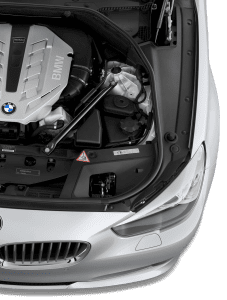 Not surprisingly, the 2011 BMW 550i and 2011 Infiniti M56 have plenty of similarities. Both are rear-drive sedans powered by sizable V8s. In this case, both are hooked to automatic transmissions, a seven-speed in the Infiniti and an eight-speed in the BMW.

Turbocharged engines are quickly becoming the norm at BMW, and now the 550i is on board. Its direct-injected 4.4-liter twin-turbo V8 produces 400 horsepower at 5,500 rpm and 450 pound-feet of torque from 1,750-4,500 rpm. Yes, that’s a massive torque curve, but it comes at the expense of the old V8’s rumbling exhaust. Now there’s little more than a muted growl, and you can’t even hear the turbos working their magic.

The 2011 Infiniti M56 uses cubic inches and plenty of revs to achieve its power. Its 5.6-liter V8 is good for 420 hp at 6,000 rpm and 417 lb-ft of torque at 4,400. It’s no dinosaur, also utilizing direct-injection and variable valve timing and valve lift for a smooth, reasonably efficient power plant. 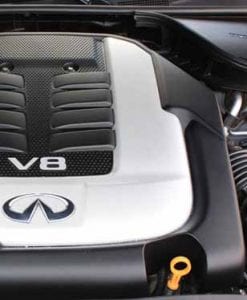 A little more driver involvement is required to get the most out of the M56’s V8, though, as its power is concentrated at higher engine speeds. The Infiniti sounds more like a sport sedan than the BMW, especially when it approaches the 6,700-rpm redline.

At our test track, the M56 was slightly quicker to 60 mph than the 550i, 5.0 to 5.2 seconds, respectively (4.7 and 4.9 seconds with a 1-foot rollout, as on a drag strip). So the BMW is slower, despite the fact that it’s capable of getting a near-perfect amount of wheelspin off the line thanks to power-braking, something the Infiniti’s brake-override system won’t allow.

So how come the BMW is slower? Might have something to do with the extra 287 pounds of ballast the 4,380-pound 550i carries versus the M56. Seriously, what’s a 5 Series doing weighing nearly 4,400 pounds? This is “EfficientDynamics?”