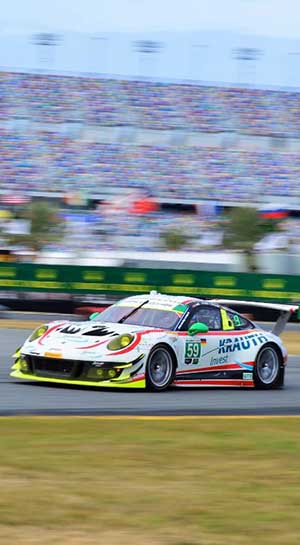 The Rolex 24 Hours of Daytona 2018 was held January 27-28 at the Daytona International Speedway in Daytona Beach, Florida. The 12-turn, 3.56-mile track is made up of portions of the NASCAR tri-oval and an infield road course. As the race began the teams and drivers set out to go the furthest in 24 grueling hours.

The No. 5 Mustang Sampling Racing Cadillac DPi of Filipe Albuquerque, João Barbosa, and Christian Fittipaldi won the 56th edition of the Rolex 24 Hours of Daytona, completing a record-breaking 808 laps of the famous Speedway in Florida. The No. 67 Ford GT Chip Ganassi Racing took victory in GT Le Mans (GTLM) and the No. 11 Grasser Racing Team Lamborghini Huracan GT3 triumphed in GT Daytona (GTD). This year’s contest embodied the intense and demanding nature of modern-day endurance racing, with drivers pushing their cars to the limit lap after lap. The competitive line-up, endless traffic, and record-breaking laps made the Rolex 24 Hours of Daytona 2018 even tougher mentally and physically than previous races — justifying the race’s status as the ultimate test of endurance.

Motorsport champions competed for every inch of tarmac around the 3.56 mile Daytona International Speedway, attracting one of the largest in-field crowds in recent years to this twice-around-the-clock epic. It was an adrenaline-filled start, during which the No. 5 Mustang Sampling Racing and No. 7 Acura Team Penske Prototype (P) cars shared the lead. When darkness fell, a surprise downpour of rain brought a flurry of pit stops as the majority of cars changed to wet weather tires. The ability of the drivers and teams to adapt to the testing conditions further emphasized the depth and quality of this world-class field. 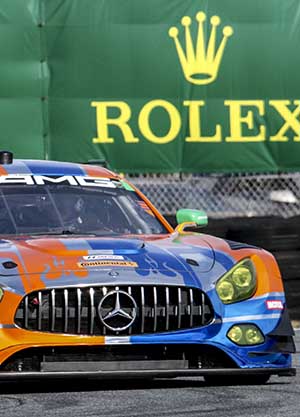 As the track dried and the race reached the halfway mark, only 20 seconds separated the top four cars. In the early hours of Sunday morning, the No. 6 Acura Team Penske suffered a mechanical failure and the No. 7 had contact with the No. 31 Whelen Engineering Racing Cadillac DPi, forcing both Acuras into the garage, putting them more than 15 laps off the lead and ending their hopes of victory. From here, it was a controlled drive to the end of the No. 5 car, finishing 1:10.544 ahead of the No. 31 to be crowned champion.

The GTD class saw a number of lead changes but finally the No. 11 Grasser Racing Team Lamborghini Huracan GT3 pulled out a healthy advantage to reach the 24-hour mark fastest. Piloted by Mirko Bortolotti, Rik Breukers, Franck Perera and Rolf Ineichen, this was the first success ever for Lamborghini in the 24 Hours of Daytona, only three years after the first race on the tri-oval of Dayton in 2016. The Michael Shank Racing Acura NSX GT3 No. 86 of Alvaro Parente, Katherine Legge, A.J. Allmendinger, and Trent Hindman finished in second place, followed on the podium by the No. 48 Paul Miller Racing Lamborghini Huracan GT3 of Andrea Caldarelli, Bryan Sellers, Madison Snow and Brice Miller. 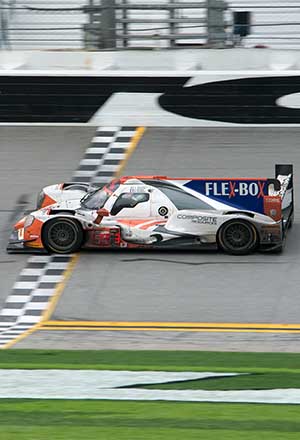 Crossing the finish line first at the Rolex 24 Hours of Daytona 2018 immortalizes the team and drivers’ performance while underlining their commitment to motorsport. Following the race, this extraordinary quest for excellence is honored with a specially engraved Rolex Oyster Perpetual Cosmograph Daytona.

After the prize-giving presentation in Victory Lane, winning driver Filipe Albuquerque said: “It was overwhelming to receive the trophy and a Rolex Daytona after such a challenging drive – that final lap felt like one of the longest of my life! The race was unbelievable, with constant traffic demanding the utmost concentration. It truly was one of the most competitive and relentless 24 hours both inside and outside the car, which makes this win all the more special.”

Scott Pruett finished ninth in the GTD class in his symbolic 24th and final 24 Hours of Daytona. With five overall victories, the American driver is tied with Hurley Haywood for the most wins at the Rolex 24 and, following the race, Scott Pruett reflected on his sports car success: “I have had an incredible journey to this point and it is very fitting to end my career at Daytona, which has become my second home. I am incredibly proud to have won five Rolex 24s and to have been rewarded each time with a Rolex – my Daytona watches will always bring back many fond memories. I still maintain, ‘it’s all about the watch’ but it’s also about the teams, cars, and fans whose dedication and passion for motorsport is unparalleled. From the bottom of my heart, thank you all for your continued support.”

Legendary racer Dan Gurney, who passed away on January 14 at the age of 86, was honored throughout the Rolex 24. Cars and drivers throughout the field paid tribute with a commemorative car and helmet decals, while the No. 30 Lola T70 race car that Gurney drove to victory in the 1966 Can-Am race at Bridgehampton in New York led the field around on its pre-race parade lap. Among Gurney’s many other achievements as a driver, team owner and constructor was his Toyota-powered Eagle Mk III Prototype, in which PJ Jones set the all-time Rolex 24 of Daytona qualifying record that still stands today.