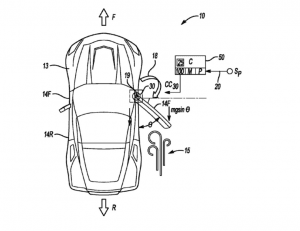 The mid-engine Chevrolet Corvette C8, also known as “Zora”, might not arrive for another six months. However, it’s still worth anticipating. Besides an improved powertrain, there’s one additional feature we know about that ‘Vette fans can get excited over. According to Mid Engine Corvette Forum, a new GM patent application filed Thursday mentions customized power doors on what is most likely the mid-engine Corvette model.

Per the patent’s wording, the doors will have not just a motor to open them, but also a controller, position sensor and rotary actuator. The devices would work in tandem to detect forces working against the door when someone tries to open it. For instance, the equipment would detect nearby obstructions to help prevent scratches on the door. It could also reinforce the door’s structure so it can better withstand strong winds and allow a person to open the door more easily.