NTT IndyCar Series cars will again be equipped with LED displays to better assist fans with understanding how each driver is performing in every session this season and to aid the efforts of the AMR INDYCAR Safety Team in attending to disabled cars.

The previous-generation matrix LED (light-emitting diode) system was discontinued midway through the 2018 season due to performance inconsistency on the cars. INDYCAR, the sanctioning body for the NTT IndyCar Series, contracted with a new manufacturer, MoTeC, to modify a system used in IMSA and apply it to NTT IndyCar Series cars for 2019.

“We know that fans at racetracks and watching from home appreciate the LED system that helps them keep track of how their favorite cars and drivers are performing,” INDYCAR President Jay Frye said. “That’s why we worked hard in the offseason to develop a more reliable system that will have even brighter displays that make them more visible to everyone. Our thanks go to MoTeC and Jon Koskey, INDYCAR’s senior director of technology, who led the effort on this important project.”

The new LED displays – which are lighter and still mount on either side of the Dallara chassis’ roll hoop for easy viewing – have been tested on track during the offseason and will be affixed to all cars starting with the season opener, the Firestone Grand Prix of St. Petersburg.

The LED system is linked to INDYCAR’s timing and scoring system that is continually updating via the numerous timing loops embedded in each series track. The 2019 LEDs provide more real-time display information as the cars cross each timing loop. Advanced RGB (red, green, blue) technology also permits the use of an unlimited number of colors for the displays. 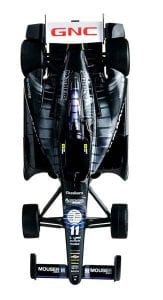 Among the items that the LEDs can display during any NTT IndyCar Series session are:

The 17-race NTT IndyCar Series season kicks off with the Firestone Grand Prix of St. Petersburg race weekend from March 8-10. All practice sessions will air live on INDYCAR Pass, the direct-to-consumer streaming product from NBC Sports Gold that will offer more than 200 hours of broadcast-quality INDYCAR programming content this season. To subscribe for the year at the discounted price of $49.99, visit the INDYCAR Pass on NBC Sports Gold site.