In partnership with the famed turbo snail-smiths at Garrett, Mercedes-Benz has announced it’s developing electrically-assisted, 170,000 rpm turbochargers to eliminate turbo lag and boost the efficiency of its combustion engines.

Forcing additional pressurized air into your combustion chambers is a highly efficient, fuel-saving way to pull extra power and torque out of an engine. Turbocharging, which uses the energy of your exhaust gases to spin up a turbine to compress and force that air in, is a particularly neat and efficient way to do it, especially when compared to supercharging, which typically uses a belt running off the crank to spin up the turbines, sipping power from the engine.

The problem with turbos, particularly juicy big ones, is that they can take some time to respond. Turbo lag is a well-known phenomenon in which a driver might be idling along going down the street, then decide to go for an overtake and lay a boot into the throttle. It can take time for the extra exhaust gas flow to spin the turbo up to a high enough speed to match the fuel intake and boost the engine, and that results in an annoying delay in the power delivery that most automakers aren’t happy with letting out the door. Instead, they often go with smaller, more responsive turbos that don’t deliver the same power and efficiency gains but are more pleasant to drive.

Hence this collaboration between Mercedes-Benz and Garrett, a company that’s been making turbos since 1954, and has more or less become synonymous with the mighty snail. Garrett has been investing in electric turbo technology in recent years, effectively using an electric motor on the back of the turbo scroll to spin the compressor turbine up to speed. This eliminates turbo lag, and the electric motor’s contribution can drop back to nothing as soon as the exhaust gases are moving through fast enough to pick up the slack. 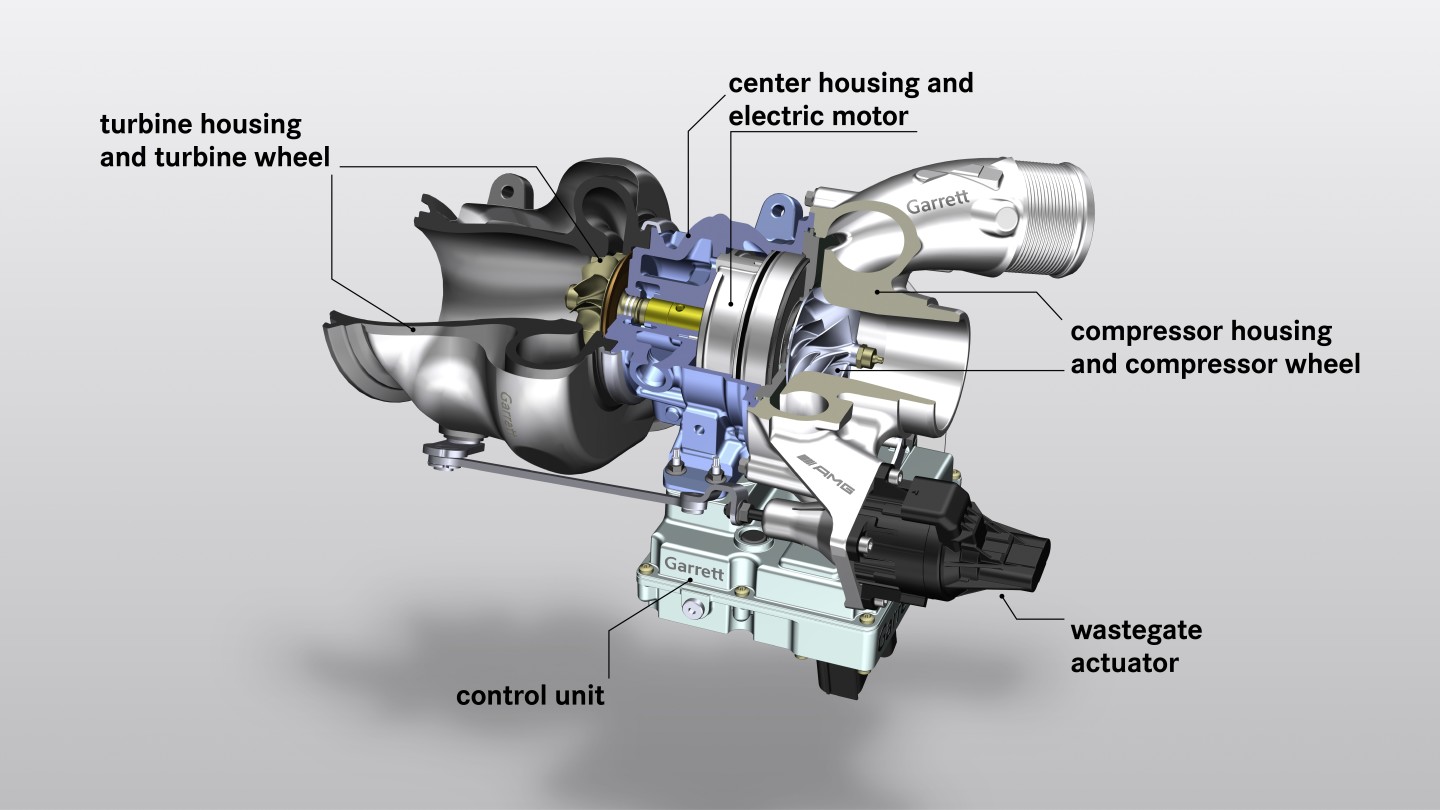 When you take your foot off the pedal, Garrett’s E-Turbos can also regeneratively brake the turbo shaft to harvest its spinning energy back into the car’s 48-volt electrical system – but Mercedes may have chosen to take things in a different direction. “Even when the driver takes their foot off the accelerator or applies the brakes,” reads a press release, “the electric turbocharger can maintain boost pressure at all times so that a continuous and direct response is assured.”

The phrasing there leaves open the possibility for multi-mode operation; perhaps this setup could keep the turbo spinning fast in a sports mode for the maximal possible responsiveness at the expense of some wasted energy, and go back to harvesting turbo spool-down energy in regular street mode driving. This is pure speculation; the Mercedes release makes no mention of it.

“We have clearly defined our goals for an electrified future,” said Tobias Moers, Chairman of the Board of Management of Mercedes-AMG. “To reach them, we are relying on discrete and highly innovative components as well as assemblies. With this move, we are strategically supplementing our modular technology and tailoring it to our performance requirements. In a first step, this includes the electrified turbocharger – an example of the transfer of Formula 1 technology to the road, something with which we will take turbocharged combustion engines to a previously unattainable level of agility.”