Not long ago my wife and I took a vacation to Savannah, GA where we were enjoying a long weekend out of town and doing a road trip review of the 2017 Mazda3 5-Door hatchback. The particular model that Mazda had supplied to us featuring the 2.0-liter Skyactive 4-cylinder mated to a six-speed manual gearbox. Sporty, a competent handler, and with that manual transmission a terrific daily driver for the automotive enthusiast looking for good mileage.

When we arrived at our hotel that evening in Savannah (the sort that only has valet parking even if you protest) I was mildly agitated but ultimately relented and turned over my keys to the valets. They unloaded the car and we went to our rooms. An hour later I happened to look out the window of our room which overlooked the boutique hotel’s front entrance and much to my surprise there say our Mazda3 still sitting in the valet stand. Thinking this odd I proceeded downstairs to inquire why it had not been parked in the adjacent private garage.

To my horror, the hotel informed me that the reason that my car had not moved was that NONE of their valets knew how to drive stick. I was blindsided by this, how could that really be? I knew that manual transmissions were becoming fewer and farther between in the wake of flappy-paddle shifters and lazy CVT’s but come on…you hired valets that can’t drive stick? It hit me hard as I recalled all the times I had joked at the “Save the Manuals” memes and apparel. It was true, it was real…younger Millenials really did apparently have no interest or knowledge of the manual shift. I felt old, I felt aggravated and most of all I felt sad.

At 35 I could still clearly remember my college days when friends worked the valet stands of local Tampa Bay area hotels and nightclubs…all of whom knew how to drive stick and in fact looked forward to it. So what the hell had happened over the last fifteen years?

The ability to drive a car with a manual transmission has long been considered an essential skill, especially for young drivers. Yet changes in the makeup of the automobile and American consumer habits mean mastering the manual may no longer be a practical necessity. 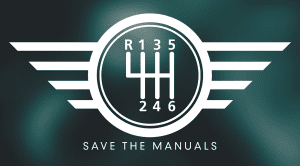 In the earliest days of the automobile industry, cars came with only one type of transmission: the manual. After General Motors released the first automatic transmission — the 1940 Oldsmobile Hydra-Matic — automobile manufacturers swiftly moved away from manuals. By 1957, 82.7% of American-made cars were equipped with automatic transmissions, according to “Ward’s 1958 Automotive Yearbook.”

Though manuals have accounted for about 4% of American car sales in recent years, experts were surprised to see the percentage jump almost 3% in the first quarter of 2012, according to a report by Edmunds.com.
The percentages may seem small, but with nearly 12.8 million cars sold in the U.S. last year, those sales add up to more than a half-million manuals.

Some manufacturers have inferred that the 6.98% “take rate,” or percentage of total cars bought, signifies a manual comeback in the consumer market. Despite earlier worry about appealing to millennials, Cristi Landry, Chevrolet’s small car marketing manager, said General Motors believes there’s a future for manuals in the U.S. consumer market. The company has gone so far as to create mechanisms meant to make manuals more appealing to drive, like the rollback-ready Hill Start Assist feature.

Chris Terry, a product communications representative for Ford Motors, said that while he’s not so sure manuals are making a comeback with average consumers, he believes some people will always want them.”Most people are just interested in getting from A to B,” Terry said. People who purchase manuals, Terry said, either loves the act of driving or are enticed by manuals’ historically lower price tag. (Some small cars like the Chevrolet Sonic, however, are more expensive as manuals.) “Manual transmissions are considered a common novelty. In the rest of the world, it just isn’t so,” Terry said. If automatics become cheaper in other countries, this may change, he said. Despite the uptick in manual take rates, not everyone is convinced manuals are making a comeback.

“The U.S. market has been moving away from manuals over the past couple of decades,” said Steve Yaeger, Nissan’s technology and motorsports communications manager. “We do not see a change in that trend in the foreseeable future.” Nissan, which only offered manual transmissions in 10 of its 19 models in 2011, had an overall manual take rate of 2.1% last year. Just over half of manual sales came from two cars — the Z Coupe and the Frontier pickup truck. “It might look like there’s a stick-shift revival underway in 2012, but we’re not so sure,” Edmunds.com Features Editor Carroll Lachnit said. “Fewer manual transmission cars on the road will mean, eventually, that there will be fewer parents or friends who know how to drive them and so fewer teachers for the next generation.”

Manuals, when driven correctly, have traditionally been more fuel-efficient than other transmission types, but new transmissions and improvements to automatics have rendered this moot in some models. The automatic Ford Focus gets slightly better gas mileage than its manual counterpart; moreover, new options like continuously variable, dual-clutch, and semi-automatic transmissions with paddle shifters, while expensive, can make up for their price tag with fuel efficiency. “Almost all the high-mpg cars you see advertised on TV, whether they’re hybrids or a Chevy Cruze, get their best mileage with one of these other types of transmissions,” Cars.com Managing Editor David Thomas said. It’s important to remember that gas prices, while high, have been high for the past few years — and manual take rates haven’t skyrocketed in that period of time.

For some consumers with children, technological advancements in other transmissions are outshined by the perceived experiential benefits of the manual. Margaret Menotti, an account manager in Boston, is wary of teaching new drivers in automatic cars. “We made both of our children learn to drive on a stick,” Menotti said. “And it’s still the only thing they drive,” Menotti said the prevalence of manuals overseas was a major factor in her decision. “It takes time and practice, but it’s worth it,” said Christina Menotti, Margaret’s daughter. “Once it clicks you don’t even think about it.” Many parents also falsely believe that having their children drive manuals will keep them safer because it’s more difficult to text or talk on the phone while driving. But neither is impossible, and you can’t control other drivers on the road.

While there remain parents who want their kids to drive stick, most driving schools consider such requests anomalous, Lachnit of Edmunds.com said. “Chances are at some point they are going to be exposed to a car with a standard manual transmission,” added Robert Lindsay of The Driver Training Group, a driving school based in Washington state. “Depending on where the teen lives and the types of cars they are allotted to drive, it is relevant and necessary for some and not others. Our teens tell us unless there is a direct need, they can learn later in life.”

Lindsay said no more than 15% of his school’s students come from families owning manuals and that fewer students actually drive them. Overall, the school gets only about two or three manual training requests a month. “I think the old school thought is, ‘I learned on a stick back in the day, so my kid should,'” Lindsay said, “but that doesn’t mean it’s right. Those that are into cars are much more likely to want to learn.”
His school starts all of its students in cars with automatic transmissions if they do not request otherwise, and does not keep a manual car in its fleet, he said.

Drive Team’s manual student population has held steady at 15% for the last five years, and parents usually are the ones who ask for their children to learn manual rather than the children themselves, Stout said. Still, Lindsay and Stout concur with those who think learning manuals can make a student a better driver than those who simply drive automatics. Stout added that the desire has to be there.

“It’s wonderful for them to learn it, but you have to want that. You have to want to play golf to go take a golf lesson.” He’s not so sure that matters to all parents, as some seem disinclined to make their children the independent drivers they should be. “I’ve got parents asking me why we teach their kids to parallel park when the car does it for you,” Stout said.