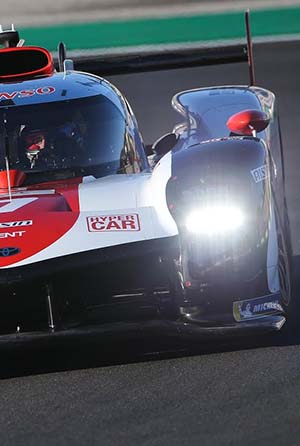 The future of the 24 Hours of Le Mans is resolving into shape. On Friday, Toyota Gazoo Racing unveiled its new GR010 Hybrid, an all-wheel-drive prototype that will compete in the overall win at the annual French race later this year (pandemic willing). It’s the first competitor to break cover from the new Le Mans Hypercar (LMH) class, which replaces the old LMP1h category that shone so brightly for a few short years in the middle of the last decade.

LMP1h gave rise to some of the fastest and most technologically advanced racing cars the world has ever seen. But it wasn’t cheap, and by 2018 Toyota was all that was left, its cars hobbled by ACO (the race organizers) to give the non-hybrid LMP1 privateer teams a fighting chance.

Car manufacturers’ interest in racing series waxes and wanes, and it doesn’t require much imagination to see how a combination of global economic uncertainty and an expensive ruleset could negatively impact participation. The ACO’s answer was a new category called the hypercar, which would open the doors to racing versions of those seven-figure slices of unobtainium-on-wheels like the Adrian Newey-designed Aston Martin Valkyrie—albeit running at much lower power levels than the unrestricted road cars.

The new LMH rules don’t offer quite the same technical freedom as dearly departed LMP1h. But they do have a bit more leeway than another ruleset called LMDh (for Le Mans Daytona hybrid—more on this later), in that competitors are allowed to use the front wheels to capture and deploy up to 200kW (268hp) of kinetic energy from the hybrid motor-generator unit (MGU), with an internal combustion engine (ICE) powering the rear wheels. Overall power output is capped at 500kW (670hp) to keep lap times at Le Mans within a sane time range, and the MGU can only be activated above 74.5mph (120km/h) in the dry. (The activation threshold is higher if it’s raining and the car is on wet-weather tires.)

As it turns out, interest among the road-going hypercar fraternity has been underwhelming; Aston Martin has shelved any plans to race the delayed Valkyrie, McLaren has said no thanks to LMH, and we doubt we’ll see anyone try to enter a Gordon Murray Automotive T.50 or one of those Mercedes-AMG Project ONEs if and when that last car is ever ready for the public. Boutique brand Glickenhaus is readying an LMH entrant, as is the ByKolles team, which is respected more for its dogged perseverance than for a long list of racing success.

But two big OEMs are on board for LMH, even if they’re using the ruleset to build vehicles that are racing cars first and foremost. One of those is Peugeot—now part of Stellantis—which will enter the 2022 World Endurance Championship with an as-yet-unseen prototype powered by a recently revealed Hybrid4 powertrain that marries a 500kW (670hp) 2.6L twin-turbo V6 driving the rear wheels and a 200kW (268hp) MGU at the front axle. (Again, overall power output is capped at 500kW, so the car’s brains won’t ever let it use all 500kW from the ICE at the same time as all 200kW from the MGU.)

Toyota Gazoo Racing is a year ahead of Peugeot, and its GR010 is more than just a hybrid powertrain—it’s a complete car. If you were hoping for something that looks like a high-end road-legal sports car, I hate to be the bearer of bad tidings, but the GR010 looks like an endurance prototype first and foremost, with a narrow bubble cockpit that does better things for the frontal area than it does passenger room.

The Toyota GR010 uses a 200kW MGU at the front axle, with a 500kW 3.5L twin-turbo V6 internal combustion engine driving the rear wheels. While the GR010 bears at least a passing resemblance to the outgoing TS050, it’s 32 percent less powerful and 357lbs (162kg) heavier, which should equate to a 10-second slower lap time at Le Mans.

Endurance racing wouldn’t really be endurance racing if there wasn’t an overly complicated set of technical rules for fans to grapple with, and the coming seasons will be no exception when LMH is joined in 2022 by LMDh.

As stated, the D in LMDh stands for Daytona, and it’s a new ruleset for North America’s IMSA series (which includes the Rolex 24 at Daytona and the 10-hour Petit Le Mans races, among others), which will also allow entrants to compete at Le Mans each year. Manufacturers have wanted to race prototypes for overall wins in IMSA, but none has had the appetite to spend hundreds of millions of dollars to do so. So IMSA is evolving its successful DPi class to add a spec hybrid system and more freedom to style the cars according to an OEM’s road-car lineup.

LMDh and LMH are both capped at 500kW (670hp), but LMDh only allows for a spec 50kW (67hp) MGU, which has to recover and deploy energy to the rear wheels only (albeit at any speed, unlike LMH). Additionally, OEMs are required to use one of four base chassis, as is currently the case in DPi and LMP2. This should make the category even cheaper to enter than LMH, although it’s a category where arguments about racecar-to-road technology transfer will be more than a little tenuous.

I’m expecting to see quite a few OEMs sign on to LMDh, but so far the only two definites are Audi, which enters in 2022, and Porsche, which arrives in 2023. This means the round-the-clock race in France that year should be quite the event. I’m willing to bet we’ll even have gotten a grip on COVID-19 by then, which means some of us might be able to watch it in person.