The Lamborghini Countach is widely considered one of the most iconic supercars ever made, however, only a few people are aware of how significant the one-off Countach Evoluzione was, not only for Sant’Agata but for the whole automotive industry.

Launched in 1987, the Countach Evoluzione was designed by Lamborghini’s “Composite Department” under the leadership of its chief engineer, young Horacio Pagani. Yes, this is the same guy who in 1992 would start his own company that gave us the Zonda and Huayra exotic hypercars. Back in the late ’80s, the Evoluzione prototype was designed as a testbed for new materials and new technologies, many of which would become the norm for modern supercars and hypercars.

Let’s start with the weirdness of the exterior which looks like it came out from an 80’s sci-fi blockbuster. While it does have the form of a Countach, the Evoluzione was a whole different animal. The unpainted body panels and the redesigned aero kit were made of composite materials (Kevlar and carbon fiber) and aluminum for weight reduction. Those words may sound familiar to the millennials, however, back in 1987 and before the launch of the rival Ferrari F40 later that year, such extensive use of exotic materials was simply unheard of. Another cool feature is the carbon fiber wheel covers which were a lot more aerodynamic than the stock wheels but didn’t do a great job in cooling the brakes – thus they were later removed. 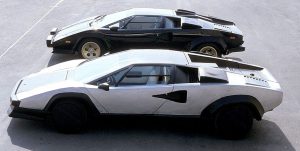 And as you would imagine, the “Composite Department” didn’t rely on cosmetics, but also developed a brand new chassis. Instead of using the traditional steel space frame, the Evoluzione was built on a one-piece honeycomb structure made of Kevlar and carbon fiber. Besides being considerably lighter, the new chassis increased rigidity which translates to better handling and safety.

The extensive redesign of the chassis and bodywork together with the spartan interior that lacks soundproofing and any kind of comfort equipment (this was a prototype, after all) resulted in a total weight of 980 kg! To get a better idea of the scale of weight reduction, the Evoluzione was half a tonne lighter than the production version!

The sub-tonne weight was combined with the more powerful naturally aspirated 5.0-liter V12 engine producing around 490 hp (365 kW / 497 PS), allowing for a vastly improved weight-to-power ratio. As a result, performance was mind-blowing for its time, with a 0-62 mph (0-100 km/h) acceleration in the low 4-second territory and a top speed of 330 km/h (205 mph). The latter was proved in the Nardo track during testing and would make it the fastest car at the time if it were in production. 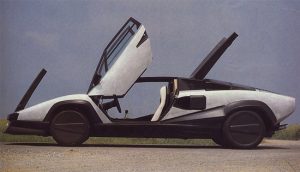 But the technical revolution didn’t stop there. The Countach was equipped with an electronically controlled suspension that could alter ride height and damper stiffness with the touch of a button, ABS brakes, a redesigned gearbox gate and shifter for quicker changes, and an all-wheel-drive system, making it absurdly faster in the corners, safer, and more predictable. Who could imagine that a Countach was equipped with systems that are so common in today’s performance cars?

While the Countach Evoluzione was never intended for production, it provided valuable insights for future Lamborghinis and many of its technologies would later find their way into the market. Unfortunately, following the testing and development period, the unique prototype was used for a crash test, to prove the efficiency and durability of its revolutionary structure. This means there is currently no Countach Evoluzione in existence, besides some expensive 1:43 scale models.

After proving his theory on the Countach Evoluzione, Horacio Pagani wanted Lamborghini to make its own carbon fiber parts with an autoclave, but the management at the time didn’t agree on this investment. This was probably one of the main reasons the ingenious engineer decided to leave the company and start his own firm, foreseeing the future of supercars and hypercars. Judging from the fact that the Lamborghini of today is heavily based on lightweight materials and carbon fiber technology, it is no secret that he was right. 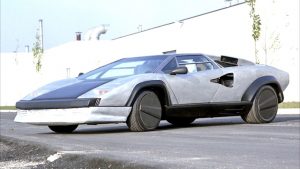 Instead of following Horacio’s dream and revolutionizing the auto industry, Lamborghini was acquired by Chrysler, launching probably the worst concept car bearing its name – a four-door mid-engined sedan called Portofino.

Back to the Countach storyline, while it had launched in LP500 prototype form at the 1971 Geneva Motor Show, the production version LP400 followed in 1974 replacing the Miura. Over the years, Lamborghini kept evolving the Countach to stay up to date with the competition, giving it more powerful engines, improved chassis setup, added equipment, and more pronounced aero components complimenting the angular shape of the original penned by Italian master Marcello Gandini.

After the initial LP400 (1974) the Lamborghini Countach line would continue with the LP400 S (1978), LP500 S (1982), LP5000 QV (1985), and the final Countach 25th anniversary (1988), providing youngsters with fresh material for their bedroom wall posters. Believe it or not, the second mid-engined V12 flagship from Sant’Agata (after the Miura) stayed in production from 1974 until 1990, with its numerous revisions selling a total of 1,983 units – this is how small Lamborghini was back then. Finally, the Countach was succeeded by the Diablo, which then gave way to the Murcielago and the Aventador, each with a decade-long production run.