The new Genesis G70 Shooting Brake was on display last weekend at the Goodwood Festival of Speed for those in attendance to appreciate. Without question, it’s one of the best-looking reveals in recent months and it’s a shame the South Korean luxury brand has no intention of bringing it stateside. Wagons have long been out of favor here beginning with the rise of minivans. Crossovers fired the fatal bullet. Even Volvo is getting out of the US wagon business. But things are different in Europe.

Heading to Europe. No looking back now. Follow us for the latest launch news #GenesisEurope #ItsAboutTime pic.twitter.com/EM4Hm8DMa4

Speaking to Automotive News Europe, Genesis’ European chief, Dominique Boesch, couldn’t contain his excitement over the vehicle and believes others there will feel the same. “The body shape is the perfect demonstration of how committed we are to Europe,” he said. “It will reflect the structure of the market in Europe.”

He believes the shooting brake will outsell the sedan, but the GV70 will ultimately be the best-seller of the three that are set to go on sale in Europe in the coming months. The G80 sedan and GV80 SUV are already on sale in the UK, Germany, and Switzerland. A greater European expansion is planned.

One thing Genesis has not decided on is whether to offer the G70 Shooting Brake with the sedan’s optional 3.3-liter twin-turbocharged V6 that’s offered in the US. It has 365 horsepower and 376 lb-ft of torque compared to the base 2.0-liter turbo’s 255 hp and 260 lb-ft. A 2.2-liter diesel with 199 hp and 324 lb-ft will also be available to European customers, but no hybrid or plug-in hybrid variants are planned.

Significant efforts went into designing the G70 Shooting Brake. It’s much more than just a basic wagon version of a sedan. Not only are its exterior dimensions identical to the sedan’s, but it also has quite a bit more cargo space (40 percent more, to be precise). The rear seats now boast a 40:20:40 split-folding setup to further expand space. The Shooting Brake also arrives just in time for the sedan’s mid-life refresh. Updated exterior styling includes the brand’s new signature split headlights and taillights. Also, notice the wagon-only floating integrated rear spoiler.

Pricing has yet to be announced and we find ourselves agreeing with Boesch’s prediction. We want one more than ever. 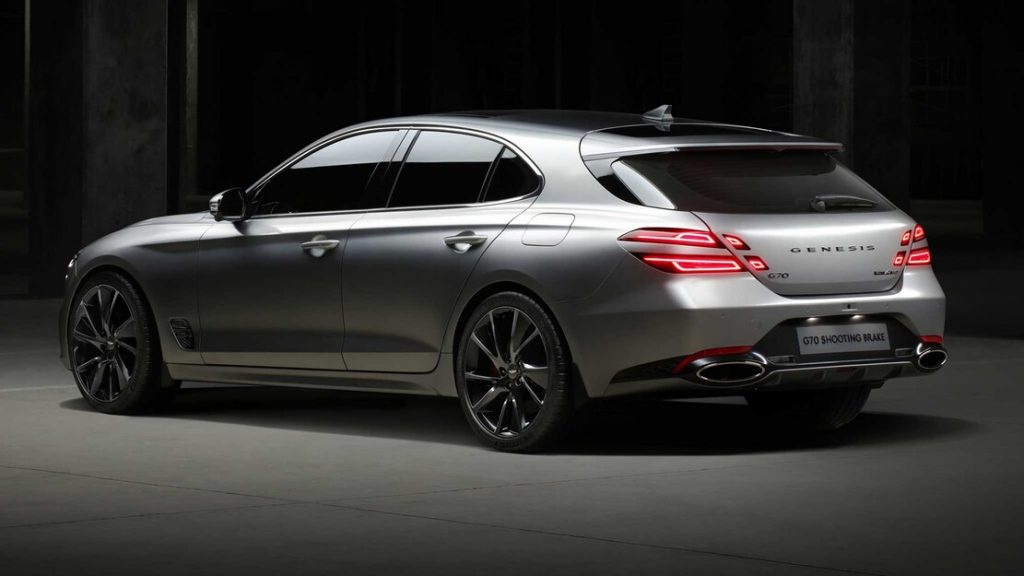