Here’s a question we get on a semi-regular basis: “What the hell is a shooting brake?” If you’ve spent any time in the car world, obsessed collectors and casual fans alike all seem to ruminate about the elusive shooting brake. It is one of those terms we throw around and everyone just sort of nods in agreement, but unless you have taken the time out of your day to hunt down the meaning, origin, or other examples; you’ve likely just looked right past it. So, If you were or are now aware of any modern shooting brakes, you are probably wondering how, exactly, we got from a hunting party transport to the long-cabin sporty sedans or coupes lusted after today. Thankfully, the evolution can actually be traced with the long and the short being that, much like most things in the automotive enthusiast world the history of the shooting brake is a bit complicated… So, let’s start at the beginning. 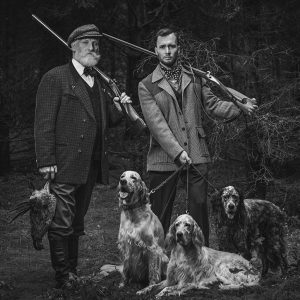 The term “shooting brake” comes from turn-of-the-century England, where it referred to a car used to transport a hunting party and its gear. “Brake” referred to a chassis that was used to break in horses. It eventually just came to refer to early wagons in general.

In the latter half of the 20th century, automakers were looking at a way to distinguish new cars like the Volvo 1800ES and the Reliant Scimitar GTE from larger five-door wagons and boxier hatchbacks. Looking back at the old school shooting brakes they noticed that the originals all only had two doors. Thus was the modern idea of a shooting brake born as a low, sleek two-door wagon.

The press took notice with The New York Times describing the body style as “a sleek wagon with two doors and sports-car panache, its image entangled with European aristocracy, fox hunts and baying hounds” in 2006. Peter Horbury, the designer who led Volvo’s ’90s resurgence and who has recently returned to the company, describes the concept well:

“A Shooting Brake is not your basic two-door hatchback, a body style with different proportions; the hatchback tends to be squatty, while a shooting brake is sleek and has a very interesting profile.’ It makes use of the road space it covers a little better than a normal coupé and also helps the rear person with headroom. Especially in America, every member of the family has their own car. The occasional use of the rear seat means you can do one of these cars, even if such a wagon lacks the everyday practicality of four doors.“

In every automotive critic is an internal war; on one hand, we want every car to be a hardcore, mid-engined monster on a stiff suspension that gets about four miles per gallon on account of a well-tuned twin-turbocharged 5.2L V10 (we’re looking at you Audi R8). And on the other, we critically see the need for cars that can tackle all of life’s situations. Most people can only afford one car, so that one car needs to be interesting, look amazing and quite literally do everything.

The shooting brake, in its modern format, can be thought of as a 2+2 sports coupe with an extended roofline. Properly done, it retains the low roof and sleek lines of a coupe, thus retaining the sex appeal, but adds some of the practicality of a wagon. There’s a ton more cargo space, and the rear seats are suitable for people with heads, but the loss of sex appeal inherent with those two practical concerns is conveniently not there. Cars like the VW Scirocco can be everyday cars without compromising either fun or running into constant annoyances of practicality.

Despite that, from a critical point of view, they’re fantastic! The simple fact is there aren’t many shooting brakes on the market. In the U.S., the Volvo C30 was axed recently, VW won’t bring us the Scirocco, there’s no point in even imagining that we’d be able to buy a Renault Mégane RS or the all-new Genesis G70, and the Mercedes-Benz CLS Shooting Brake is actually just a wagon. The only new shooting brake you can buy in the USA right now is the Ferrari FF, and that’s certainly not attainable.

Here’s the key to where the press’ enthusiasm turns into a fetish: we like shooting brakes, we feel just influential enough to have an inflated opinion of the value and power of our own opinions, and we’re constantly denied the few shooting brakes that do exist. The constant yearning without even so much as a press drive, since the American press certainly doesn’t do anything for French sales, leads to this weird excitement whenever something like the Volvo Concept Estate is revealed.