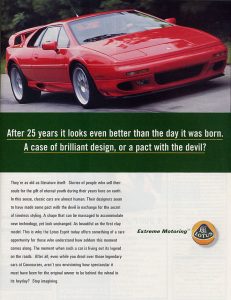 Throughout its 28 year history, there were many variations of the Lotus Esprit but all of them can be grouped into two design groups.

The first category is what is commonly referred to as the Giugiaro Esprit; named after the original Italian designer of the car, Giorgetto Giugiaro. The easiest way to identify those cars is if the car was built before 1988 MY (model year) then it is a Giugiaro Esprit. Styling-wise, the Giugiaro Esprit is distinguished by sharp angles and a wedge shape.

In 1988, designer Peter Stevens who is also famous for designing the McLaren F1 supercar softened the crisp edges of the Esprit. It was more modern-looking and sexier from a design perspective.

The Esprit was built completely by hand. The Esprit production line was established back in 1976. Until the end of production in 2004, nothing changed much since those days a quarter of a century ago. There were only 21 people on the line. Each car took about 584 man-hours to assemble.

With multiple people working on the car, total assembly was accomplished in about one week. One car rolled out of the assembly line every business day. Upon completion, each vehicle was driven on the test track.

After the test drive, the car was put on a lift and thoroughly inspected and adjusted. Afterward, the car was test-driven a second time to verify everything was perfect.

Although the Esprit was developed over 30 years, the basics remained the same throughout its life, all the way from the S1 through to the very last V8 02. The basics are pure supercar with its two-seater, mid-engined, rear-wheel-drive layout, and that wedge shape.

The Esprit was built around a steel backbone chassis, with the body panels made of Glass Fibre. All Esprit engines were designed and produced by Lotus from the first 2.0 liter inline 4 to the strong V8. Gearboxes on the other hand were sourced from other manufacturers. This was done as Lotus couldn’t afford to buy the tools to make their own gearboxes due to the small Esprit sales volumes. 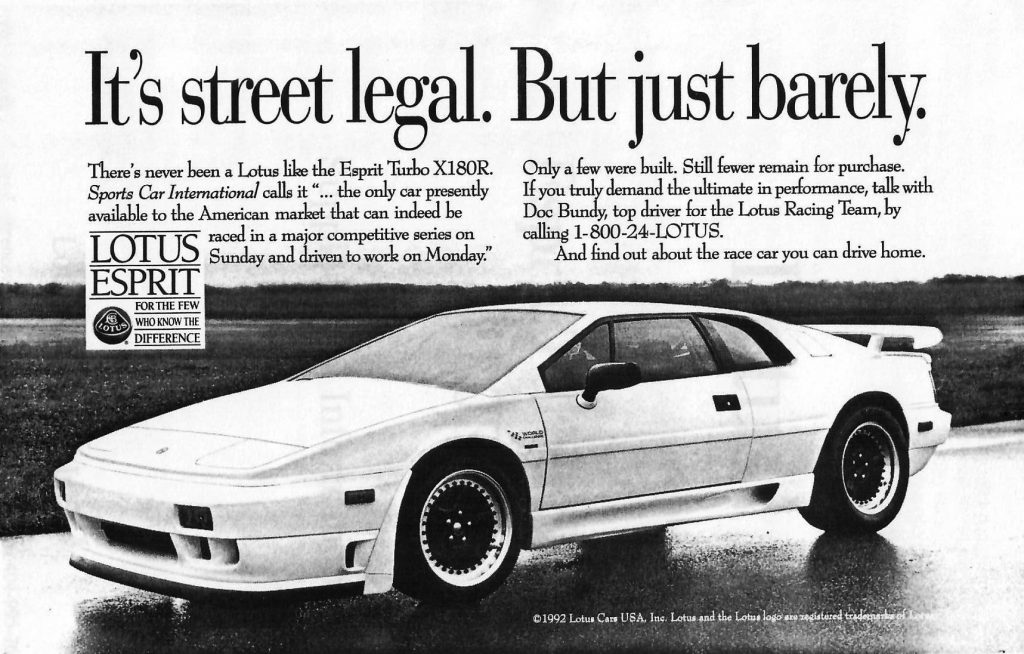 The introduction of a V-8 powered Esprit in 1996 was the biggest news for the car in some time. The flat-plane-crank-style engine was of Lotus design, displacing 3.5 liters, with twin Garrett turbochargers. Changes were needed to the aging Renault five-speed transaxle to maintain reliability with the twin-turbo V-8’s 350-horsepower output. The 0-to-60-mph sprint dropped once again, this time to the low-four-second range.

This 1999 Lotus Esprit is reportedly one of just 123 V8 examples produced for the model year, and it is finished in black over tan leather and powered by a twin-turbocharged 3.5-liter V8 paired with a five-speed manual transaxle. Equipment includes three-piece OZ Racing wheels, Brembo brake calipers, front and rear spoilers, air conditioning, and an Alpine stereo. The fiberglass body is finished in black and features a front splitter, ducted side skirts, and a fixed rear spoiler. A removable roof panel is fitted and shown removed in the gallery below.