Where does the extra power come from?
Turbochargers give a car more power, but that extra power is not coming directly from the waste exhaust gas—and that sometimes confuses people. With a turbocharger, we harness some of the energy in the exhaust to drive the compressor, which allows the engine to burn more fuel each second. This extra fuel is where the car’s extra power comes from. All the exhaust gas is doing is powering the turbocharger and, because the turbocharger isn’t connected to the car’s crankshaft or wheels, it’s not directly adding to the car’s driving power in any way. It’s simply enabling the same engine to burn fuel at a faster rate, so making it more powerful. 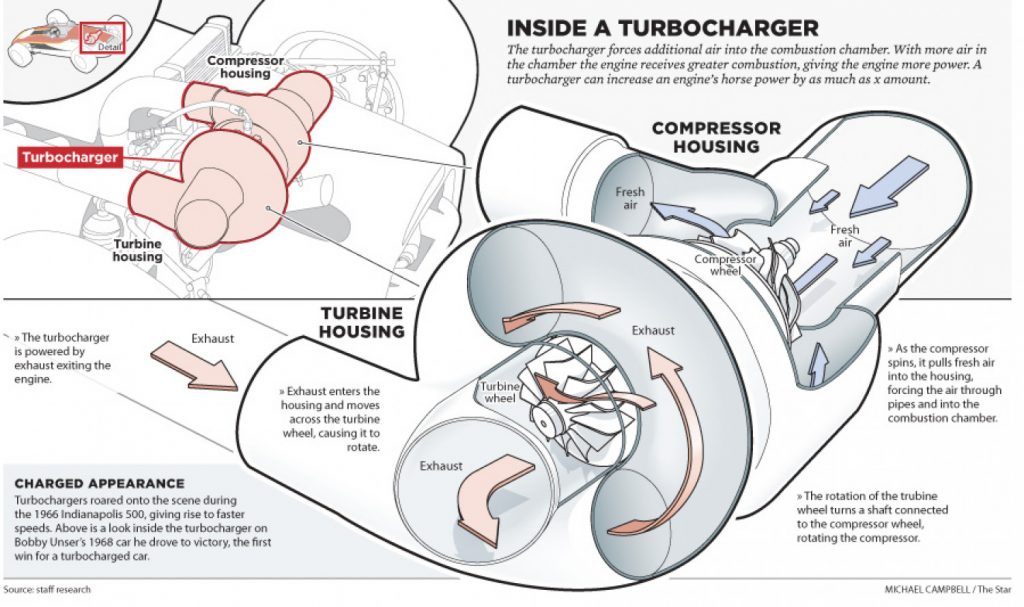 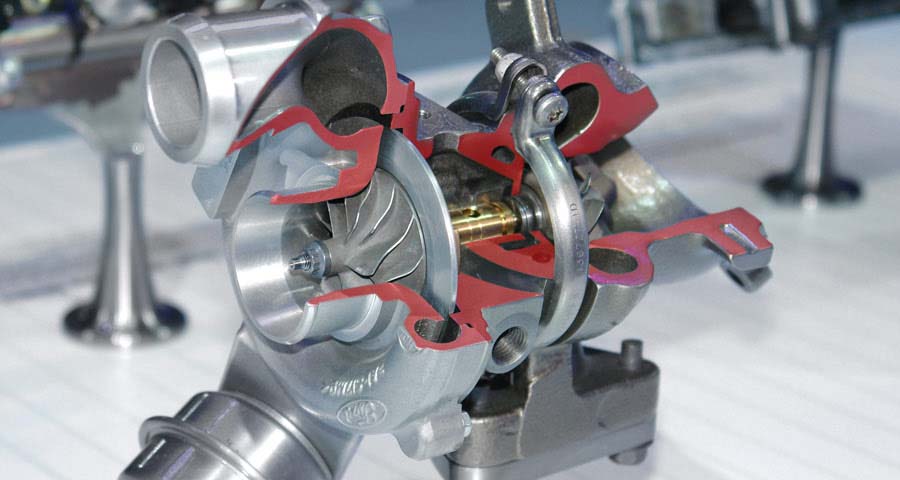 Advantages and disadvantages of turbochargers
You can use turbochargers with either gasoline or diesel engines and on more or less any kind of vehicle (car, truck, ship, or bus). The basic advantage of using a turbocharger is that you get more power output for the same size of engine (every single stroke of the piston, in every single cylinder, generates more power than it would otherwise do). However, more power means more energy output per second, and the law of conservation of energy tells us that means you have to put more energy in as well, so you must burn correspondingly more fuel. In theory, that means an engine with a turbocharger is no more fuel-efficient than one without. However, in practice, an engine fitted with a turbocharger is much smaller and lighter than an engine producing the same power without a turbocharger, so a turbocharged car can give better fuel economy in that respect. Manufacturers can often now get away with fitting a much smaller engine to the same car (such as a turbocharged V6 instead of a V8, or a turbocharged four-cylinder engine instead of a V6). And that’s where turbocharged cars get their advantage: working well, they might save up to 10 percent of your fuel. Since they burn fuel with more oxygen, they tend to burn it more thoroughly and cleanly, producing less air pollution. 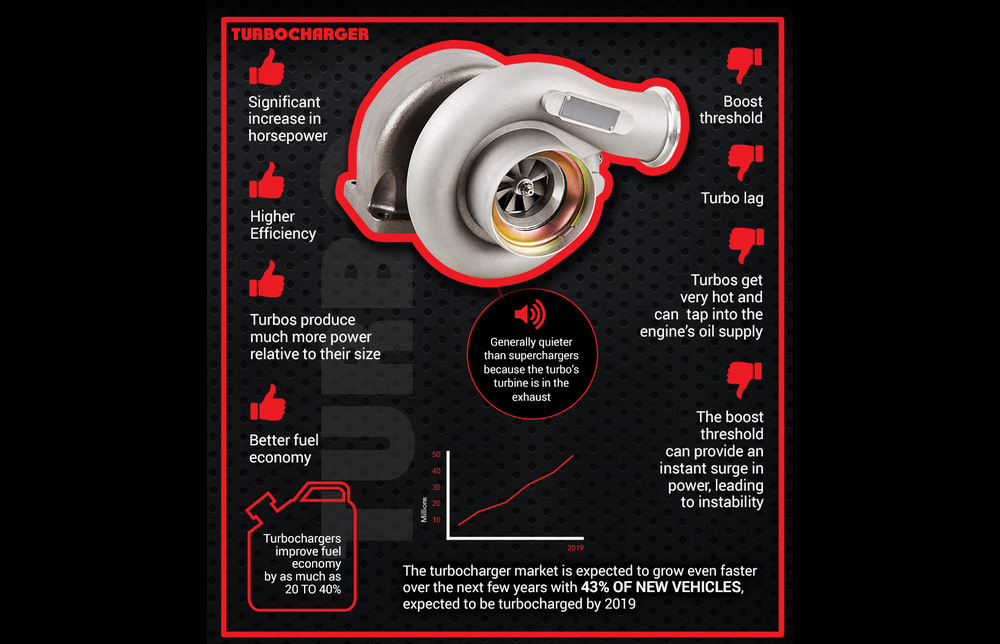 More power for the same engine size sounds wonderful, so why aren’t all engines turbocharged? One reason is that the fuel economy benefits promised by early turbochargers didn’t always turn out as impressively as manufacturers (eager to seize any marketing advantage over their rivals) liked to claim. One 2013 study, by Consumer Reports, found small turbocharged engines giving significantly worse fuel economy than their “naturally aspirated” (conventional) counterparts and concluded: “Don’t take turbocharged engines’ eco-boasts at face value. There are better ways to save fuel, including hybrids, diesel, and other advanced technologies.” Reliability has often been a problem too: turbochargers add another layer of mechanical complexity to an ordinary engine—in short, there are quite a few more things to go wrong. That can make maintenance of turbos significantly more expensive. By definition, turbocharging is all about getting more from the same basic engine design, and many of the engine components have to suffer higher pressures and temperatures, which can make parts fail sooner; that’s why, generally speaking, turbocharged engines don’t last as long. Even driving can be different with turbos: since the turbocharger is powered by the exhaust gas, there’s often a significant delay (“turbo lag”) between when you put your foot on the accelerator and when the turbo kicks in, and that can make turbo cars very different (and sometimes very tricky) to drive. In the last few years, leading manufacturers such as Garrett and BorgWarner have been busily developing partly or fully electric turbochargers to solve this issue; Garrett’s offering is called the E-Turbo, and Borg’s is the eBooster®.

Who invented the turbocharger?
Whom do we thank for turbochargers? Alfred J. Büchi (1879–1959), an automotive engineer employed by the Gebrüder Sulzer Engine Company of Winterthur, Switzerland. Much like the turbocharger I’ve illustrated up above, his original design used an exhaust-driven turbine shaft to power a compressor that forced more air into an engine’s cylinders. He originally developed the turbocharger in the years before World War I and patented it in Germany in 1905, but continued to work on improved designs until his death four decades later.

Büchi wasn’t the only important figure in the story, however. Some years earlier, Sir Dugald Clark (1854–1932), Scottish inventor of the two-stroke engine, had experimented with separating the compression and expansion stages of internal combustion using two separate cylinders. This worked a bit like supercharging, increasing both the airflow into the cylinder and the amount of fuel that could be burned. Other engineers, including Louis Renault, Gottlieb Daimler, and Lee Chadwick, also experimented successfully with supercharging systems. 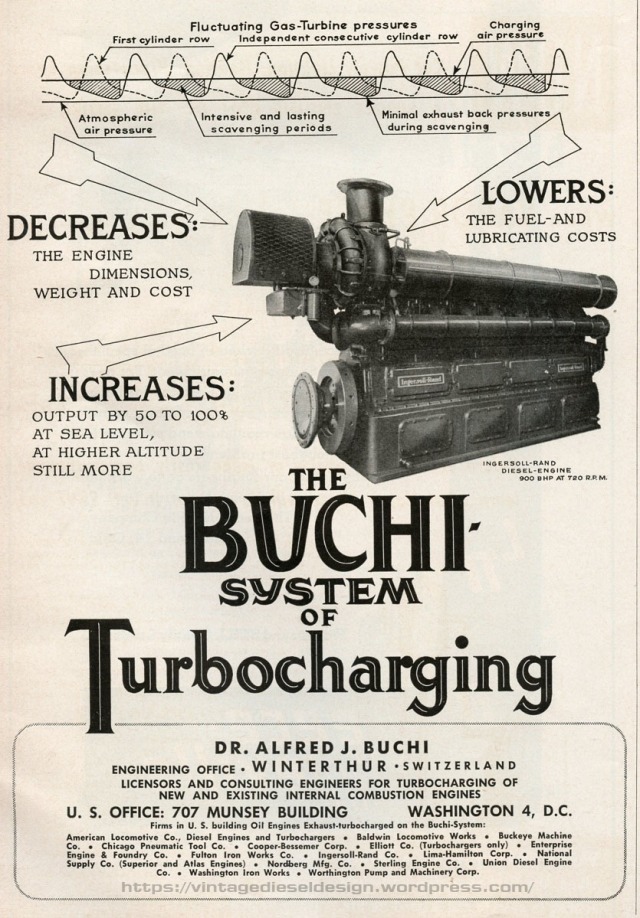