Sebring Raceway is one of the oldest continuously operating race tracks in the United States, its first race being run in 1950. Many consider Sebring to be one of the classic race tracks in North American sports car racing, and the 12 Hours of Sebring, 24 Hours of Daytona, and 24 Hours of Le Mans to be the trifecta of endurance racing.

The raceway occupies a portion of Sebring Regional Airport, an active airport for private and commercial traffic that was originally built as a WWII Army Air Forces training base called Hendricks Field.

History
Sebring Raceway occupies the site of Hendricks Army Airfield (a training base for B-17 pilots in operation from 1941 to 1946). After the war, Russian-American aeronautical engineer Alec Ulmann was seeking sites for converting military aircraft to civilian use when he discovered the potential in Hendricks’ runways and service roads to stage a sports car endurance race similar to the 24 Hours of Le Mans, a race Ulmann was inspired to somewhat re-create in the United States. Sebring’s first race was held on New Year’s Eve of 1950, attracting thirty race cars from across North America. The Sam Collier 6 Hour Memorial race was won by Frits Koster and Ralph Deshon in a Crosley Hot Shot that had been driven to the track by Victor Sharpe.

The first 12 Hours of Sebring was held on March 15, 1952, shortly growing into a major international race. In 1959, the track hosted the U.S.’ first Formula One race (the successor to historic European Grand Prix motor racing), held as that year’s installment of the historic United States Grand Prix competition. However poor attendance and high costs relocated the next U.S. Grand Prix to Riverside International Raceway in Southern California. 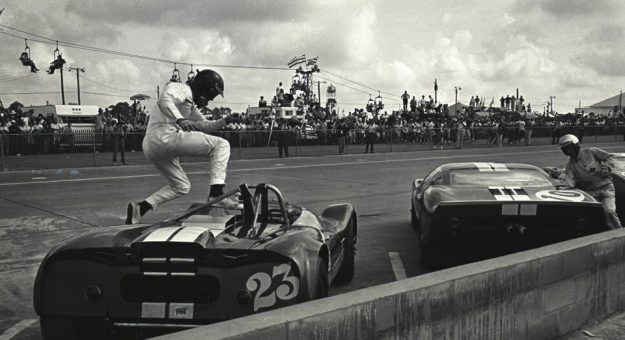 For much of Sebring’s history, the track followed a 5.2-mile (8.4 km) layout. After a disastrous 1966 12 Hours with five fatalities, the track was widened in parts and also lengthened a total of 50 yards (46 m) for 1967 with the removal of the Webster Turn between the hairpin and the top of the track and replacement with the faster Green Park Chicane, further down the track. This was closer to the hairpin and allowed a flat-out run through a very fast corner to the top of the track and the runway. This was done to move the track off the dangerous Warehouse Straight and the warehouses, hangars, and airplanes flanking it; a crash during that 1966 12 Hours involving a privately entered Porsche that went into one of the warehouses (this area was off-limits to non-track personnel) and into a crowd, killing four spectators.

The circuit was changed and shortened in 1983 to allow simultaneous use of the track and one of the runways, and major changes in 1987 allowed the use of another runway. Further changes in 1991 accommodated the expansion of the airport’s facilities, allowing the entire track to be used without interfering with normal airport operations and bringing it close to its current configuration. The hairpin was removed in 1997 due to a lack of run-off, and replaced with what became known as the “safety pin”. Gendebien Bend was also re-profiled to slow the cars’ entry to the Ullman straight. 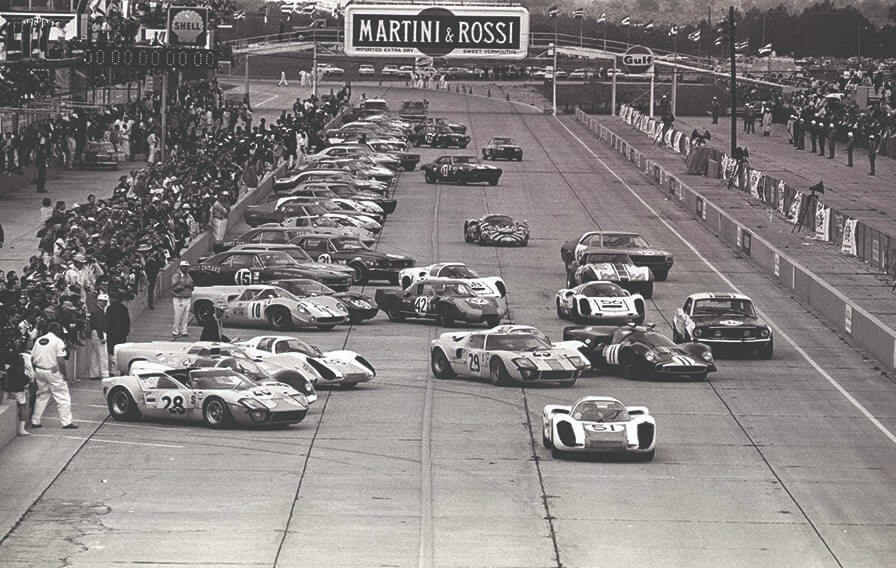 Track Configuration
Sebring International Raceway consists of three tracks: the Full Circuit, the Short Circuit, and the Club Circuit. The course of the track itself is 3.74 miles (6.02 km) long. It is a seventeen-turn road course with long straights, several high-speed corners, and very technical slower corners. Many of the turns and points along the track are named for the early teams and drivers. Due to Florida’s flat nature, there is very little elevation change around the track and little camber on the surface, providing a challenging track for drivers, especially when it rains.

Sebring is renowned for its rough, bumpy, and changing surfaces. The course still runs on old sections of World War II-era landing fields that were constructed of concrete sections with large seams. The transitions between sections are quite rough and often, sparks fly from the undercarriages of the cars as they traverse them. Much of the track has intentionally been left with its original concrete runway surface. The 12 Hours of Sebring is renowned as a race that is even harder on machinery and drivers than Le Mans and is seen as an ideal preparation run for the famed French race.

The track surface has 3.04 miles (4.89 km) of asphalt and 0.7 miles (1.1 km) of concrete. Mario Andretti, a 3-time 12 Hours winner, said that one of the hardest parts about the original Sebring track was “finding the track, to begin with.” There had been many accounts of drivers retiring due to accidents at night, quite simply because they got lost on the runway sections and couldn’t find the track again. Some drivers got lost even during the day, mostly because the track was poorly marked down with white lines and cones. 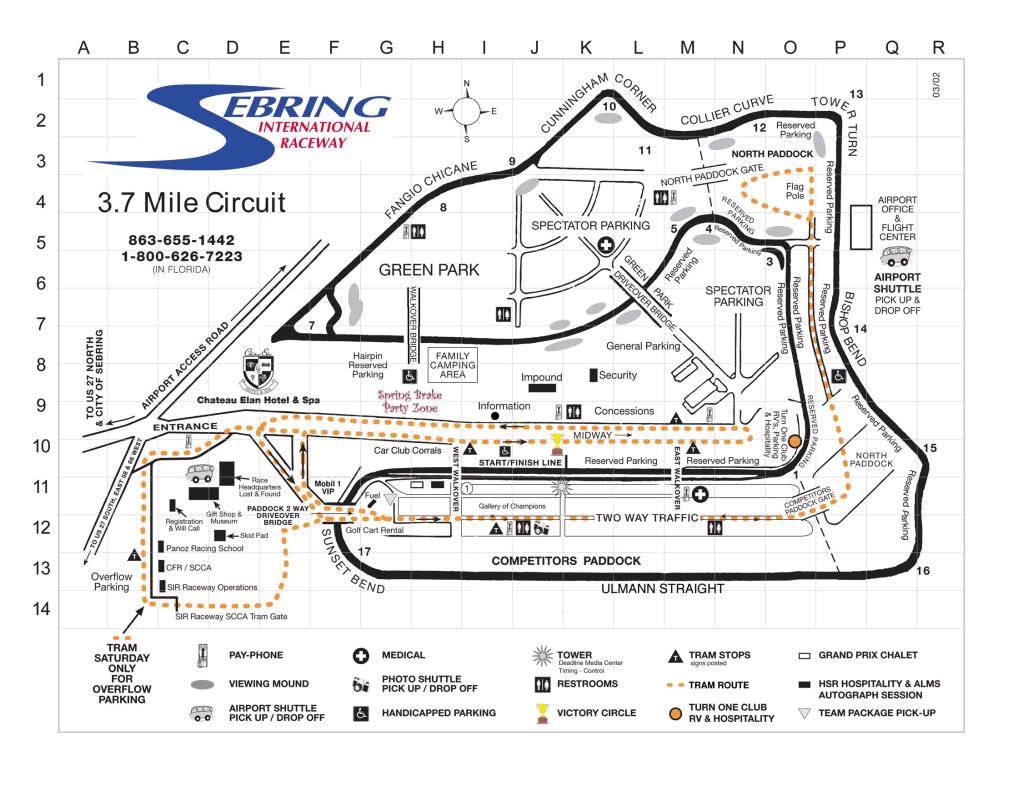 Events
Sebring is most notable for hosting the 12 Hours of Sebring, sanctioned by the FIA and IMSA, as part of many major endurance racing series, including the World Sportscar Championship, Intercontinental Le Mans Cup, ALMS, and now, the WeatherTech SportsCar Championship. This race is the second of four races in the Michelin Endurance Cup.

The track also hosts the Legends of Motorsport and Historic Sportscar Racing series and is the winter home of the Skip Barber Racing School. Many IndyCar, sports prototype, and Grand Touring teams use Sebring for winter testing due to the warm climate.

The track is used numerous times each year by the Sports Car Club of American (SCCA) and the National Auto Sport Association (NASA) for amateur events that draw participants from all over the country.

Each February, the racetrack hosts the Bike Sebring 12/24 Hours, an ultra-distance cycling race organized by the Highlands Pedalers Bicycle Club and the Rotary Club of Highlands County. IndyCar regularly holds tests at the facility to simulate street circuits on its calendar.