After debuting Sunday at Fuji International Speedway in Japan, the Nissan Z GT500 race car will take part in the famous Super GT Series’ 2022 season. Set to replace the iconic NISMO Nissan GT-R which enjoyed the longest run in the Japanese series of any Nissan car—the manufacturer’s new GT500 racer will battle against the Toyota Supra and Honda NSX Type S in the ultra-competitive GT series.

A Nissan GT-R-based racing car replaced the Z33 back in 2008, and the Z series now returns for competition 14 years later. The matte-black wide-body sportscar first appeared at a special unveiling event at Japan’s Fuji International Speedway in which it’s seen doing display runs on the track. While no exact specs were announced, the competition class calls for a 2.0-liter turbocharged inline-4 engine with a cap of 650 horsepower.

“The Nissan Z GT500 symbolizes Nissan’s spirit of taking on challenges and bringing excitement to life. Through our racing efforts, we continue to innovate our cars and we race to win with the same daring we have displayed so many times over the years,” said Nissan COO Ashwani Gupta.

The new Z looks absolutely awesome in Super GT guise, keeping its retro looks intact, but with the addition of some GT500 fender flares, intricate side skirts, a massive swan-neck rear wing, a complex diffuser, a larger front grille with an interesting center post and a bunch of new vents. There are no photos of the interior but expect a stripped-out cabin with racing seats, a roll cage, and a ton of buttons and switches.

Nissan didn’t release any technical details yet, but the GT500 class is heavily regulated. All the race cars use turbocharged inline-4 engines, and the turbos themselves are identical across the board. Power output is 650 horsepower, and weight is set at a minimum of 2,271 pounds including the driver. The new Z will go up against the Acura NSX and the Toyota Supra in the GT500 class, while the slower and less restrictive GT300 class has entrants that include the Lotus Evora, Toyota Prius, Subaru BRZ, and lots of other GT3-class racers.

While this is the first race car we’ve seen based on the new Z, we’re certain it won’t be the last. Nissan has a long history of racing past Z cars in everything from global rallying to the IMSA series, so we expect to see the new Z in various other motorsport series in the near future. But for now, the Z GT500 will make its on-track debut at Okayama International Circuit for the start of the 2022 season in April.

The production version of the Nissan Z will arrive in dealerships next spring as a 2023 model, with a standard 3.0-liter twin-turbocharged V-6 capable of 400 hp. While the GT-R Nismo has been ousted from the GT500, it’s still slated to compete in the GT300 class. 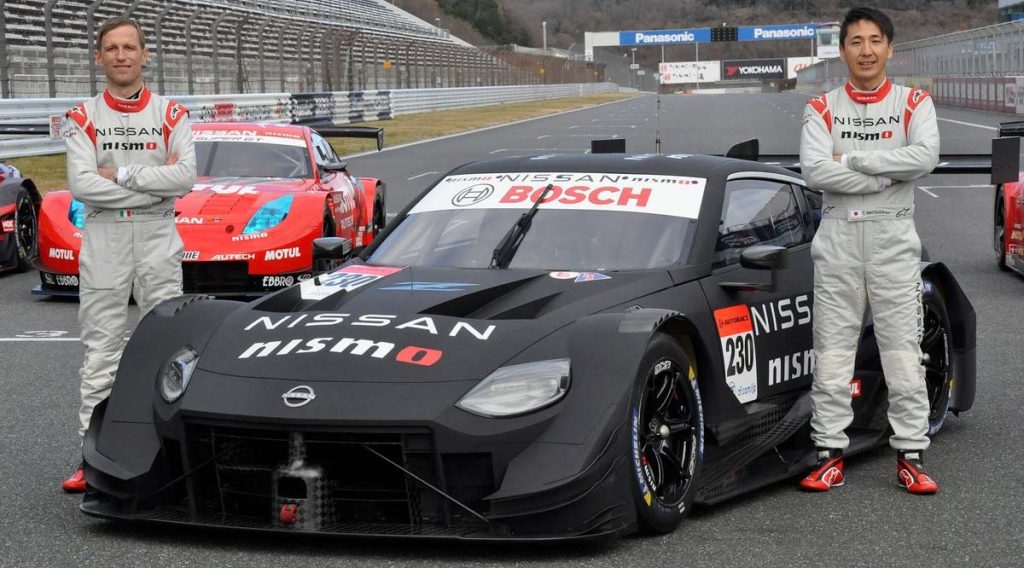