In the cockpit of Porsche’s first all-electric car was Portugal’s Bruno Correia, the FIA safety car driver. With the tour through the streets of the capital, the extraordinary cars whet the appetite of residents and visitors for the upcoming Formula E event: on Saturday and Sunday, races 7 and 8 of the ABB FIA Formula E World Championship will be contested on the apron of the historic Tempelhof Airport.

With the Taycan Turbo S as the safety car, Porsche is not only committed to Formula E-safety. The distinctive design, which also attracts attention and curious glances on Berlin’s streets, flies the colors of all eleven teams and symbolizes the commitment of everyone involved in Formula E and the joint commitment to the future of all-electric motor racing as well as social values such as diversity and community.

The Taycan Turbo S fits as perfectly in Berlin as it does in Formula E. Germany’s capital showcases itself as a metropolitan city at the forefront of electromobility and the innovative all-electric racing series lives up to this claim by using 100 percent renewable energy for its doubleheader event at the Tempelhof Airport. Berlin is also the only city where the world’s first all-electric racing series has been a regular fixture on the calendar every season. The organizers are repaying this hospitality with a number of activities: 200 students of electromobility from all over Germany have been invited to experience innovative future solutions first-hand, using Formula E as a paragon. Social engagement is not neglected either, with Formula E gifting 3,500 tickets to Berlin residents, associations, and schools for entry into the Allianz E Village each day. Furthermore, the organizers are distributing 150 surprise gifts to patients in the Charité Campus Virchow clinic. 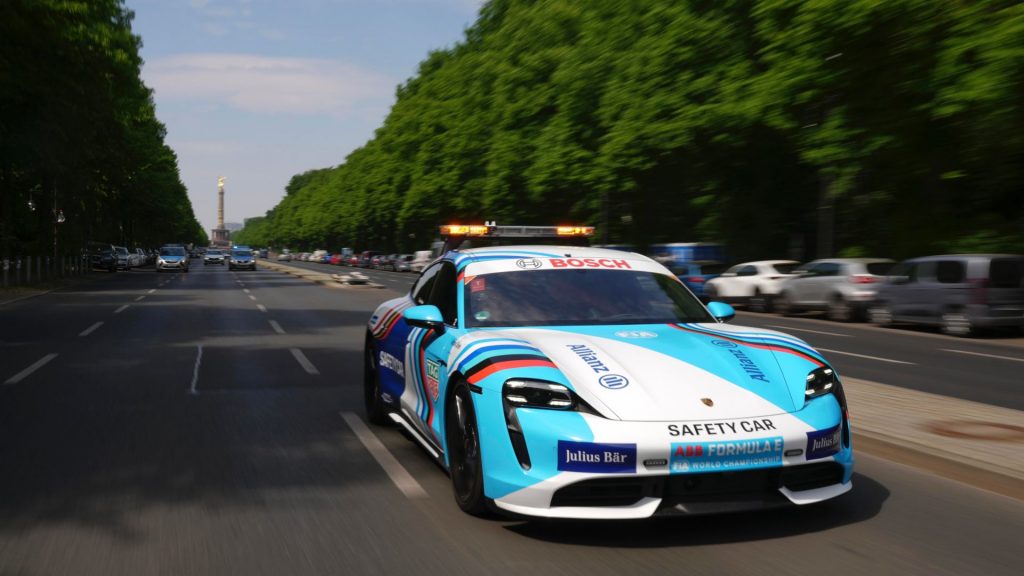 Thanks to its driveability and safety as well as an output of up to 616 hp the Porsche Taycan Turbo S is the ideal choice as a Formula E safety car. With launch control, the flagship model of the Taycan range accelerates from 0 to 60 mph in a very brisk 2.6 seconds…