It’s a good time to be a Toyota fan. The GR86 was just brilliantly overhauled, a new and very hot all-wheel-drive GR Corolla is on the horizon and the 2023 Toyota GR Supra is countering the new-for-2023 Nissan Z with a new manual transmission option of its own. If you’d asked enthusiasts a decade ago which brand would spearhead a Japanese sports car renaissance while staring the end of internal combustion in the face, not many would have guessed Toyota. Yet here we are.

The Supra is still a Toyota with an asterisk, however. Its chassis, engines, and transmissions are all sourced from BMW, for better or for worse. Fortunately, it’s most often the former. We have a few quibbles. The lack of a manual on the 2.0-liter 4-cylinder, for example, but hey, at least you can now get one for the 3.0-liter inline-six. By and large, the Supra is a powerful, agile, communicative driving partner that never fails to turn heads. 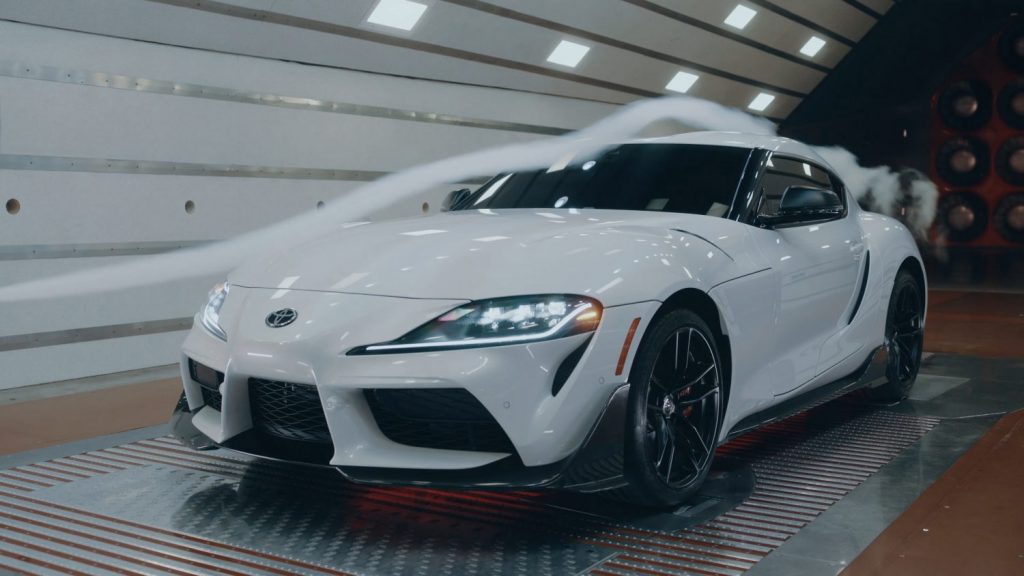 What’s New in Review for 2023?
Three-pedal fans rejoice! The GR Supra 3.0 model is officially available with manual transmission for the 2023 model year. Regardless of transmission, all six-cylinder Supras get retuned suspension and steering, the former of which is supposed to make the car more comfortable. Traction and stability control systems have also been returned, and a new Hairpin+ drive mode introduced for better cornering on tight mountain roads. The four-cylinder Supra 2.0 gets some suspension and braking system tweaks carried over from the revised 3.0, but otherwise carries over. There’s also a new Stratosphere Blue color and the A91-MT Edition, pictured in the interior photos below, that gets unique forged 19-inch wheels in Frozen Gunmetal Gray, red accents throughout, a 12-speaker JBL sound system, and exclusive Cognac leather. 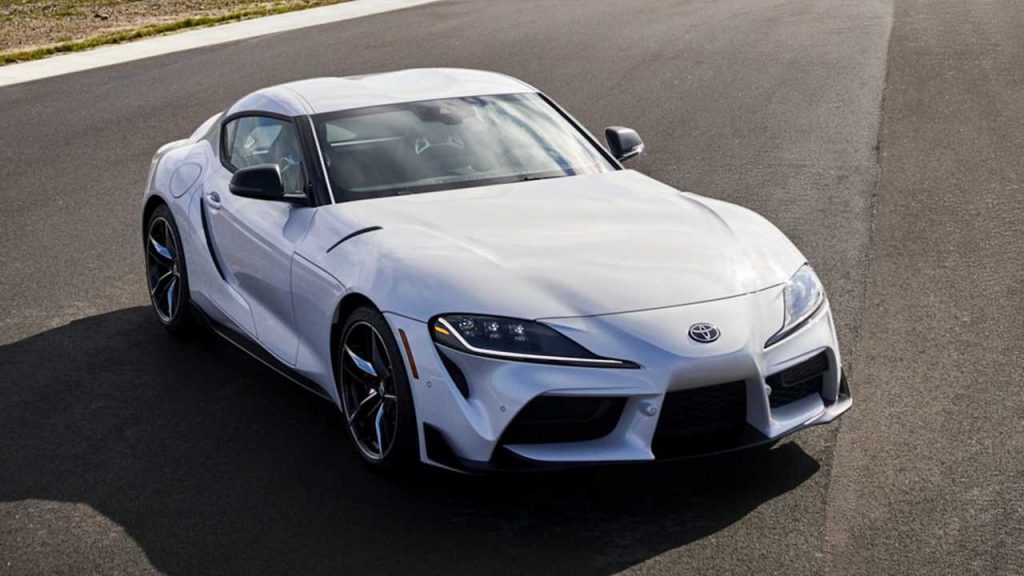 Interior and Tech Upgrades
Toyota was basically handed a box of BMW buttons, knobs, and screens, and then used it all to create a cabin that’s indeed stylistically different from its BMW Z4 platform-mate. The materials quality is not quite up to a BMW standard, but the Supra also costs considerably less and is still to an acceptable standard for its price point. To that point, the cabin is also of a higher quality than that of the cheaper Nissan Z.

Although the instrument panel screen features Supra-specific graphics and is surrounded by a unique frame integrated with fuel and temperature gauges, what you see on the standard 8.8-inch infotainment display is pure BMW. The center console knob controller and surrounding menu buttons are identical to the last-generation iDrive units you’d find in cheaper BMW models or pricier ones from a few years ago. It generally works OK, but we had the same sort of Bluetooth and Apple CarPlay connectivity issues as we’ve previously had with BMWs, and it’s not the easiest system to use. Some would argue a Toyota system would be better. 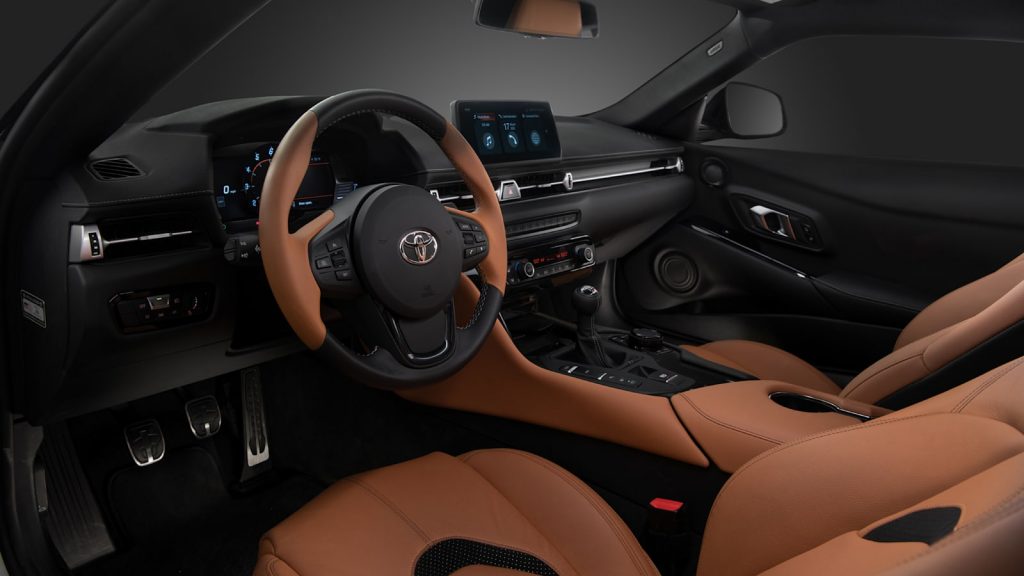 Size Matters
The Supra is quite small. Its wheelbase (97.2 inches) and length (172.5) are virtually identical to the new Nissan Z’s. Like that car and unlike past Supras, it seats only two, albeit with sufficient space for someone taller than 6 feet. Its narrow cargo area can handle weekend getaway luggage (we somehow managed to stuff four bags inside). We’ve yet to test out the new Z’s cargo area, but we expect the Supra to have a slight edge given the Z’s carry-over platform and previous cargo volume of just 6.9 cubic feet. Neither is nearly as capacious as a Mustang trunk, nor the dual trunks of a Corvette.

One space-related element to consider is the seats. They’re the same in the 2.0 and 3.0, but only the latter has eight-way power seats, which means you may only be comfortable in the pricier model. The seats also can’t be heated in the base model.

Economy at Speed
The base Supra 2.0 packs a 2.0-liter turbocharged inline-four by BMW that’s good for 255 horsepower and 295 pound-feet of torque. Like every Supra, it comes only with rear-wheel drive. Toyota says it’ll go from 0- 60 mph in 5 seconds, which is mighty quick, and basically the same as the base Porsche 718 Cayman. The BMW Z4, which has the same engine is just a hair slower. Fuel economy figures hadn’t been released at the time of this writing for 2023, but it seems safe to assume it would be virtually the same as the ’22 Supra that returned 25 mpg city, 32 mpg highway, and 28 mpg combined.

The Supra’s 3.0-liter turbocharged inline-six remains the upgrade engine and it’s the only one available with another exciting upgrade: a six-speed manual transmission. It produces 382 hp and 368 lb-ft of torque and can take the Supra from 0-60 in 3.9 seconds with the eight-speed auto. It feels every bit as quick as that sounds behind the wheel while literally sounding sensational doing it. Fuel economy for the automatic in 2022 was 22/30/25, and they should remain consistent with that. Those for the manual will almost certainly be lower.

Wheel Time
You can feel the Supra’s size (or lack thereof) from the driver’s seat. The beltline is high, the greenhouse short and the clamshell hood stretches out before you, but it doesn’t overwhelm as similar long-hood/short-deck cars as a Mercedes-AMG GT can. It’s also balanced, with a 50:50 weight distribution that’s pretty much written into anything with Bavarian DNA, and possesses an eagerness to turn in smartly and rotate around you. Through longer arcing turns, you can feel what the car is doing through the seat of your pants and can steer with the responsive throttle. Along those lines, you can wag its tail and slide a bit when in Sport mode and with the traction control off. Shut stability control off and it’s possible to easily coerce and then hold a full-blown smoky slide. The steering, meanwhile, is excellent and actually a much more responsive, communicative effort than BMW achieves with theoretically the same componentry.

Not surprisingly, things are dialed down with the four-cylinder. It’s still quick, but obviously quite a bit slower. Its exhaust still sounds cool (unlike BMW, Toyota does not employ fake engine noise through the speakers), but it’s also not the same as the inline-six. And without the 3.0’s limited-slip differential and adaptive suspension, the four-cylinder Supra just doesn’t handle as well, even though there’s less weight atop the nose and elsewhere. It also has less powerful brakes, and, without the adaptive suspension, doesn’t ride as comfortably as the Supra 3.0.

As such, the more powerful Supra is most definitely the better one to drive, and being paired with an inline-six just feels right in this car. We’ve yet to drive the manual-transmission Supra, but its availability is just more icing on the 3.0-liter cake. However, for the money, and relative to its minimal competition, the four-cylinder model is still a compelling performance machine.