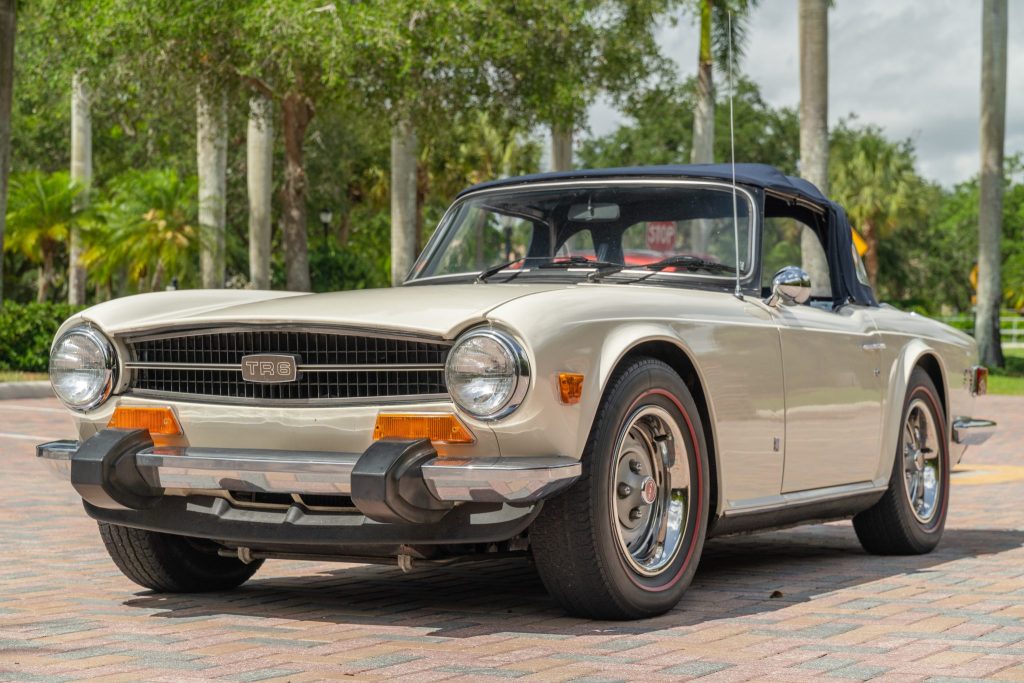 This 1974 Triumph TR6 was built in August 1974 and is finished in white over Shadow Blue vinyl upholstery. The car is powered by a 2.5-liter inline-six paired with a four-speed manual transmission, and additional equipment includes a blue convertible top, a luggage rack, 15″ steel wheels, a wood dashboard, electronic ignition, and dual carburetors.

The History
Built by British Triumph Motor Company between 1969 and 1976. The TR6 was introduced in January 1969 and produced until July 1976. The first series has commission numbers commencing with CP or CC. CP designating petrol injection and CC designating carburetors for the US market. The first bodies were built at Liverpool, in September 1968, and by December 1968 1,468 USA spec TR6s had been assembled at Canley, along with 51 export-market TR6PIs, home UK market assembly did not begin until the first few days of January 1969. The PI model has a brake horsepower of 150, whereas, for the US model, it is 104 bhp. The TR6 was the best-seller of the TR range when production ended, a record subsequently surpassed by the TR7. Of the 91,850 TR6s produced, 83,480 were exported; only 8,370 were sold in the UK.

The frame, engine, running gear, body tub, and doors were similar to the Michelotti-styled TR5 (TR250 in the US). The front and rear of the car were restyled by Karmann of Germany, though one source claims the new squared-off Kamm tail design was from an unrelated Michelotti prototype. A new removable hardtop was designed in-house. 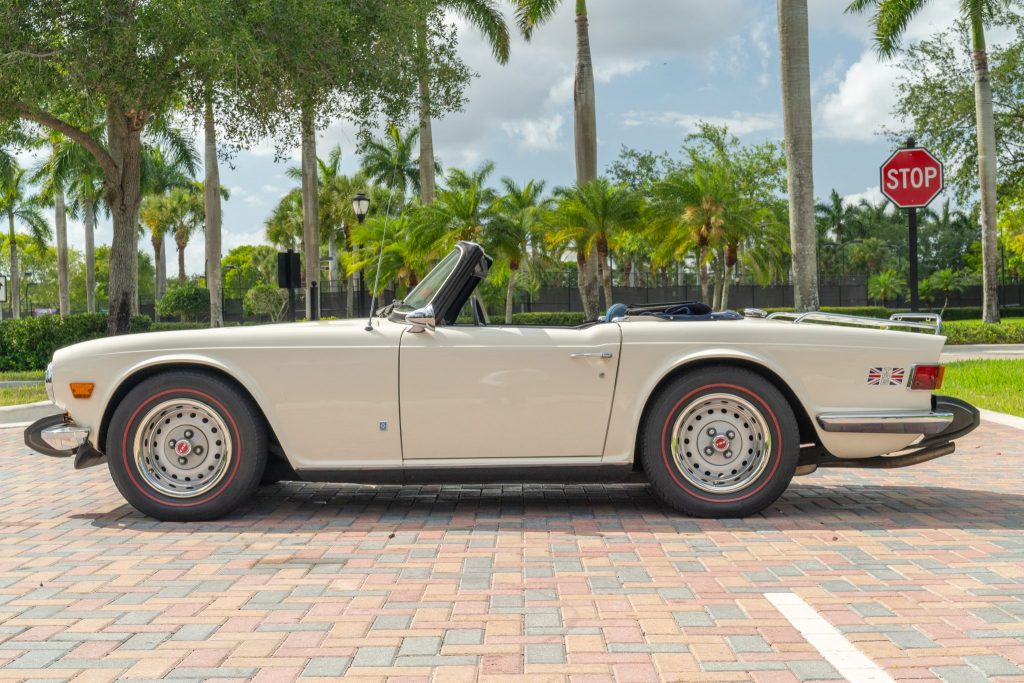 Unofficial Mark 1 and Mark 2 Variants
It is important to note that the limited run of early 1969 cars is slightly different from the 1970-onwards car. The 1969 model run (unofficially an MKI) saw only 704 Right Hand Drive cars. These TR6s produced for the Home Market can be readily identified by having steel wheels with Rostyle “tin-plate” wheel trim covers, a body-colored windscreen surround, a body-colored short trim bead located from the top of the boot deck towards the end of the doors, a steering wheel with dished black spokes and non-reclining horseshoe-shaped seats, two-piece side indicator lenses and tiger-striped radiator hoses. The early 1969/MKI Right Hand Drive (G plate) cars are now extremely rare and potentially only a handful exist in original form; they have become a very desirable car and the most collectible.

Regarding the US models, a total of 7,981 Left Hand Drive cars were produced in 1969 and all had high-backed seats, wire wheels with red marked tires, and are all LHD. A number of modifications were introduced for the 1970 model (MKII) including a matt black windscreen surround, painted steel wheels with a chrome surround and black center trim, reclining seats, and a non-dished grey spoked steering wheel. 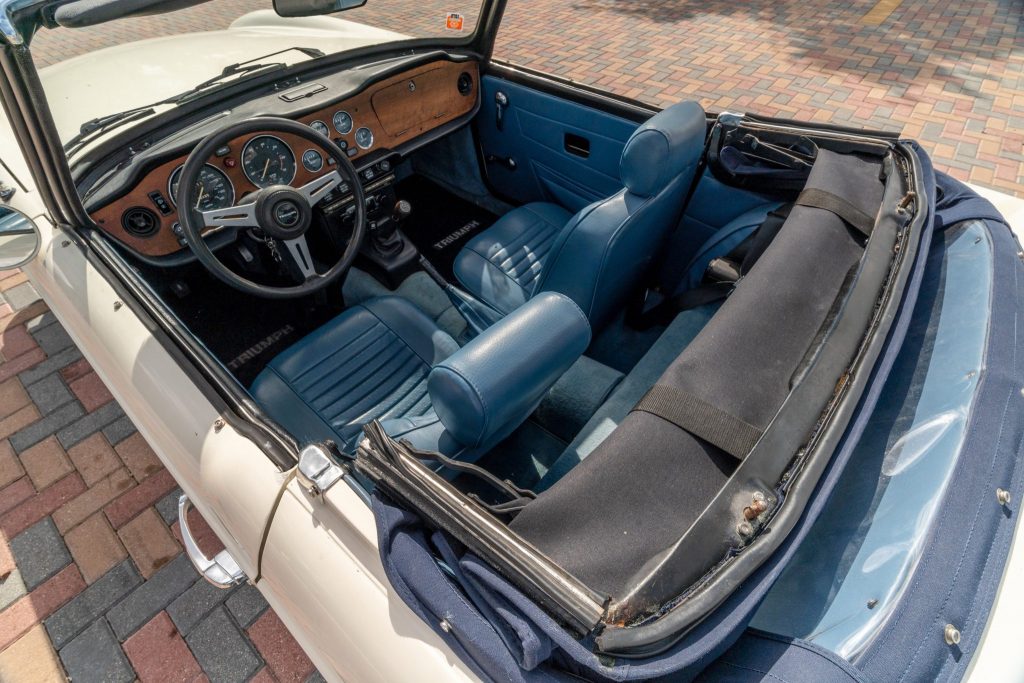 Features and Performance
All TR6s were powered by Triumph’s 2.5-liter straight-6, with the same Lucas mechanical fuel injection as the TR5 for the United Kingdom and global markets, and carburetted for the United States, as had been the US-only TR250. The TR6PI (petrol-injection) system helped the home-market TR6 produce 150 bhp (110 kW) (152 hp DIN) and 164 lb-ft of torque at model introduction. US market cars, with carburetors and a lower compression ratio, only produced 104 net bhp and a peak torque of 143 lb-ft at 3500 RPM. 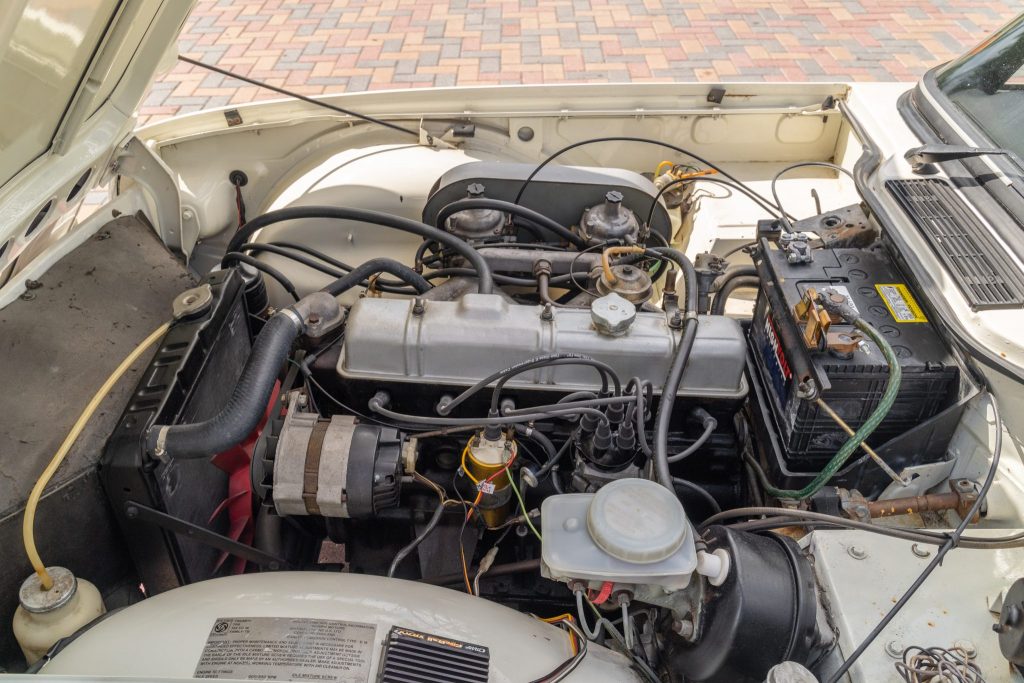 The TR6 featured a four-speed manual transmission. An optional electrically switched overdrive operated on second, third, and fourth gears on early models and third and fourth on later ones. Construction was a traditional frame. Other features included semi-trailing arm independent rear suspension, rack and pinion steering, 15-inch (380 mm) wheels, and Michelin asymmetric XAS tires which dramatically improved the handling, pile carpet on floors and trunk/boot, bucket seats, and full instrumentation. Brakes were discs at the front and drums at the rear. A factory steel hardtop was optional, requiring two people to deploy. The dashboard was walnut veneer. Other factory options included a rear anti-roll bar and a limited-slip differential. 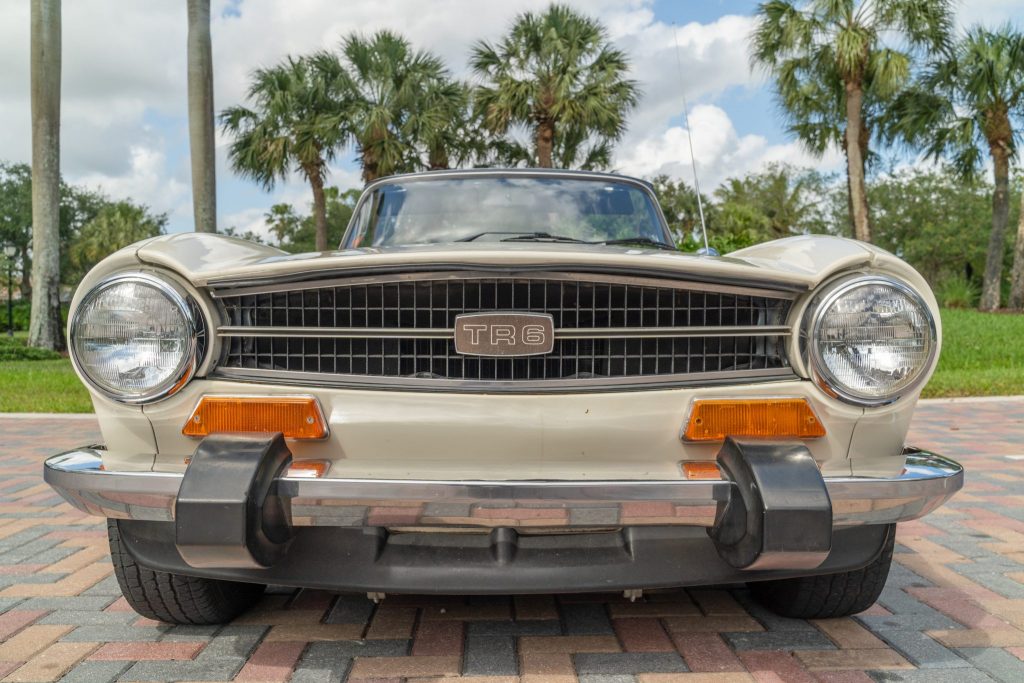