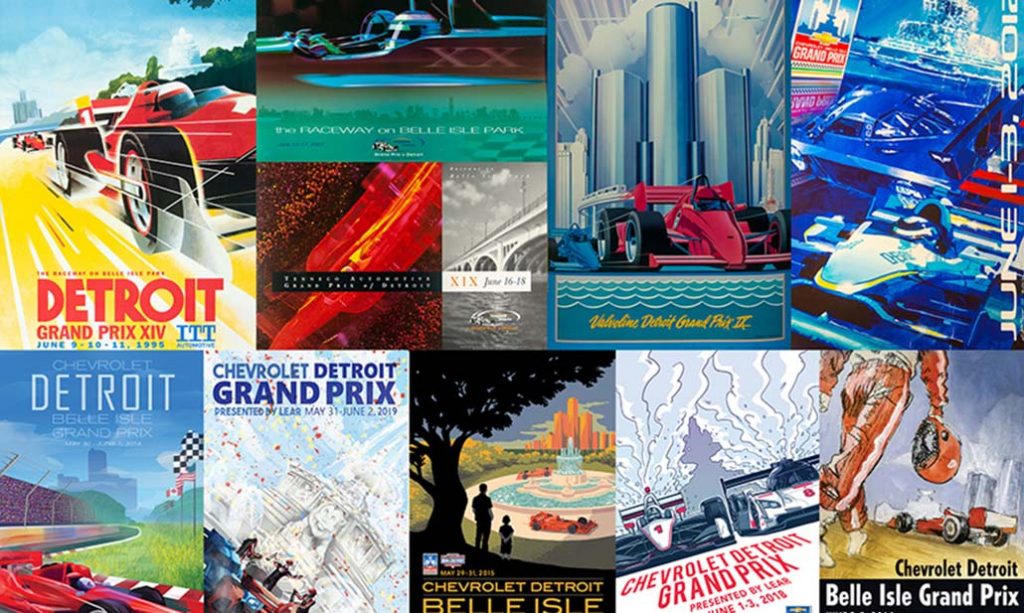 The first Detroit Grand Prix was in 1982 and it started as a Formula One race through the streets of downtown Detroit before becoming a CART-sanctioned race in 1989. The race moved to Belle Isle in 1992 continuing under the CART/Champ Car banner until 2001. After the success of the Super Bowl in Detroit in 2006, Roger Penske and the Downtown Detroit Partnership (DDP) teamed up to bring an annual national sporting event to the city of Detroit and spearheaded the return of the Grand Prix in 2007 on Belle Isle. After challenging economic times delayed the event after the 2008 season, the Grand Prix returned in 2012 with Chevrolet as the title sponsor of the event and the current promotional group as a subsidiary of the DDP. The 2019 event marked the 30th Grand Prix in Detroit’s history. The event was not held in 2020 due to the COVID-19 pandemic but returned in 2021 with limited attendance due to health and safety protocols in place for the event. 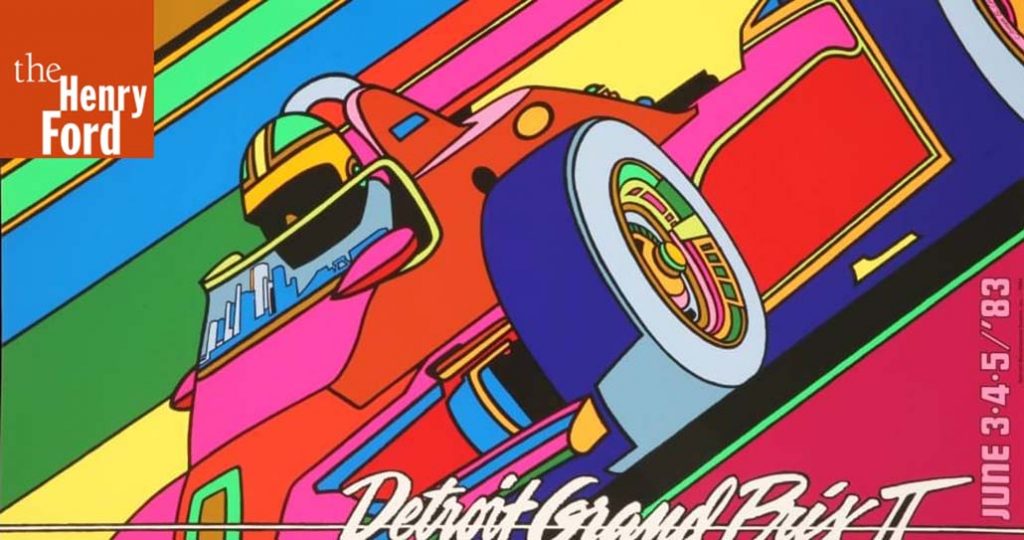 Renaissance Center: 1989 to 1991
In 1989, the race in Detroit was replaced by a CART series event. Instead of moving to Belle Isle, CART utilized a slightly modified version of the existing downtown Renaissance Center street circuit. The chicane on the main straight was eliminated – something the F1 drivers had been calling for since the first race in 1982. The CART race was held on this 2.52-mile (4.06 km) layout for three years. As had been the case in the event’s Formula One days, competitors and fans continued to pan the course, criticizing it for its bumpiness, poor visibility, and overall poor layout.

The 1991 event was perhaps the last straw in what was an embarrassment for the organizers. In addition to a disintegrating track made worse by suffocating heat and humidity, it saw Mario Andretti crash his Lola head-on into a tow truck. The safety crew was attempting to remove Dennis Vitolo’s stalled car from a blind corner at St. Antoine and East Jefferson Streets. Seconds later Michael Andretti came onto the scene and crashed into Vitolo’s car attempting to avoid his father’s wrecked car. Ultimately, promoters considered the downtown circuit a money-loser and claimed it was suffering from poor television ratings with its Father’s Day date (up against the U.S. Open) 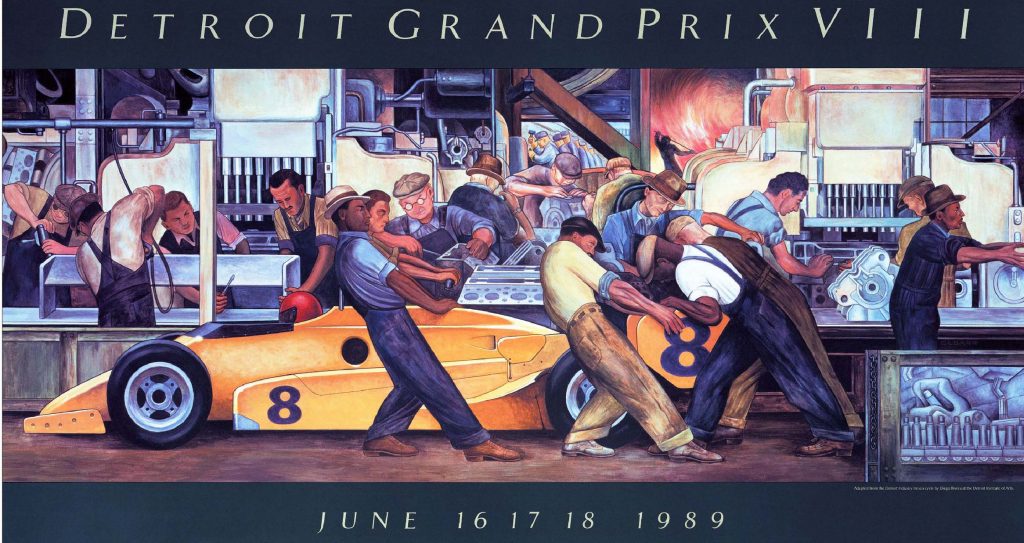 Belle Isle: 1992 to 1997
Beginning in 1992, the race was moved to a new temporary course set up on Belle Isle. The move revived a conceptual plan for the Formula One event from four years earlier. One major difference that made Belle Isle viable for CART – and acceptable to locals – was that permanent Formula One style garages and pits were not required by the sanctioning body. The race was also moved up a week, and 1992, was the first race after the Indianapolis 500 (displacing the traditional Milwaukee). The first layout measured 2.1 miles (3.4 km). Almost immediately, the new course was criticized by drivers for being narrow, slow, and lacking passing zones. It was complemented, however, for its smoothness – a sharp contrast to the rough, manhole-dotted downtown circuit. Fans’ opinions were mixed, as sightlines were improved over the downtown circuit, but access to the island was difficult, and the racing was not much better.

Course Modification: 1998 to 2000
In 1998, the course layout was modified to eliminate the slow “Picnic Way” segment and series of corners. Instead, the course continued straight along Central Avenue to create a long, fairly-wide straightaway leading into a competitive passing zone. The track then measured 2.346 miles (3.776 km). Competitors praised the revised layout as being an improvement over the original (1992–1997) course. However, pavement transitions from asphalt to concrete were being blamed for an increase in incidents due to slickness.

The 2000 event saw young Brazilian Hélio Castroneves score his first Champ Car victory for Marlboro Team Penske. After his victory lap, he stopped on the front stretch and climbed the catch fencing in an apparent effort to share his joy with the spectators. Helio became known as “Spider-Man” because of this celebration, which has been repeated in his later victories.

Support races for the Detroit Grand Prix included the Motor City 100 for the SCCA Trans-Am Series and the Neon Challenge celebrity race. Scenes from the film Driven were filmed during the race weekend in 2000.

The event, along with the Michigan 500, provided two CART races in southern Michigan annually.

Demise: 2001
Even though the track was a temporary street course, it became known as The Raceway on Belle Isle. As the years went by, the track was increasingly criticized for its narrowness, poor access, and its overall uncompetitive nature. The once smooth surface was aging in the harsh Detroit winters, and along with it came bumps, cracks, and potholes. The circuit gained a reputation of being the “worst” and “least popular” venue on the entire schedule. In 1997, it was noted that race winner Greg Moore started seventh and did not pass a single car competitively out on the track for position all day. Participants also disliked the facility because of its lack of paved areas for support activities. Paddock areas were often muddy and unable to accommodate the teams.

After the 2001 race, CART’s contract with Belle Isle expired. Attendance had been noticeably slipping. Negotiations to continue the event went over the summer but eventually stalled. Organizers briefly entertained the idea to return to the old downtown circuit, but those plans were quickly scuttled. The series chose to drop the race from the schedule and the event went on hiatus. 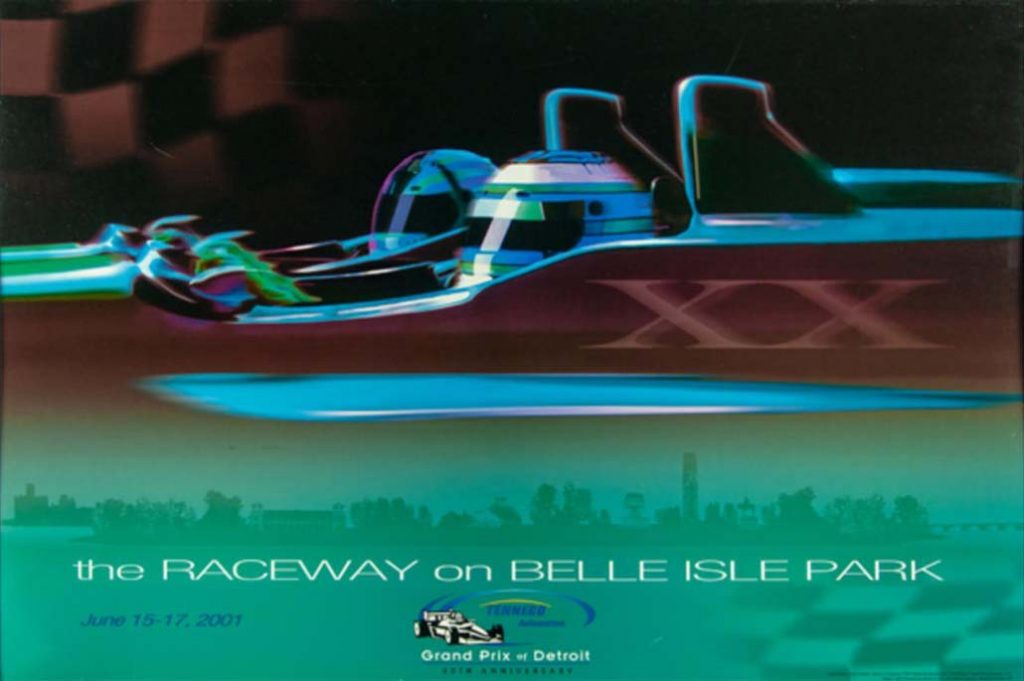 IndyCar Series: 2007 to 2008
In 2006, Roger Penske spearheaded talks to revive the race for 2007 as part of the ALMS and IndyCar Series schedules. Penske had recently experienced tremendous success as head of the Super Bowl XL Detroit Metro Host Committee. On September 29, 2006, it was announced that the Detroit Indy Grand Prix would return as the tenth race of the ALMS’s 12-race season and penultimate race of the IndyCar Series’ seventeen-race schedule.

To improve access to the track, a park-and-ride system, similar to what was used at Super Bowl XL, was implemented. Further paddock and track work was completed before the race. The 2007 event attracted a strong crowd and was considered a success. It was held again in 2008. During this period, the event utilized the original (1992–1997) course layout, with some minor improvements. Some of the barriers were moved back, particularly inside the apexes of some of the turns, to effectively widen some curves and improve sight lines. Some barriers, including the metal guardrail on the pit straight, had been entirely removed.

On December 18, 2008, the scheduled race for 2009 was canceled. The ongoing automotive economic crisis and its impact on the Detroit area was the primary reason. Roger Penske did not rule out a return in the future. 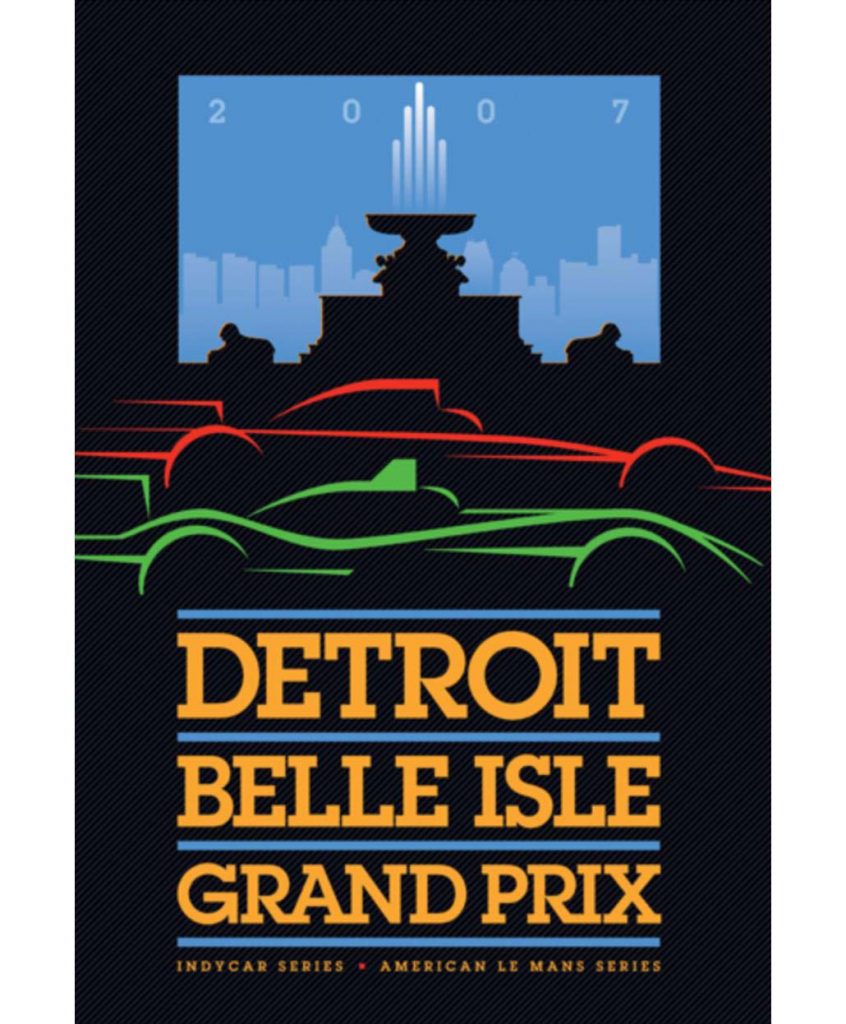 Doubleheader Era
For the 2012 season, the race on Belle Isle was revived for the second time. The event was situated on the weekend immediately after the Indianapolis 500. Starting in 2013, the race was hosted as a unique “doubleheader” weekend. The race weekend would consist of two separate, points-paying races, one each on Saturday and Sunday. The races were treated as separate events, with separate qualifying, and full championship points and the results of the first had no bearing on the lineup for the second (as had been the case with some previous “twin” race formats). Beginning in 2013, the race also returned to the more popular and more competitive “long” course (1998–2001 layout).

On April 6, 2020, IndyCar announced the cancellation of the 2020 edition due to the COVID-19 pandemic. As part of race cancellations and postponements due to the pandemic, Detroit was scheduled to be the opening event. Organizers stated that Michigan’s stay-at-home order (which has since been extended through April 30) would hinder the necessary preparations to hold the race and that the race cannot be reasonably rescheduled due to other events having been booked on Belle Isle already. The race returned in its traditional double header format for 2021. On September 19, 2021, IndyCar announced that the Detroit Grand Prix would be altered from a two-race weekend to a single race weekend as part of their 2022 schedule. 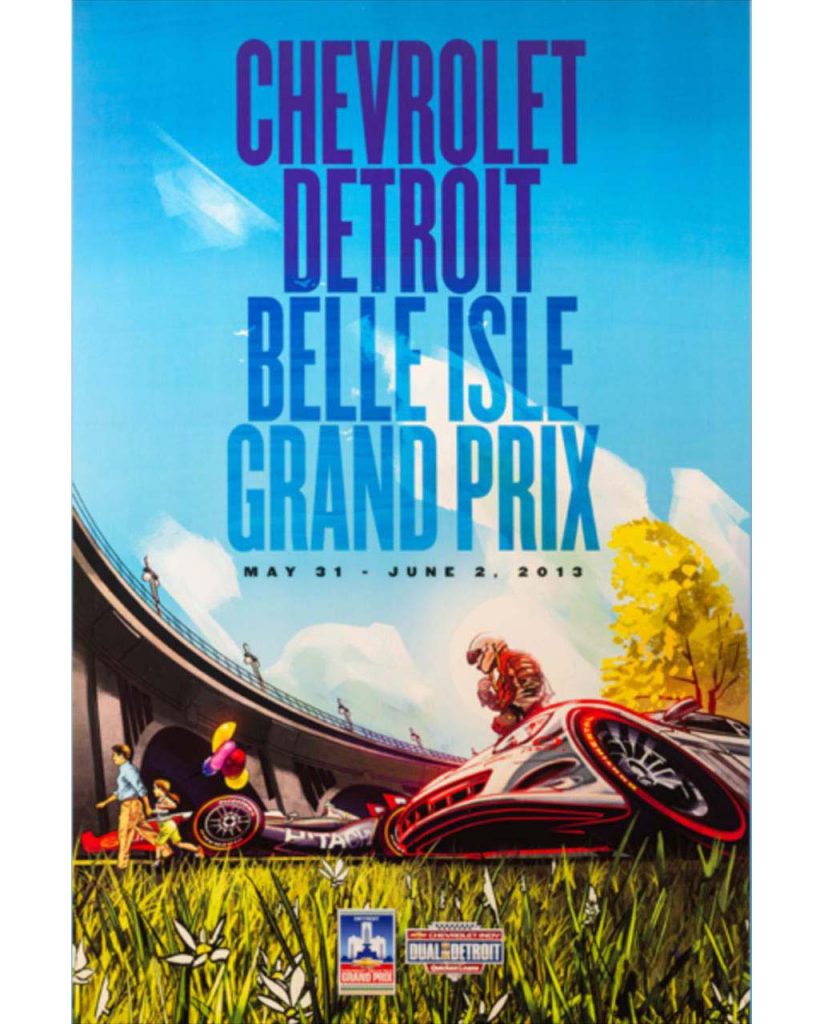 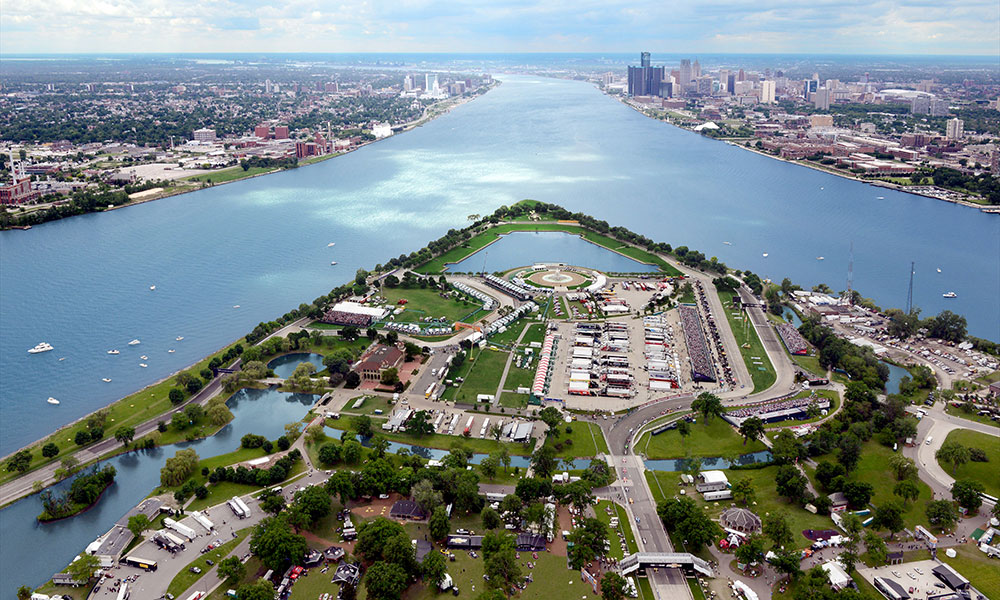 In the IMSA WeatherTech SportsCar Championship, the No. 01 Cadillac for Chip Ganassi Racing took home the win in the Prototype class of the Chevrolet Sports Car Classic. Teammates Renger van der Zande and Kevin Magnussen helped produce a Saturday sweep for the Ganassi team, combined with Ericsson’s INDYCAR win. The victory also marked the team’s first triumph in the IMSA Prototype class this season, the first series win for Magnussen, and the 15th IMSA victory for van der Zande. In the GTD class, the No. 23 Heart of Racing team scored its first win and the first IMSA victory for drivers Ross Gunn and Roman de Angelis. Corvette Racing made its first appearance on Belle Isle in 2008 as the team based in metro Detroit competed with both C8.R GTLM entries. The No. 4 Corvette of Nick Tandy and Tommy Milner beat out the No. 3 Corvette driven by Jordan Taylor and Antonio Garcia in the exhibition event. 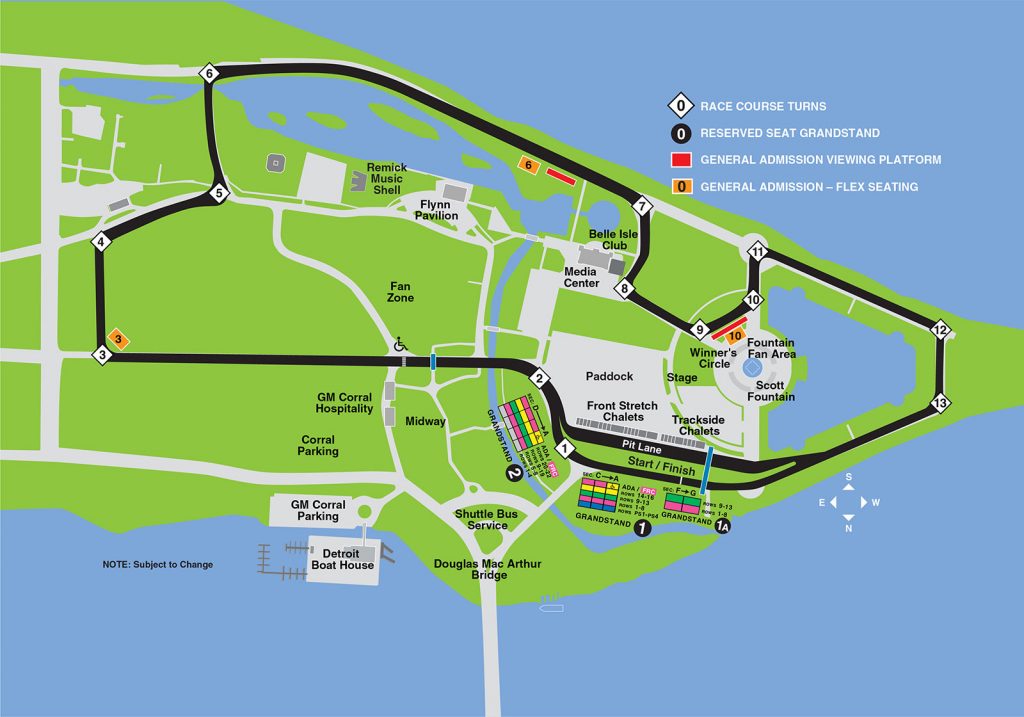 Indy Lights returned to Belle Isle for the first time since 2012 for a doubleheader weekend in the Motor City. Andretti Autosport driver Kyle Kirkwood swept the weekend, leading 54 of 55 laps in the two races as he rose to third place in the championship standings after a Detroit double play. 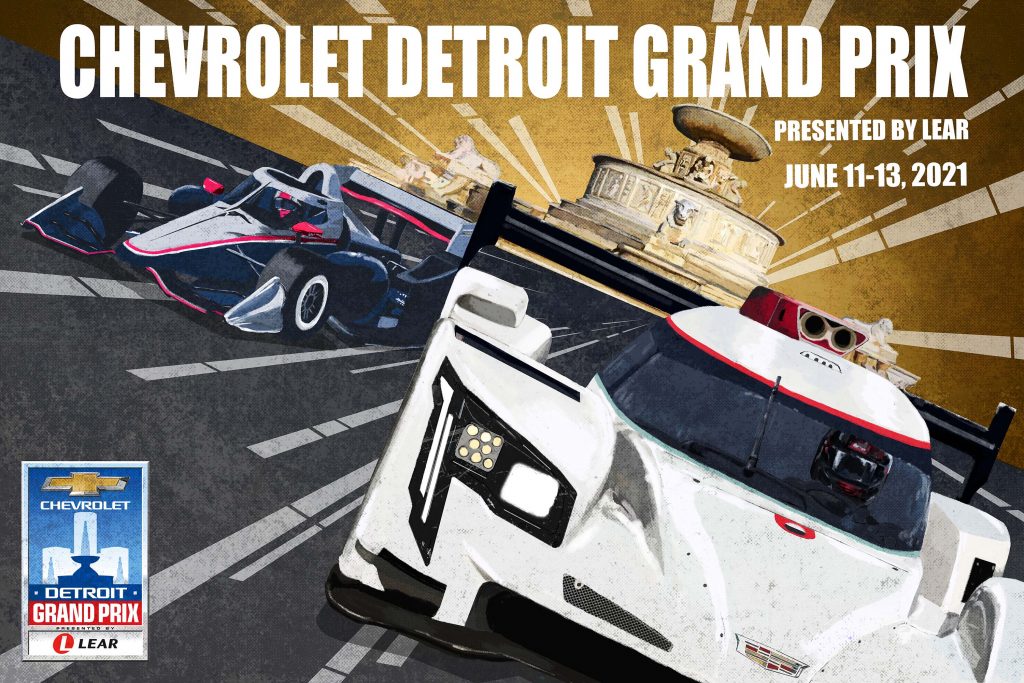 Downtown Revival: 2023
Mere weeks after the 2022 IndyCar schedule was announced Penske Entertainment Group revealed that moving the Detroit Grand Prix to a single race weekend was done as part of a proposal discussed with the city of Detroit to return the race back to the Renaissance Center utilizing a new downtown circuit beginning in 2023. Penske Entertainment wanted the race to return to the Renaissance Center based on fan criticisms of the raceway at Belle Isle, namely that it was difficult to access on race weekend, that there was not any room to expand seating on the island, and that residents of Detroit did not appreciate the section of the park that the circuit is built on being shut down for the length of time it took to construct and tear down the circuit. On November 3, 2021, the City Council of Detroit unanimously approved Penske Entertainment’s plan and announced an initial three-year contract to return the Detroit Grand Prix back to the downtown streets for a single race weekend beginning in 2023.

The new downtown circuit is based on lessons learned from the Nashville Street Circuit. It is designed to be less disruptive to city traffic while also being more accessible to spectators and having more points of visibility for the racing than the old Detroit Street Circuit. The new circuit will feature ten corners and is 1.7 miles in length compared to the 2.5-mile circuit used by Formula One and CART and the 2.35-mile Raceway On Belle Isle. It will travel from the start/finish line on Atwater Street and head onto Schwarzer Street, Franklin Street, and Rivard Street in the first series of corners. From Rivard Street drivers will make a sharp left turn onto the circuit’s most prominent feature, a 0.7 mile straightaway down East Jefferson Avenue. This straightaway will be the longest straightaway on an IndyCar street circuit, eclipsing the dual straights on the Korean War Veterans Memorial Bridge in Nashville. The circuit will then turn onto Bates Street before heading back onto Atwater Street. The only part of the old Detroit Street Circuit used on the new circuit will be the old circuit’s sixteenth and seventeenth corners which were then known as The Ford Corner. On the new circuit, this section will be the eighth and ninth corners. Neither of the tunnels or the side streets used on the old Detroit Street Circuit will be used on the new circuit to minimize the impact on local businesses and city traffic around downtown Detroit. To increase spectator viewership IndyCar and Penske Entertainment will offer free viewership at multiple points along the circuit. The Detroit City Council stated the entire circuit will be fully resurfaced before the race. Construction and tear down of the circuit will take place at 8:00 PM and 5:00 AM over the course of twenty days respectively, minimizing disruptions to city traffic around the Renaissance Center.