McLaren makes some of the wildest performance envelope-pushing supercars on the market. However, the automaker is changing with the times, and with it, a new generation of supercars. Those changes include ditching the screaming V8s of yesteryear for newer, more efficient hybrid drivetrains. Enter the formidable-looking hybrid V6 McLaren Artura.

The hybrid V6 Artura is a new McLaren supercar focusing on the future of performance, namely electrification and hybridization. The car looks very similar to the dramatically sculpted McLaren lineup we’ve grown accustomed to, like the 720S and 675LT. However, the new McLaren is a bit different from its predecessors. According to Top Gear, it has traded in the automaker’s beloved 4.0L V8 in exchange for a 3.0L V6. Before you get bent out of shape, it doesn’t sacrifice much in the swap.

Is the McLaren Artura a hybrid?

The new McLaren Artura packs a hybrid turbocharged 3.0L V6 engine with a 94-horsepower electric motor to add grunt and efficiency. In addition to using the electric boost to perform, the 3,400 lbs supercar can drive on electric-only power. According to Car and Driver’s testing, the Artura can travel up to 11 miles on electric-only power. While that doesn’t seem like much, it’s only 4.5 miles shy of the Ferrari SF90’s electric range, at nearly a third the price.

How much horsepower does the new hybrid V6 McLaren make?

The McLaren Artura produces 671 horsepower from the 577 horsepower 3.0L V6 and 94 horsepower electric motor. Also, the power is channeled by way of an eight-speed dual-clutch automatic transmission, with performance that Car and Driver think lacked pantomime. In addition to the horsepower, the Artura produces 531 lb-ft of torque.

However, the new hybrid V6 is no copycat engine with some missing cylinders. McLaren widened the angle to 120 degrees, as opposed to the 90-degree orientation of the old V8s. Additionally, the turbochargers are situated inside the V-angle, not unlike the Alfa-Romeo Giulia Quadrifoglio.

How fast is the McLaren Artura?

The new hybrid V6 McLaren Artura has a top speed of 205 mph, just like the comparable Ferrari 296 GTB. The electric motor is no slouch, either. An Artura can hit 81 mph on electric-drive only, sufficient to drive on a highway. Also, the supercar can dash to sixty in just 2.6 seconds with a quarter-mile pass in just 10.4 seconds.

How much does the McLaren Artura cost?

The new McLaren Artura hybrid supercar will cost around $237,500, according to Car and Driver. While that may seem steep, it’s considerably more affordable than a comparable Ferrari 296 GTB, which will set you back $320,000. Much like the Artura, the Ferrari packs a hybrid V6 engine, although the Ferrari makes an astonishing 819 horsepower.

That steep price tag buys you an understated, contemporary interior that seems to take inspiration from an Apple Watch. According to Top Gear, that interior rides on McLaren’s brand new carbon fiber tub and Pirelli’s new smart Bluetooth-enabled tires. 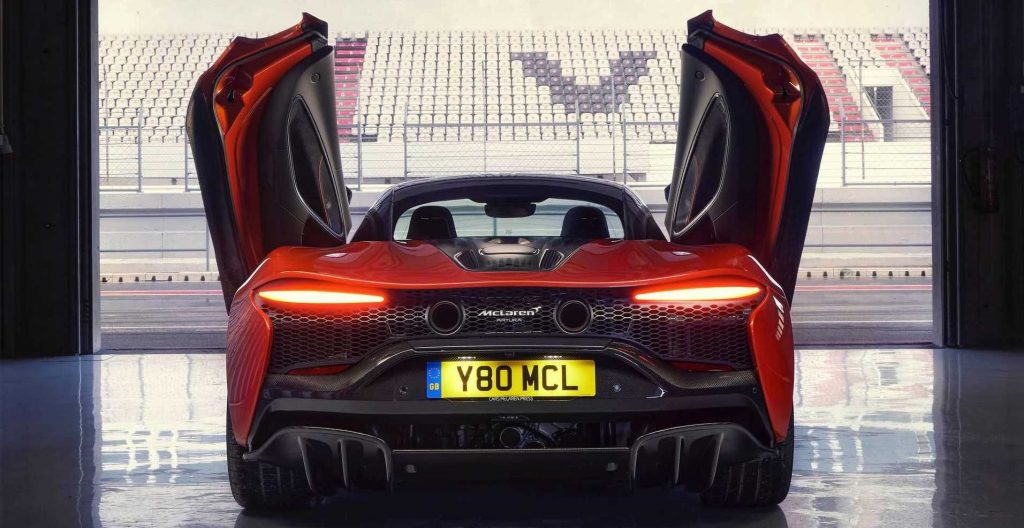