The Japanese manufacturer was never seriously threatened by its two Hypercar rivals, Glickenhaus and Alpine, in a relatively clean race for both of the two GR010 Hybrid crews. The only major drama to hit either Toyota came just shy of the 16-hour mark when Jose Maria Lopez stopped on track in the #7 car and had to perform a full power cycle of the front hybrid system to get going again, losing a lap in the process.

Although the car shared by Lopez, Mike Conway, and Kamui Kobayashi was able to get back onto the lead lap, on pace there was virtually nothing to choose between the two Toyota crews, which had spent the first two-thirds of the race exchanging the lead. The only blip on the way to victory for the #8 car was a slightly slow changeover from Buemi to Hartley in the penultimate hour, with Hartley going on to secure victory by a final margin of 2m01.222s over Lopez in the #7 machine.

It marks a fourth Le Mans win for Swiss driver Buemi, a third for New Zealander Hartley – both of whom are now the most successful drivers at La Sarthe from their respective nations in terms of wins – and a first for new Toyota FIA World Endurance Championship driver Ryo Hirakawa, who becomes the fifth driver from Japan to win the event. 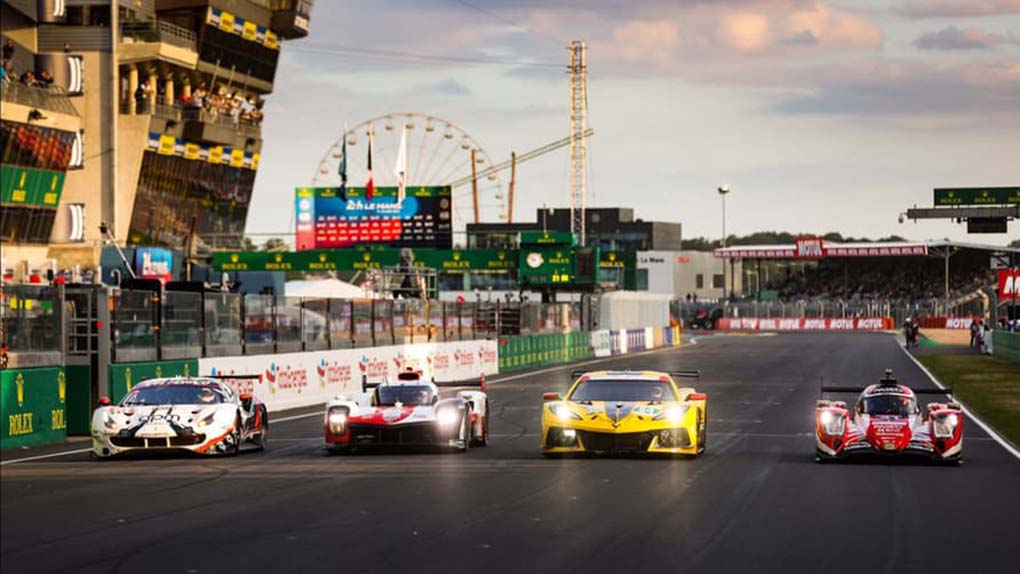 Sims was leading by more than a minute in the #64 C8.R he shares with Nick Tandy and Tommy Milner when he was taken out of the race by the #83 AF Corse LMP2 car driven by Francois Perrodo.

Gentleman racer Perrodo was trying to pass the #47 Algarve Pro Racing car along the Mulsanne straight after the first chicane when he jinked to his left, making contact with Sims and sending the Corvette driver spearing into the barriers at high-speed head-on.

The incident, unfortunately, marked the end of Corvette’s hopes of securing GTE Pro honors in the final outing for the class at the Circuit de la Sarthe.

The Best of the Rest

The quicker of the American manufacturer’s cars early in the race, the #708 car of Olivier Pla, Pipo Derani, and Romain Dumas, had already dropped off the lead lap when a rear suspension problem put Pla into a spin at Tertre Rouge in the eighth hour.

The trio finally recovered to fourth overall, 10 laps off the winning Toyota.

Alpine’s solo grandfathered A480 LMP1 car had a disastrous race beset by technical gremlins that resulted in the entry shared by Nicolas Lapierre, Matthieu Vaxiviere, and Andre Negrao finishing outside of the overall top 20, 18 laps down.

JOTA Sport won the LMP2 class, completing a dominant drive for the mighty No. 38 ORECA 07-Gibson of Antonio Felix da Costa, Roberto Gonzalez, and Will Stevens, who finished fifth overall. The LMP2 overall podium is completed by the No. 9 Prema Orlen Team ORECA of Lorenzo Colombo, Louis Deletraz, and Robert Kubica in second, and the second JOTA car, the No. 28 of Oliver Rasmussen, Ed Jones, and Jonathan Aberdein, in third.

Recovering from a heavy crash on Wednesday that could have ended its race before it ever began, the No. 45 Algarve Pro Racing ORECA of Steven Thomas, James Allen, and René Binder took the LMP2 Pro-Am victory, finishing 15th across all P2s. Second in P2 Pro-Am was the No. 24 Nielsen Racing ORECA (Rodrigo Sales, Matt Bell, Ben Hanley), and third was the No. 3 DKR Engineering Oreca (Laurents Hoerr, Jean Glorieux, Alexandre Cougnaud).

The factory Porsche GT Team won the final battle for GTE Pro, as the No. 91 Porsche 911 RSR-19 of Gianmaria Bruni, Richard Lietz, and Frederic Makowiecki took the victory — the last for an all-pro GT team at Le Mans, at least for the foreseeable future. They completed 349 laps on the day and won by 49.4s.

AF Corse’s two Ferrari 488 GTE Evos gritted their way to a 2-3 finish, with the No. 51 Ferrari of Alessandro Pier Guidi, James Calado, and Daniel Serra in second, and the No.52 Ferrari of Miguel Molina, Antonio Fuoco, and Davide Rigon in third.

The No. 92 Porsche (Michael Christensen, Kevin Estre, Laurens Vanthoor) consolidated fourth after a devastating puncture in the morning, and the No. 74 Riley Motorsports Ferrari (Felipe Fraga, Sam Bird, Shane van Gisbergen) took the flag in fifth. Corvette Racing’s dreams of a final Le Mans win in the class were dashed as the day wore on, with both cars retiring before the flag.

GTE Am was won by the No. 33 TF Sport Aston Martin Vantage AMR of Ben Keating, Henrique Chaves, and Marco Sorensen, who seized the lead at halfway and drove on to victory from there.