The 992-generation Porsche 911 GT3 R is here and it’s not surprisingly more powerful and track-competent than ever, a well-executed chess move of fortuitous timing, given that GT3 cars are about to take over from GTE at Le Mans. This is Porsche’s purpose-built GT3-class race car that will be eligible for sports car series all around the globe. In true Porsche fashion, its pièce de résistance sits in its trunk: a 4.2-liter flat-six engine capable of cranking out up to 565 horsepower. Porsche also optimized the aerodynamics and balance of its latest 911 GT3 R to make it as competitive as possible for as wide a range of drivers as possible.

The 911 GT3 R features an upgraded version of the 992-gen 911’s water-cooled, naturally aspirated flat-six engine that’s been increased in displacement from 3,997cc to 4,194cc. Porsche says it optimized the torque and power curve across the rev range in this upgraded engine, which should result in an easier-to-control car.

That engine still sits in the rear but has been tilted forward 5.5 degrees to make way for a larger underbody diffuser. Like the current 911 RSR, this new GT3 R features an elevated underbody and smooth undertray. This directs as much clean air from the front of the car to the rear diffuser as possible in order to keep the rear as planted as possible under braking. The wheelbase has been extended to further reduce the load on the rear tires. The GT3 R also features a more efficient swan-neck rear wing that allows for cleaner airflow under the wing. 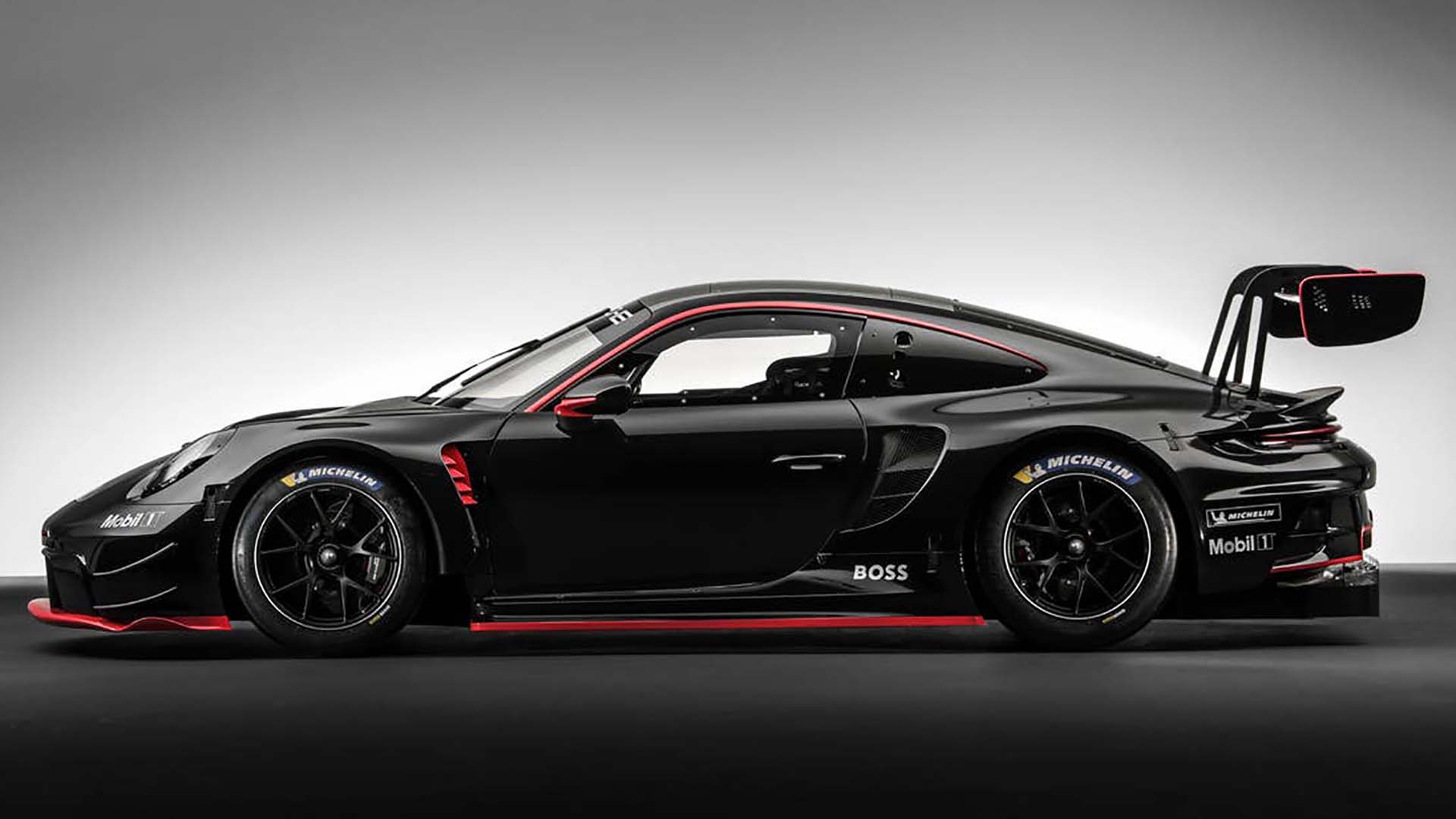 Other components such as the alternator and air conditioning compressor were moved forward and down in front of the engine in the name of improving the car’s weight balance. Even the driver sits closer to the middle now, thanks in part to a new roll cage designed to meet tougher FIA side-impact crash regulations. Likewise, Porsche says they’ve been able to shave roughly a second off of a driver change thanks to the GT3 R’s revised, easier-to-fasten six-point harness design.

Additionally, the engine uses the paddle-shifted sequential six-speed constant-mesh transmission and 10.3-inch interior display from the current 911 GT3 Cup race car. Stopping the car is aluminum monobloc racing calipers and vented and slotted rotors from AP Racing six-piston up front and four-piston in the rear. The car also features ABS and traction control that is specifically tuned for racing. 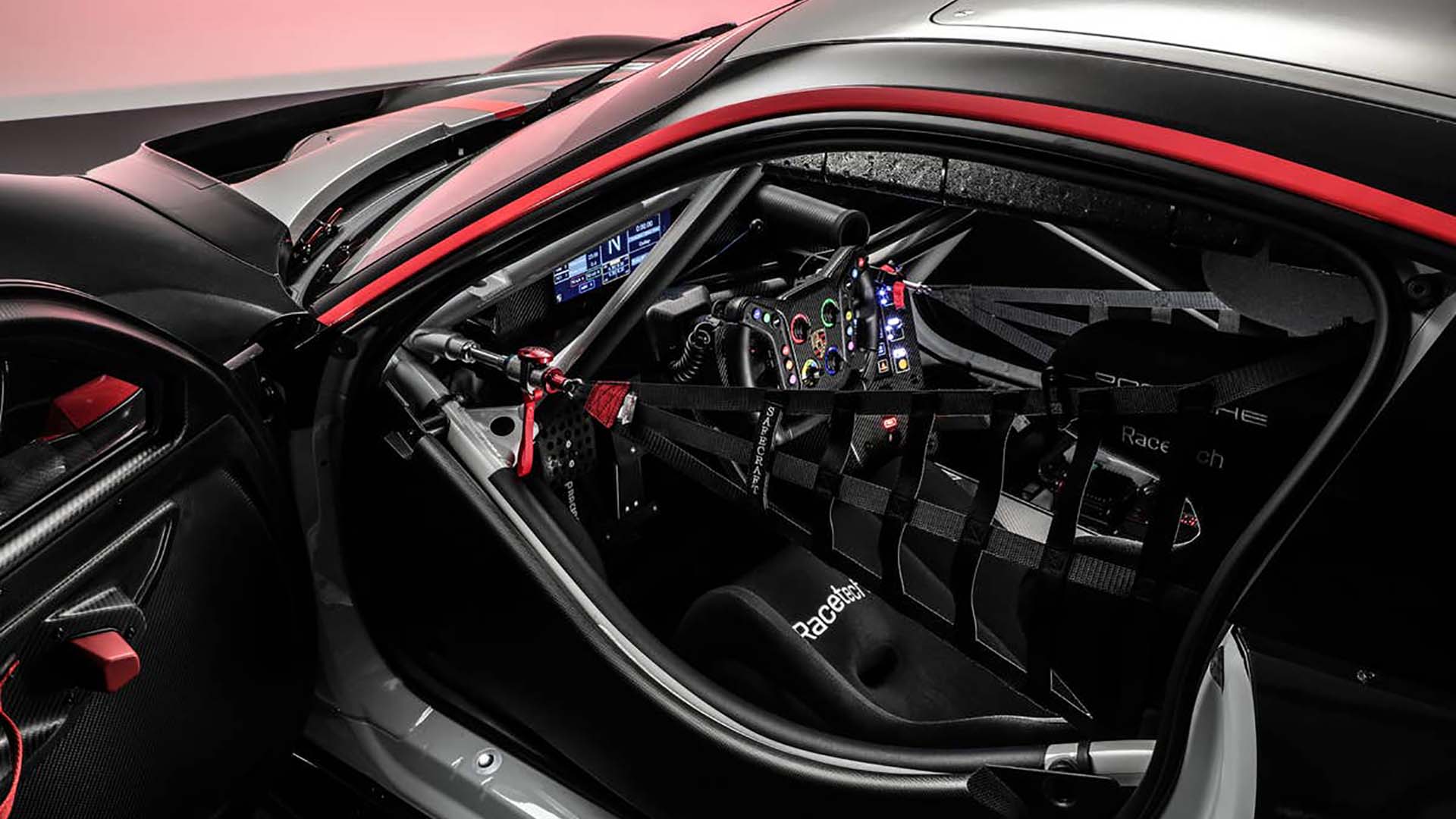 Upgrades to the GT3 R’s suspension were designed to reduce wear on its rear tires and allow for more precise steering. As with the current GT3 R, the new one has a double-wishbone suspension design up front and a multi-link suspension design in the rear. It features freshly revised KW shock absorbers with five adjustment settings plus shims that can help further fine-tweak the suspension without having to completely redo the car’s alignment.

It’s also a featherweight compared to your average roadgoing 911. While it uses the same aluminum-steel composite construction underneath as the road car, almost all of the GT3 R’s body panels are made of carbon fiber, save for the aramid-fiber wheel arches. 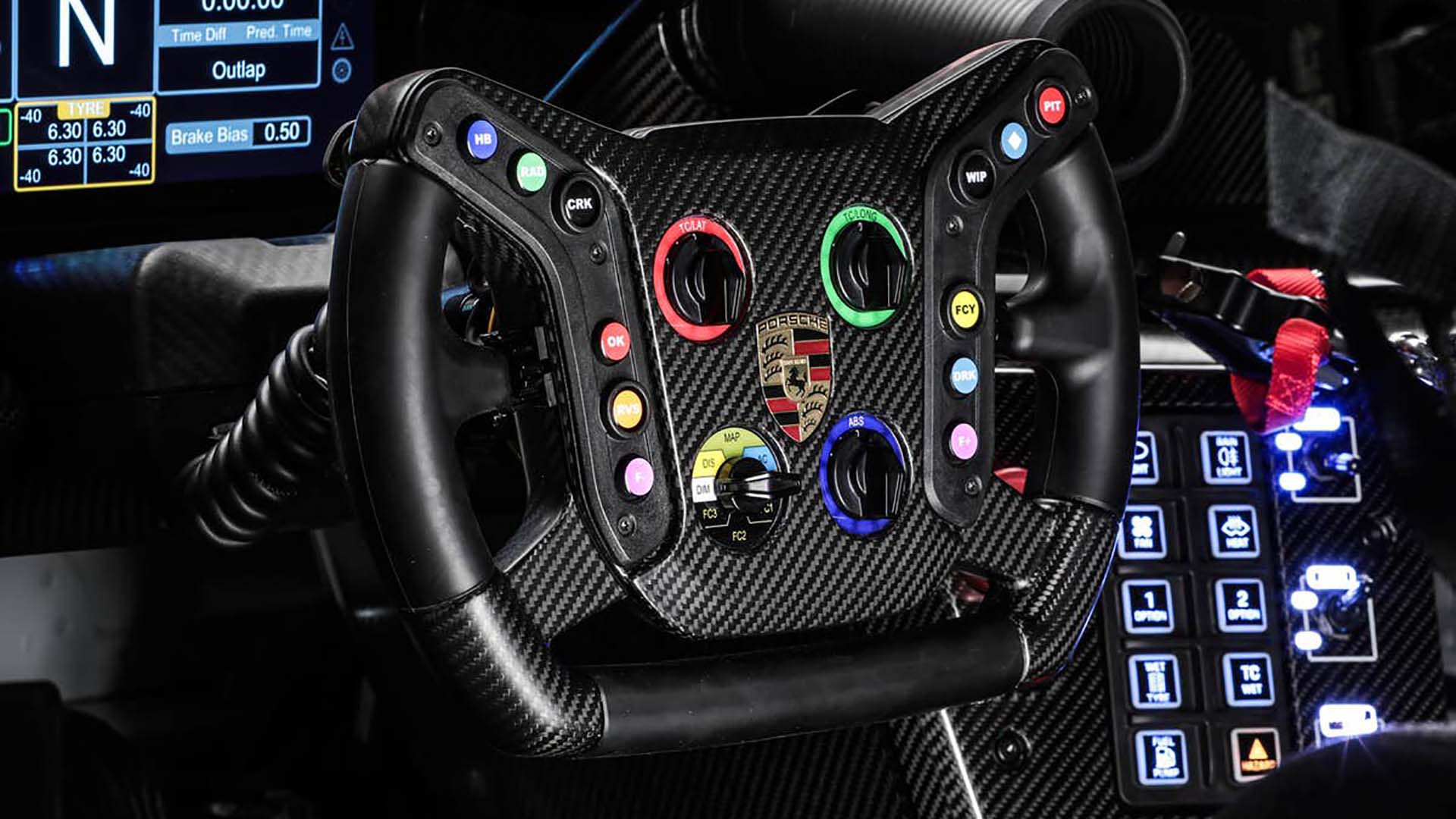 For night racing, the GT3 R and upcoming 963 LMDh prototype racer both utilize “collimator” technology. These headlights act sort of like a reverse magnifying glass to illuminate a large area in front of the car.

GT3 is the top class of sports car racing in North America, and soon, the World Endurance Championship that includes Le Mans will follow suit, making this new 911 GT3 R all the more important for Porsche. The 911 RSR that’s eligible to run at Le Mans is a GTE-class car, the likes of which are being discontinued by the World Endurance Championship in 2024 and replaced with—you guessed it more GT3-class cars in both the pro and amateur GT classes. 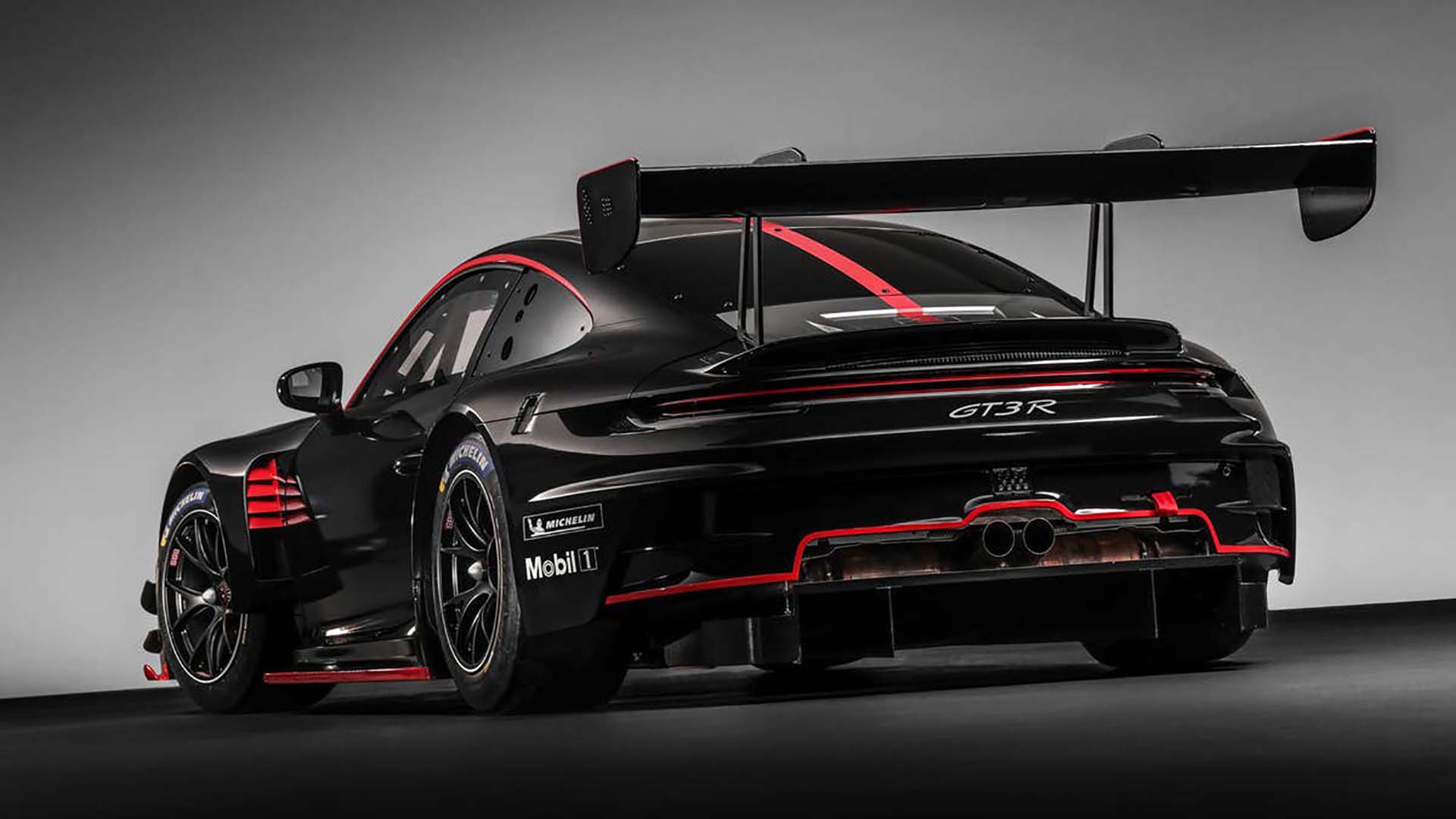 As such, the 911 GT3 R was designed with customer teams in mind who take part in series such as GT World Challenge America and the IMSA WeatherTech SportsCar Championship. For Porsche’s engineers, this meant optimizing the GT3 R to still be fast, but also easier to drive for gentleman racers with varying levels of skill. Those gentleman racers are often the ones funding customer teams, anyway, and Porsche knows it. Additionally, Porsche says the new GT3 R costs less to run than the previous model.

Engineers took special care to ensure that the 992 GT3 R should be competitive under the different balance of performance classifications, as sports car series utilize weights, restrictors, and other methods to make sure various models of GT3 cars are all roughly competitive with each other in a race. 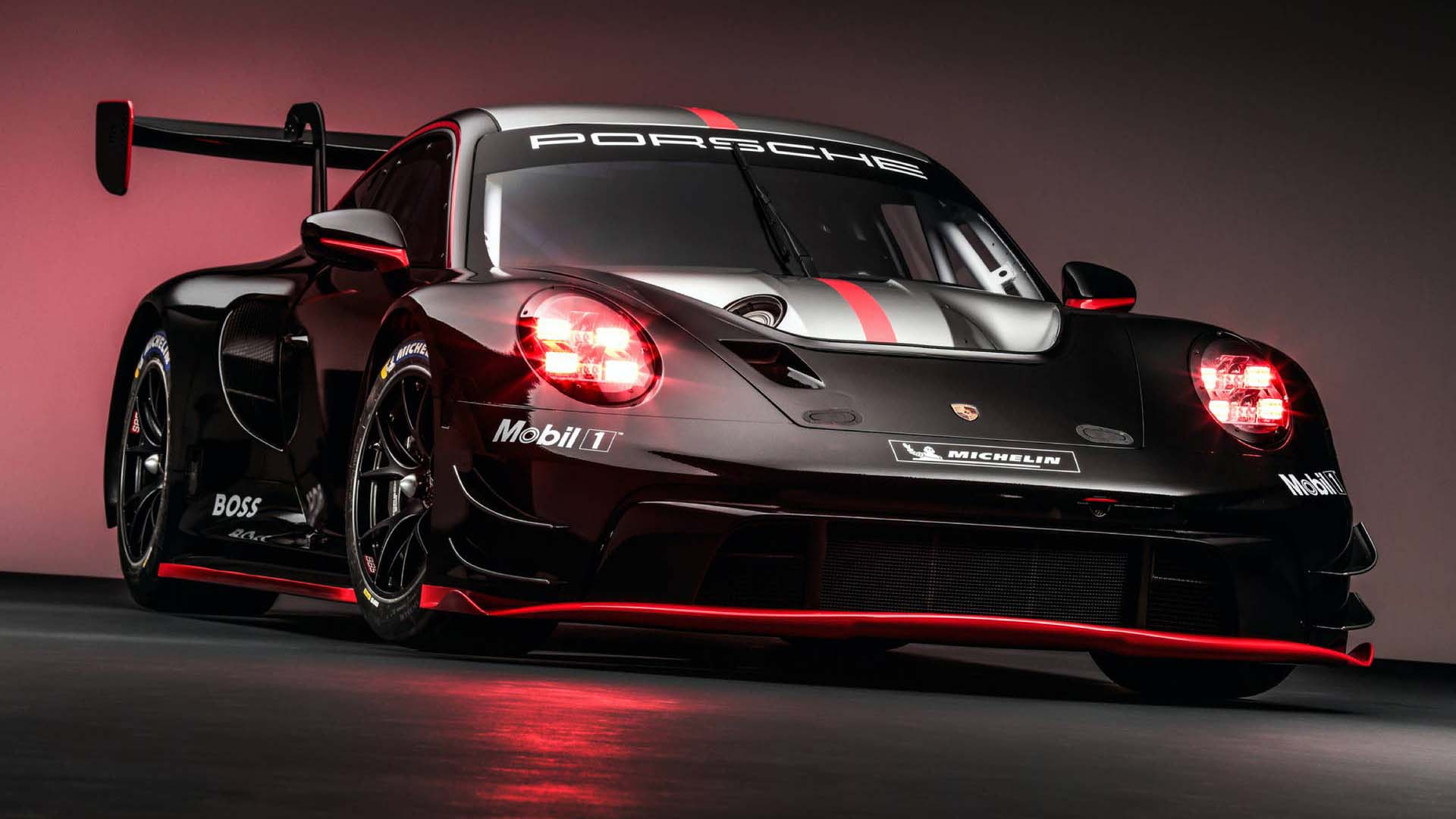 The 992 GT3 R is eligible for GT3-class competition starting in 2023, and you can buy one through Porsche Motorsport North America for $567,210, with optional extras available should you so desire. As such, we’ll see the new GT3 R make its North American racing debut in IMSA’s 2023 24 Hours of Daytona.