The 2023 Porsche 911 GT3 RS is clear in its intentions, it is uncompromisingly designed for maximum performance. The 518 hp road-legal high-performance sports car takes full advantage of technology and concepts from motorsport. Even beyond the high-revving naturally aspirated engine with racing DNA and intelligent lightweight construction, it is, above all, the cooling and aerodynamic systems of the 911 GT3 RS that connect it most directly with its motorsport brother, the 911 GT3 R.

The basis for a significant performance boost is the concept of a central radiator an idea that was first used in the Le Mans class-winning 911 RSR and subsequently, in the 911 GT3 R. Instead of the three-radiator layout seen in previous cars, the new 911 GT3 RS relies on a large, angled center radiator in the car’s nose, positioned where the luggage compartment is located on other 911 models. This has made it possible to use the space freed up on the sides to integrate active aerodynamic elements. Continuously adjustable wing elements in the front and on the two-part rear wing, in combination with a number of other aerodynamic measures, provide more than 900 lbs. of downforce at approximately 124 mph, twice that of the 991.2-generation predecessor and three times as much as a current 911 GT3. At 177 mph, the total downforce is 1,895 lbs or the equivalent of a Porsche 356 A. 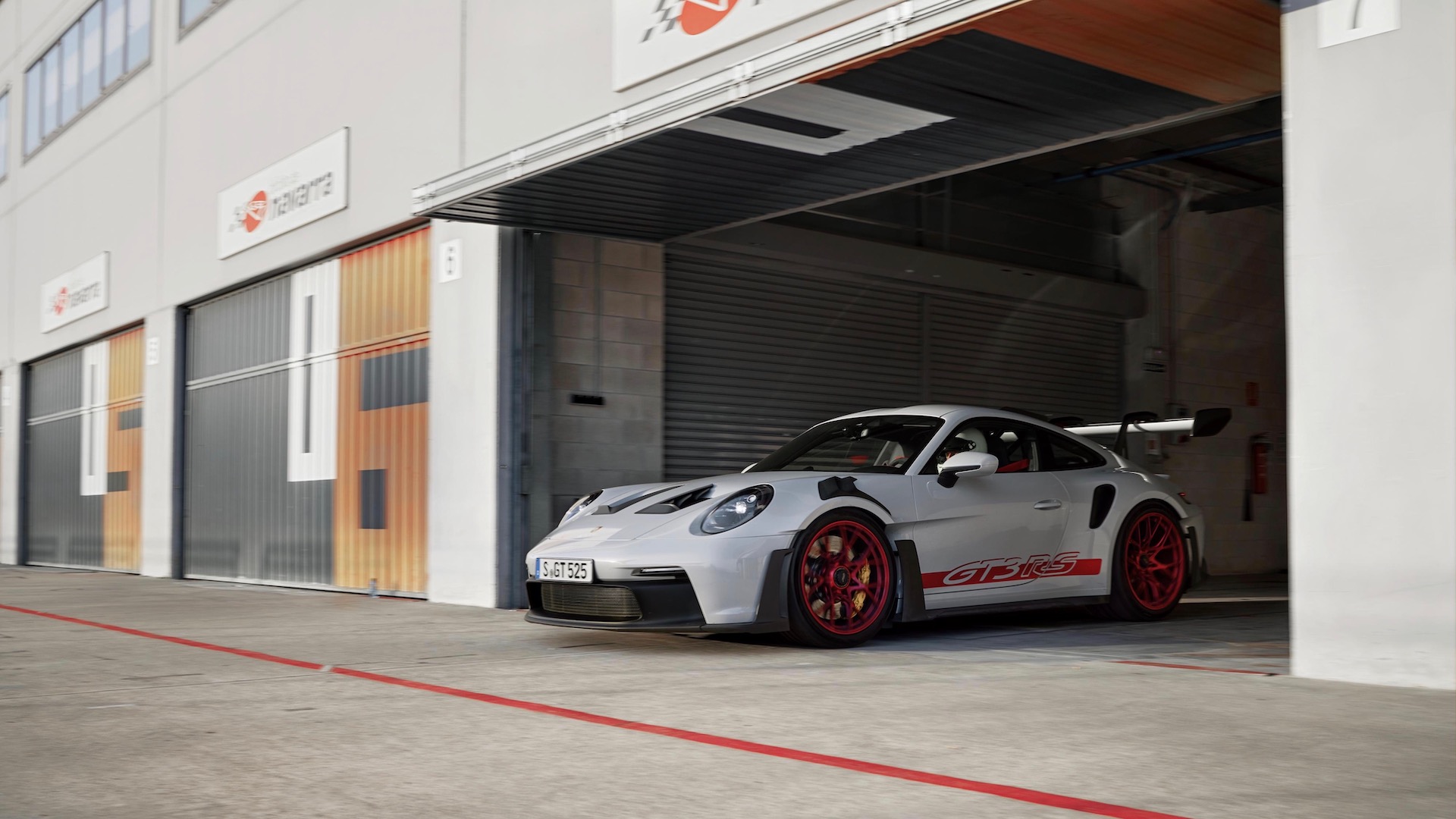 A drag reduction system (DRS) is fitted in a production Porsche for the first time. To achieve low drag and higher speeds on straight sections of the track, the DRS allows the wings to be flattened out at the push of a button, within a specific operating range. During hard braking at high speeds, the airbrake function positions the wing elements at the front and rear to support deceleration by maximizing aerodynamic drag.

The purposeful look of the new 911 GT3 RS is characterized by a large number of functional aerodynamic elements. The most prominent feature of the GT sports car is the swan-neck-supported rear wing, which is significantly larger in all dimensions than the wing of its predecessor. The rear wing consists of a fixed main wing and a hydraulically adjustable upper blade.

For the first time on a Porsche production vehicle, the upper edge of the rear wing is higher than the roof. A front splitter divides the air flowing over and underneath working in parallel with side blades on the front fascia that deflects air outwards. Front wheel-arch ventilation is provided via distinctive louvered openings in the front quarter panels. Inlets behind the front wheels inspired by the iconic Le Mans-winning 911 GT1 reduce the dynamic pressure in the wheel arches.

Air from the centrally positioned radiator flows out of large nostrils on the front lid – further back, fins on the roof direct the air outwards, ensuring cooler intake temperatures in the rear. In the new 911 GT3 RS, the openings in the rear side panel are used exclusively to improve aerodynamics and not to draw in combustion air. The rear wheel arch also features an intake and a side blade for optimized airflow. The rear diffuser is a modified version of that fitted to the 911 GT3. 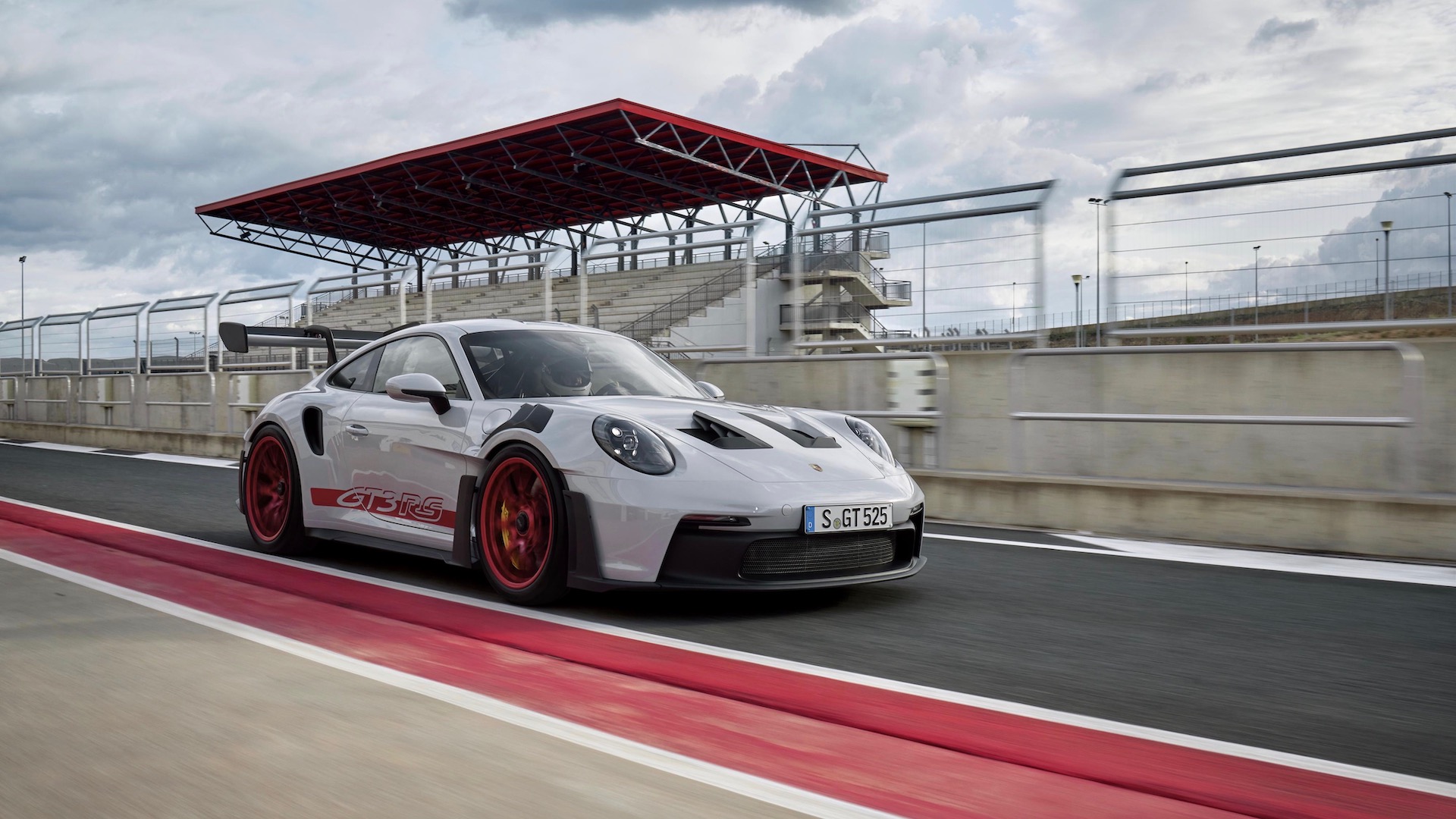 Even the suspension is modified for improved aerodynamics. Because the wheel arches of the new 911 GT3 RS are subject to powerful airflows, the components of the double-wishbone front axle are designed with teardrop-shaped profiles. These aerodynamically efficient links increase downforce on the front axle by around 88 lbs. at top track speed and are otherwise only used in high-end motorsport applications. Front track width increases by 1.14 inches (29 millimeters), necessitating longer double-wishbone front axle links.

To ensure that the downforce balance between the front and rear axles is maintained even when braking from high speeds, the suspension engineers have significantly reduced pitching under braking. On the new 911 GT3 RS, the front ball joint of the lower trailing arm has been set lower on the front axle. The multi-link rear axle has also been adjusted, with modified spring rates. The driver assistance systems and rear-axle steering also have an even more dynamic set-up here. 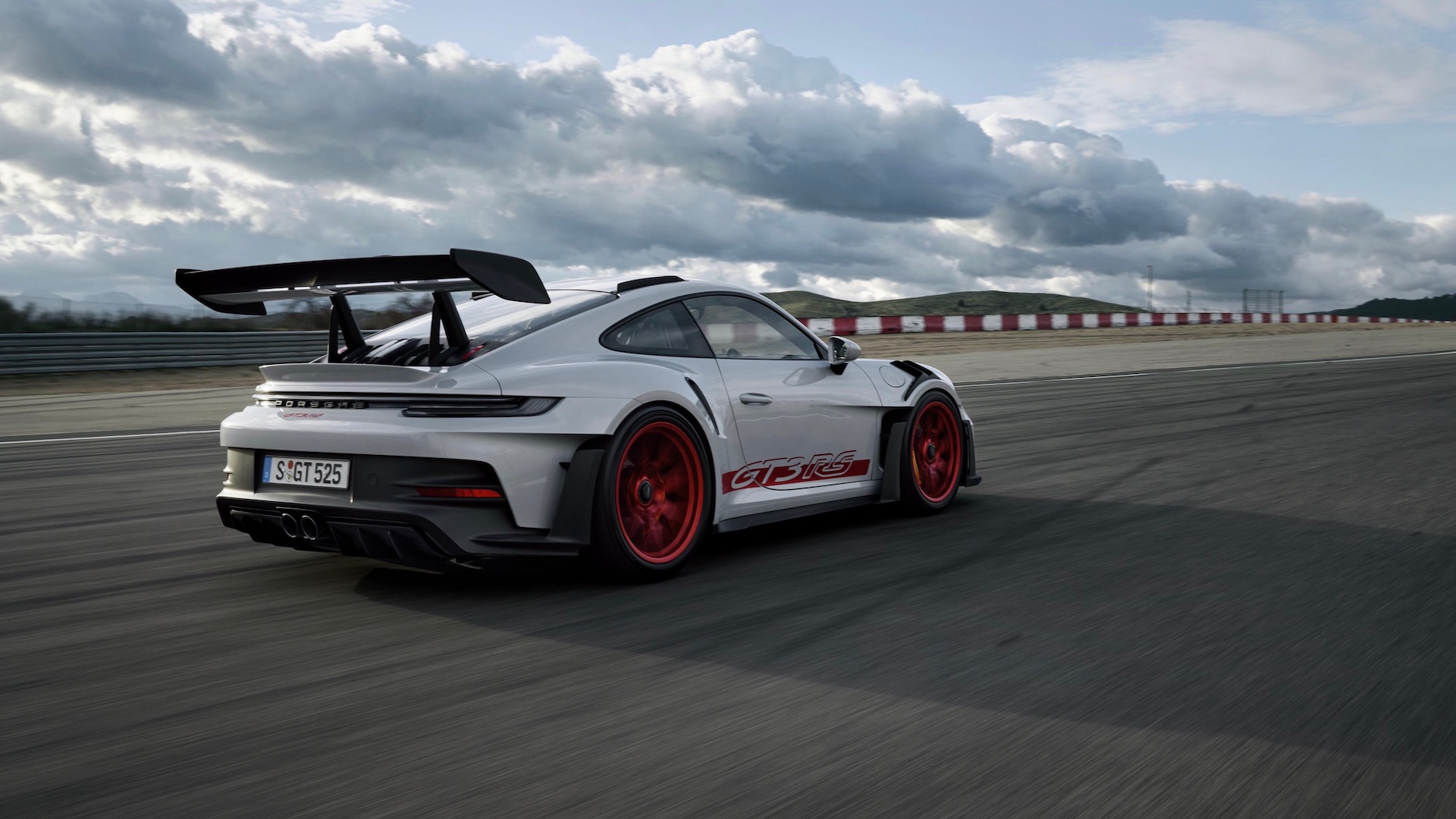 The 911 GT3 RS offers three driving modes: Normal, Sport and Track. In Track mode, the basic settings can be individually adjusted. Among other settings, the rebound and compression damping of the front and rear axles can be adjusted separately and in several stages. The rear differential can also be adjusted via rotary controls on the steering wheel. This is done quickly and intuitively with an operating and display concept also borrowed from motorsport.

Four individual rotary controls and a button for the Drag Reduction System (DRS) are located on the steering wheel. These rotary controls are clearly displayed via graphics in the instrument cluster during the adjustment process. The 911 GT3 RS also features the track screen already familiar with the 911 GT3. At the touch of a button, the driver can reduce the digital displays on the two seven-inch side displays to essential information only. The gearshift indicators to the left and right of the analog tachometer have also been taken from the GT3. 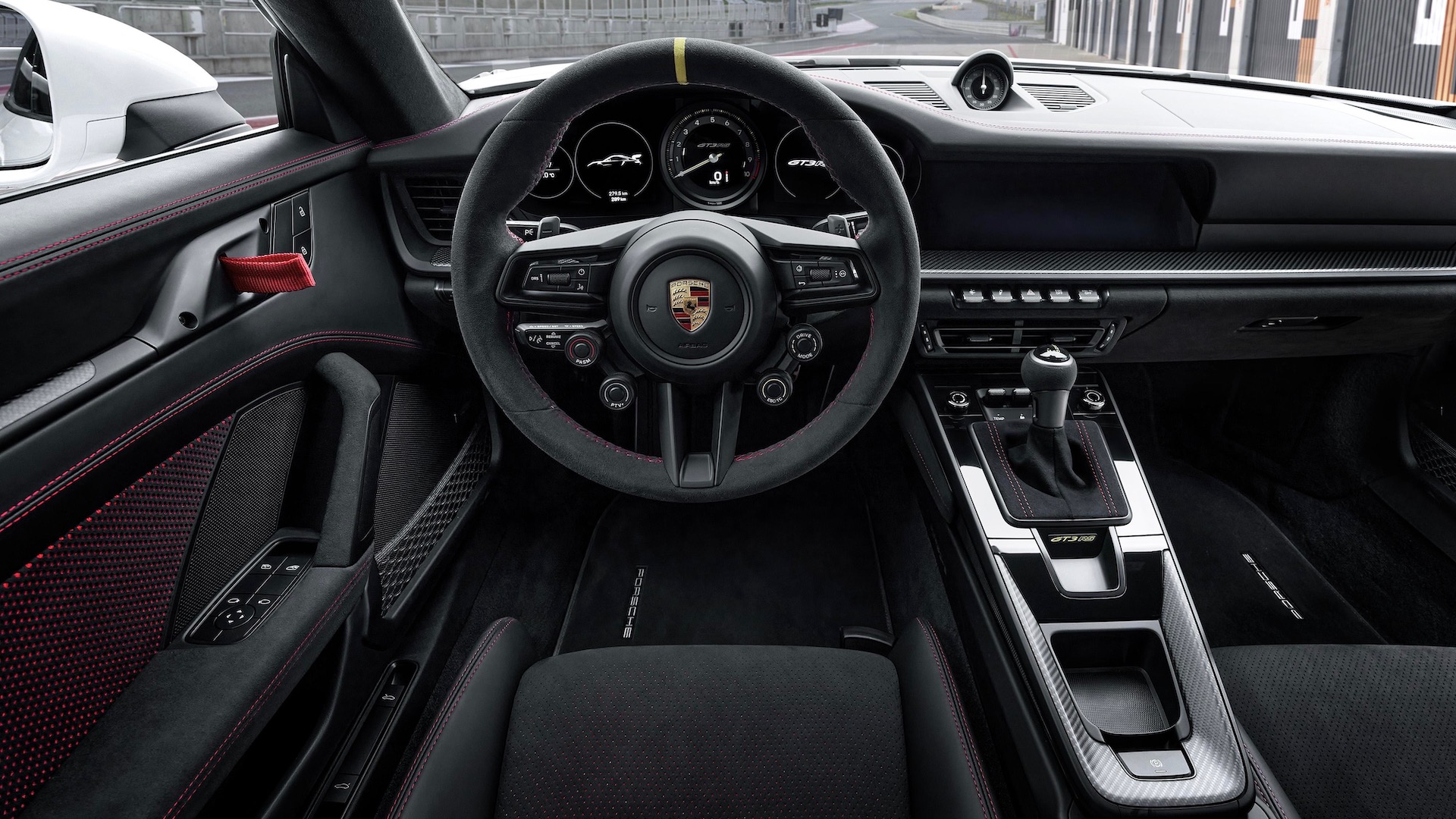 The 4.0-liter high-revving naturally aspirated engine has been further optimized compared with the 911 GT3. The increase in power to 518 hp (911 GT3 – 502 hp) is achieved primarily via new camshafts with modified cam profiles. The single-throttle intake system and the rigid valvetrain are derived from motorsport. Like the 911 GT3, this engine also has six individual throttle bodies; one per cylinder. The seven-speed Porsche Doppelkupplung (PDK) has a shorter overall gear ratio than the 911 GT3 and is aided by air intakes on the underbody to ensure that the transmission can withstand even extreme loads during frequent use on the track. 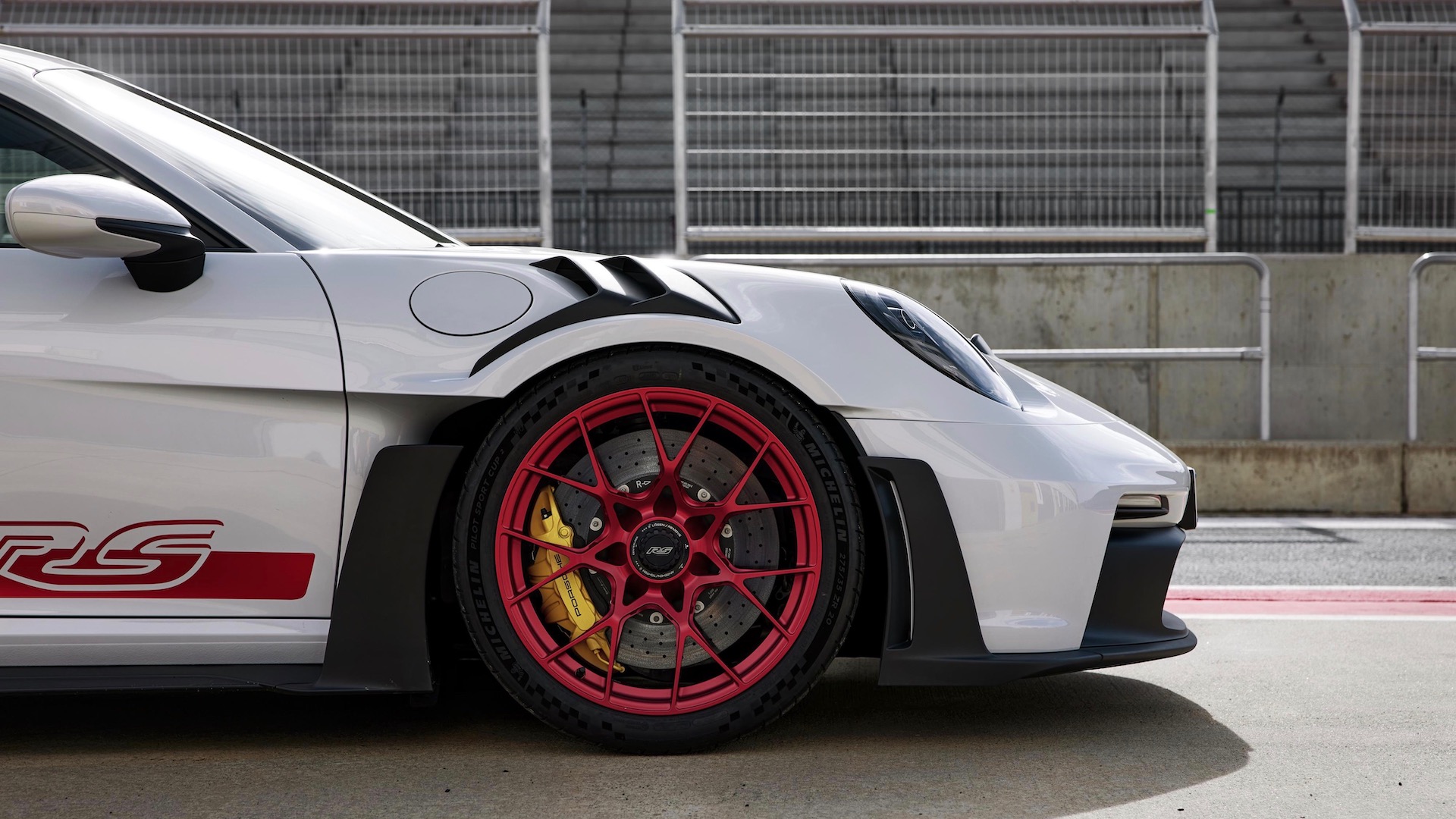 Six-piston aluminum monobloc fixed-caliper brakes and brake discs with a diameter of 408 mm are used on the front axle. Compared with the 911 GT3, the piston diameters have been increased from 30 to 32 mm. In addition, the thickness of the discs has been increased from 34 to 36 mm. The rear axle continues to be fitted with 380-mm brake discs and four-piston fixed-caliper brakes. 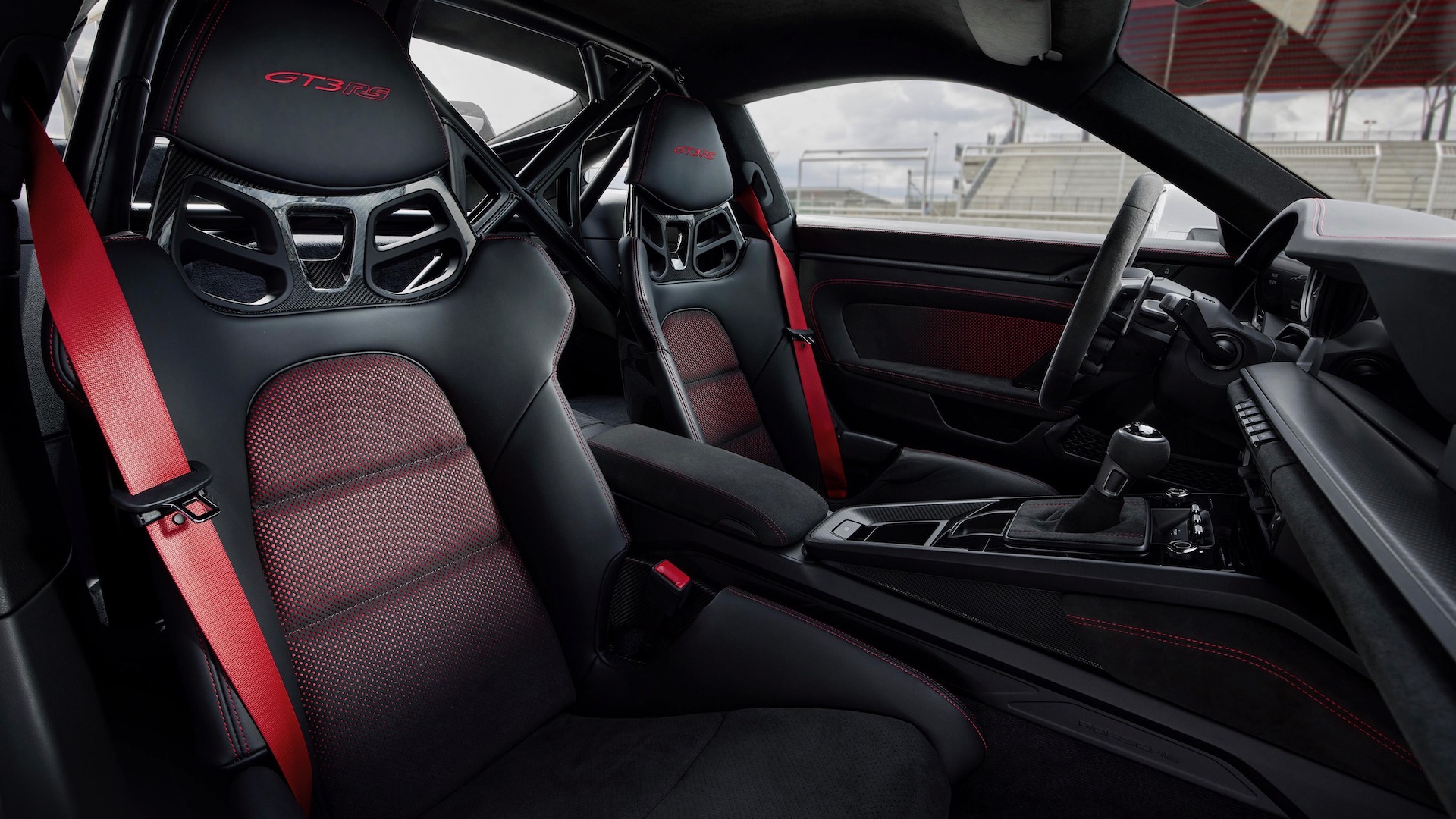 Intelligent lightweight construction has been a basic principle of all RS models ever since the legendary 911 Carrera RS 2.7. Thanks to an array of lightweight construction measures such as the extensive use of carbon fiber reinforced plastic (CFRP), the 911 GT3 RS weighs in at only 3,268 lbs.. The doors, front quarter panels, roof, and hood, for example, are made from CFRP. Lightweight CFRP is also used in the interior, including the standard full bucket seats, trimmed in black leather and Race-Tex joining carbon fiber trim throughout the interior to characterize the pure, sporty ambiance.