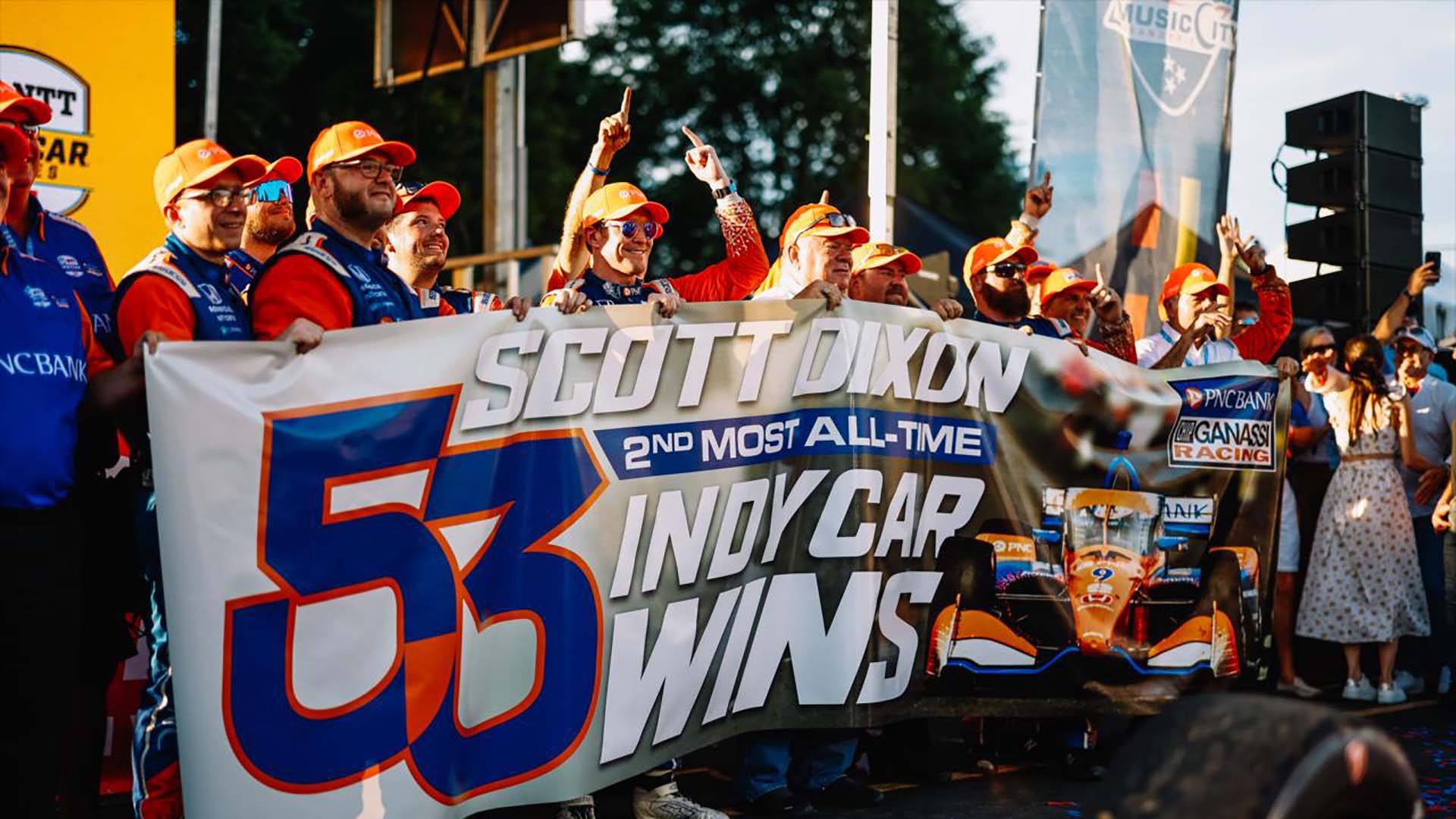 On Lap 29 of the Big Machine Music City Grand Prix, Scott Dixon was running last after a penalty for emergency service of his wounded car in a closed pit. Fast-forward 51 laps and Dixon was celebrating his 53rd career INDYCAR SERIES victory, breaking a tie with Mario Andretti for second on the all-time list – in an improbable triumph Sunday on the streets of Nashville. Dixon earned his second victory of the season in the No. 9 PNC Bank Chip Ganassi Racing Honda and pulled to within six points of NTT INDYCAR SERIES championship leader Will Power with just three races remaining. Dixon is trying to match the series record of seven titles held by A.J. Foyt, who also leads with 67 career victories. 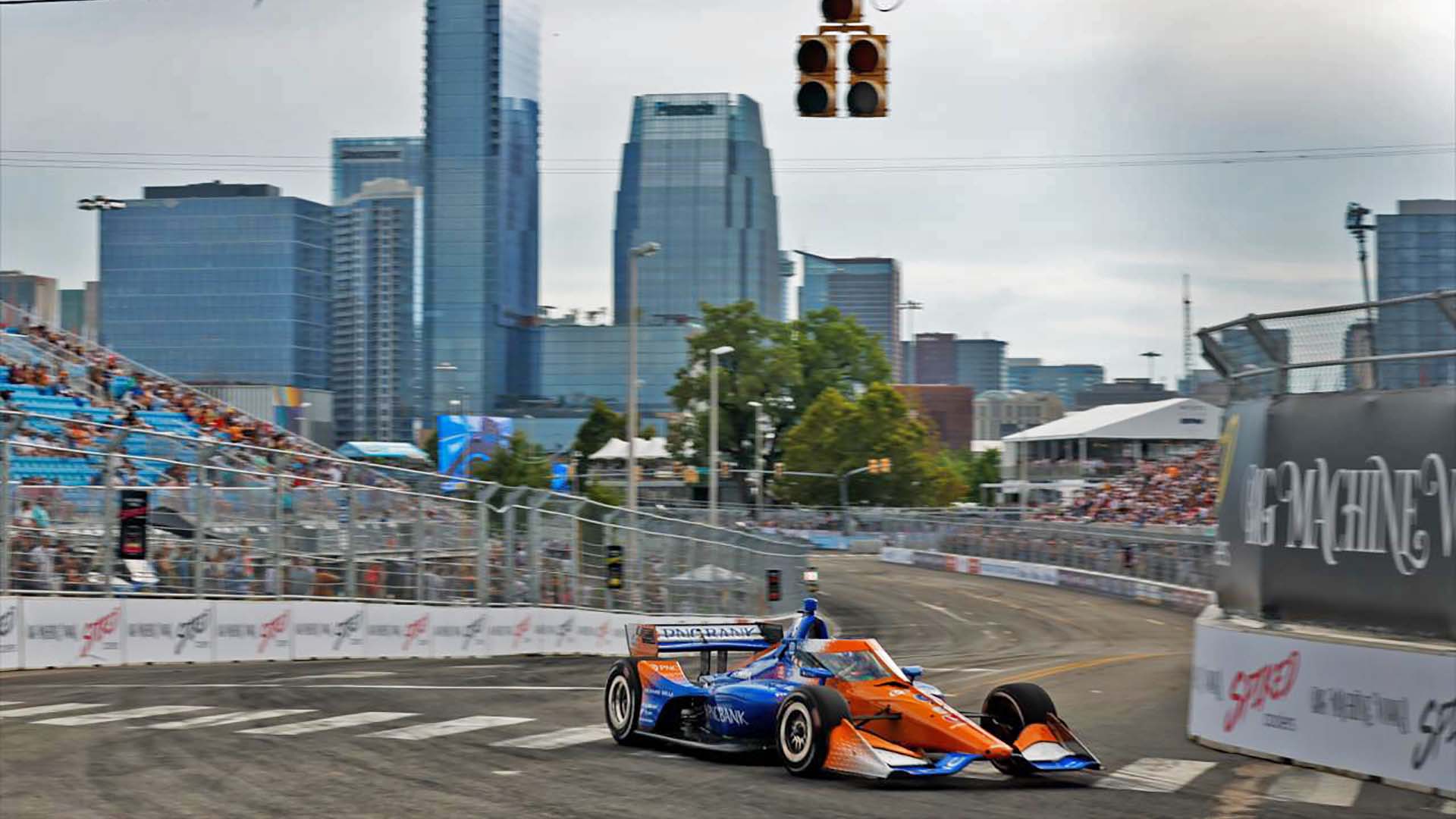 “Kudos to the team,” Dixon said. “We had a big crash there that took half the floor off the car. We had to take four turns of the front wing out, so we had no grip. Nashville is so awesome.”

Scott McLaughlin finished second in the No. 3 DEX Imaging Team Penske Chevrolet, just .1067 of a second behind Dixon after a two-lap chase for the checkered after a late red flag. It was the closest margin of victory this season on a street course or road course and the fourth-closest finish on those circuits in INDYCAR SERIES history. Reigning series champion Alex Palou finished third in the No. 10 NTT DATA Chip Ganassi Racing Honda, with the left front wing main plane flapping over bumps after contact earlier in the race. Alexander Rossi rallied from multiple instances of contact during the race that put him a lap down to finish fourth in the No. 27 NAPA AUTO PARTS/AutoNation Honda. His Andretti Autosport teammate Colton Herta also recovered from early contact and went a lap down to finish an improbable fifth in the No. 26 Gainbridge Honda. 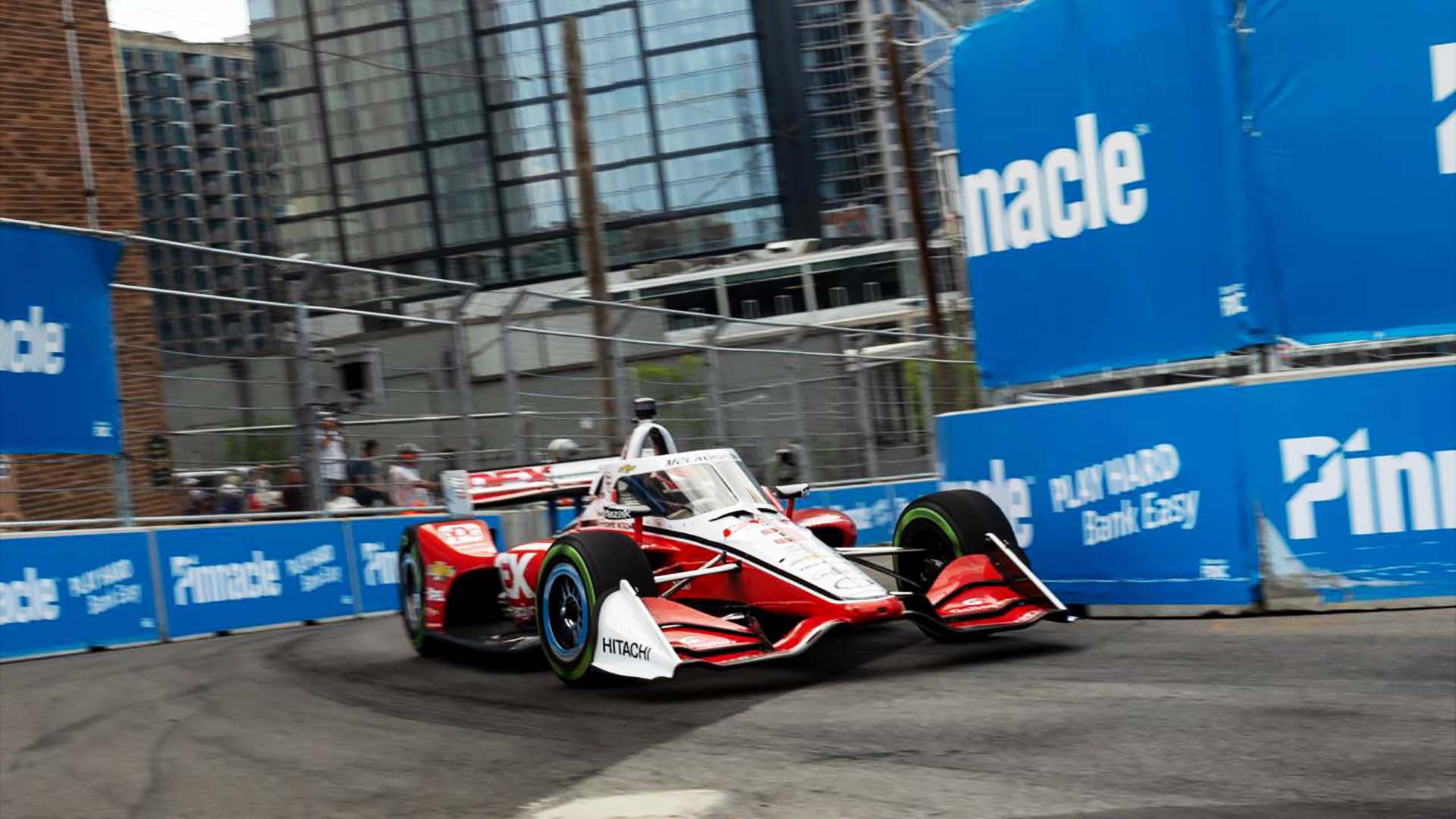 The furious finish after 80 laps of full-contact, no-prisoners racing created a points race tighter than a piano wire with three races remaining. Just 33 points separate the top five in the standings, with a minimum of 51 points available to a race winner. 2014 series champion Power, who finished 11th in his damaged No. 12 Verizon Team Penske Chevrolet, leads Dixon by six points. 2022 Indianapolis 500 presented by Gainbridge winner Marcus Ericsson, who finished 14th in the No. 8 Huski Chocolate Chip Ganassi Racing Honda, is 12 points behind Power in third. Nashville-area native Josef Newgarden, who finished sixth in the No. 2 PPG Team Penske Chevrolet, is 22 points behind Power in fourth. And Palou is hanging tough in his effort for a second straight title, 33 points behind Power in fifth. 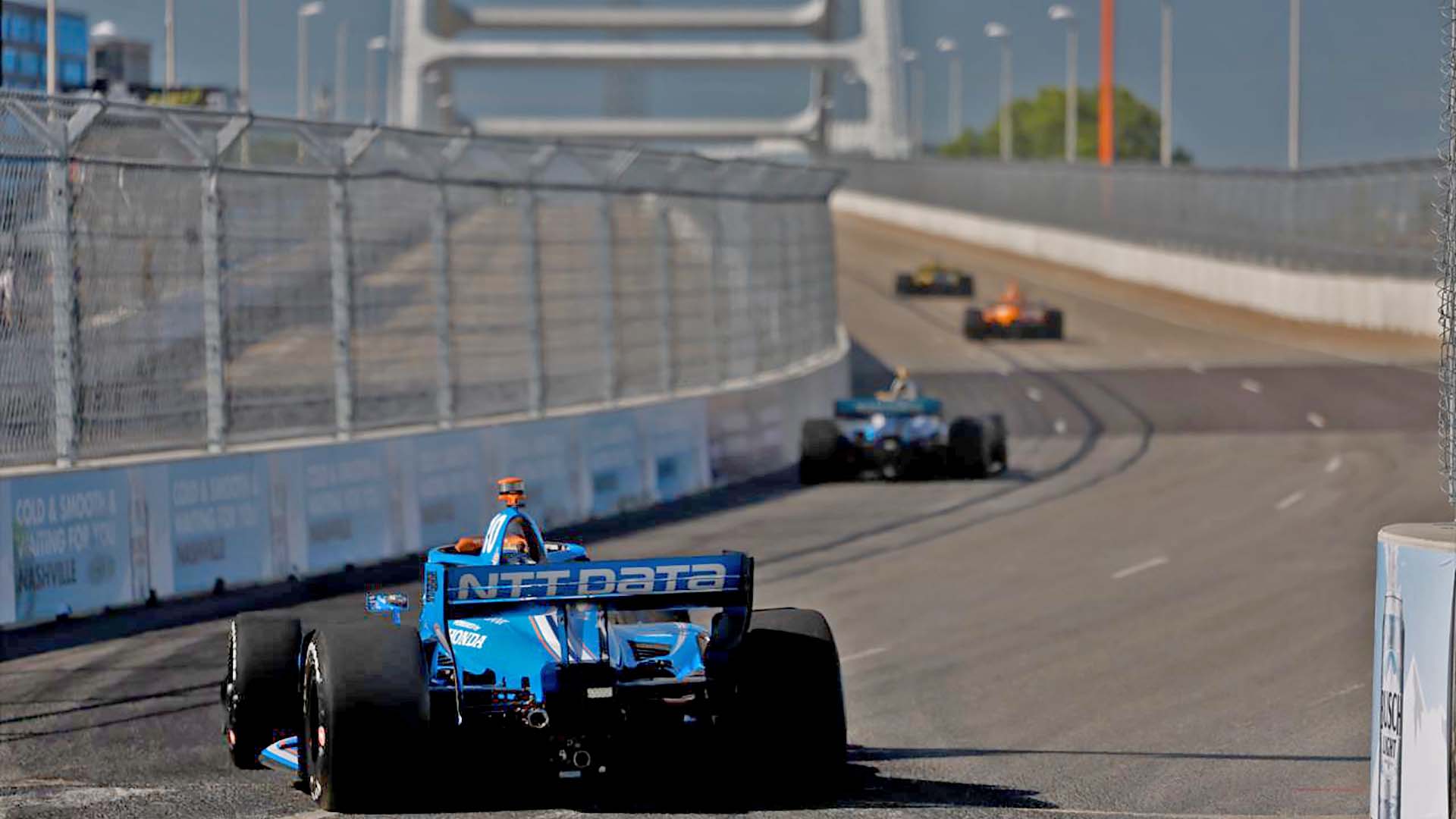 It was a second straight year of chaos, dice rolling, and a winner in Victory Lane that hardly anyone saw coming after 80 laps of racing on the bumpy, tight, 11-turn, 2.1-mile temporary street circuit that includes two trips per lap on the Korean War Veterans Memorial Bridge over the Cumberland River. The two-lap dash for the checkered was created on Lap 76 when Newgarden and Romain Grosjean in the No. 28 DHL Honda made contact in Turn 9 on a restart as Newgarden moved up the field, with Grosjean ending up in the tire barrier.

Race officials decided to throw the red flag on Lap 77 so the eventful race, which also included eight caution periods, could end with one more thrill show. Both Dixon and NTT P1 Award winner McLaughlin had similar amounts of push-to-pass left for the restart, so this would come down to a two-lap duel of who blinked first. Neither did in a masterful display of driving skill, but Dixon timed the restart perfectly and built a small gap on McLaughlin. As the two New Zealand drivers marched around the circuit for the final time, McLaughlin wasn’t close enough to Dixon to slingshot past him on the bridge. Dixon bobbled slightly on the final corner before the checkered, but McLaughlin couldn’t sneak past. 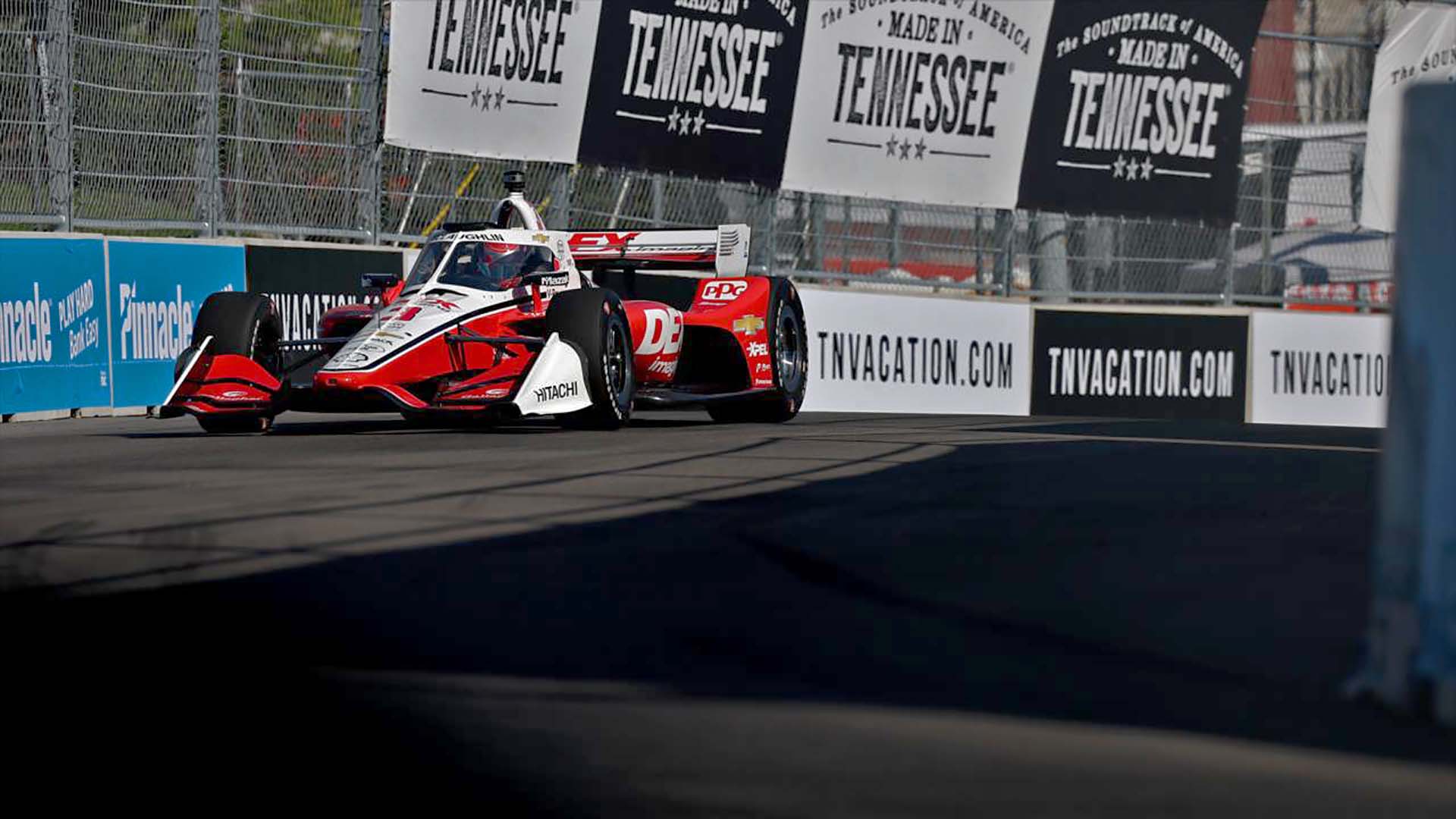 “We were worried about him because I knew he would take chances,” Dixon said of McLaughlin. “He kind of has to with the standings at the moment. He was super fast, as well. He had fresh tires, too. I was a sitting duck. If there had been a lap or two more, it would have been really tough to do.”

McLaughlin said: “We were alongside there across the finish line. But man, we were 16th on that last pit exchange and had an awesome restart, and then the car was fast. Just fell short at the end. Congrats to Scotty. Always dreamed of racing him to the finish. That was a proper duel.” 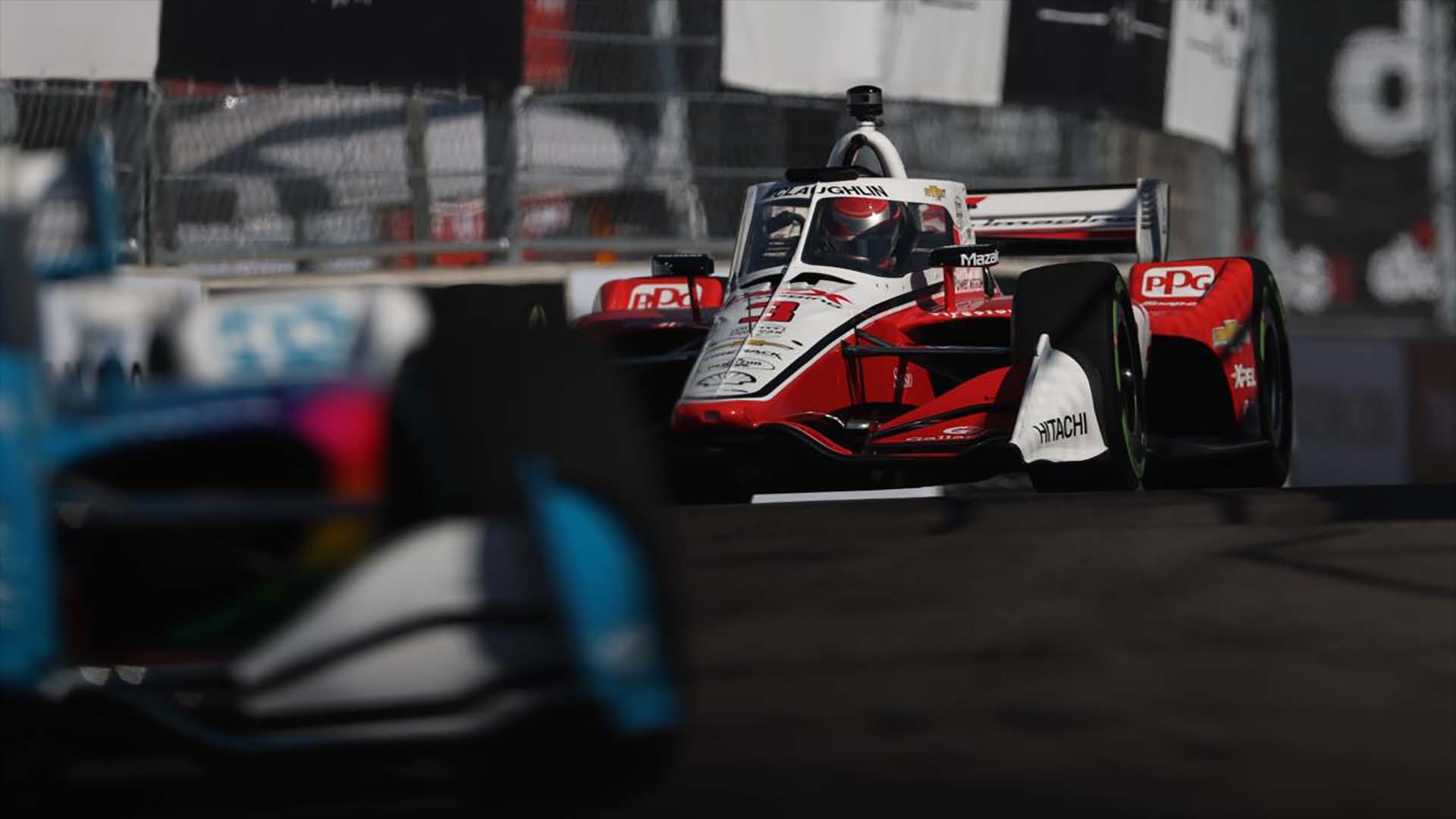 Palou wasn’t far behind at the finish, either, finishing just .6100 of a second behind Dixon. In fact, the top four cars all finished within one second, as Rossi was just .9412 of a second behind the winner. Dixon, who started 14th, was collected in a chain-reaction incident on Lap 26 that damaged his floor and required emergency service in a closed pit on Lap 27, and he was ordered to the rear of the running order as a penalty. Dixon made his final pit stop under green on Lap 51 and caught a break one lap later when the No. 21 Bitcoin Racing Team with BitNile Chevrolet of Rinus VeeKay and the No. 15 United Rentals Honda of Graham Rahal made contact in Turn 4 and triggered a caution period. The top 10 cars in the field pitted during that caution, which helped Dixon cycle toward the front of the field. Dixon took the lead for the first time and for good when Newgarden made his final pit stop on Lap 66. 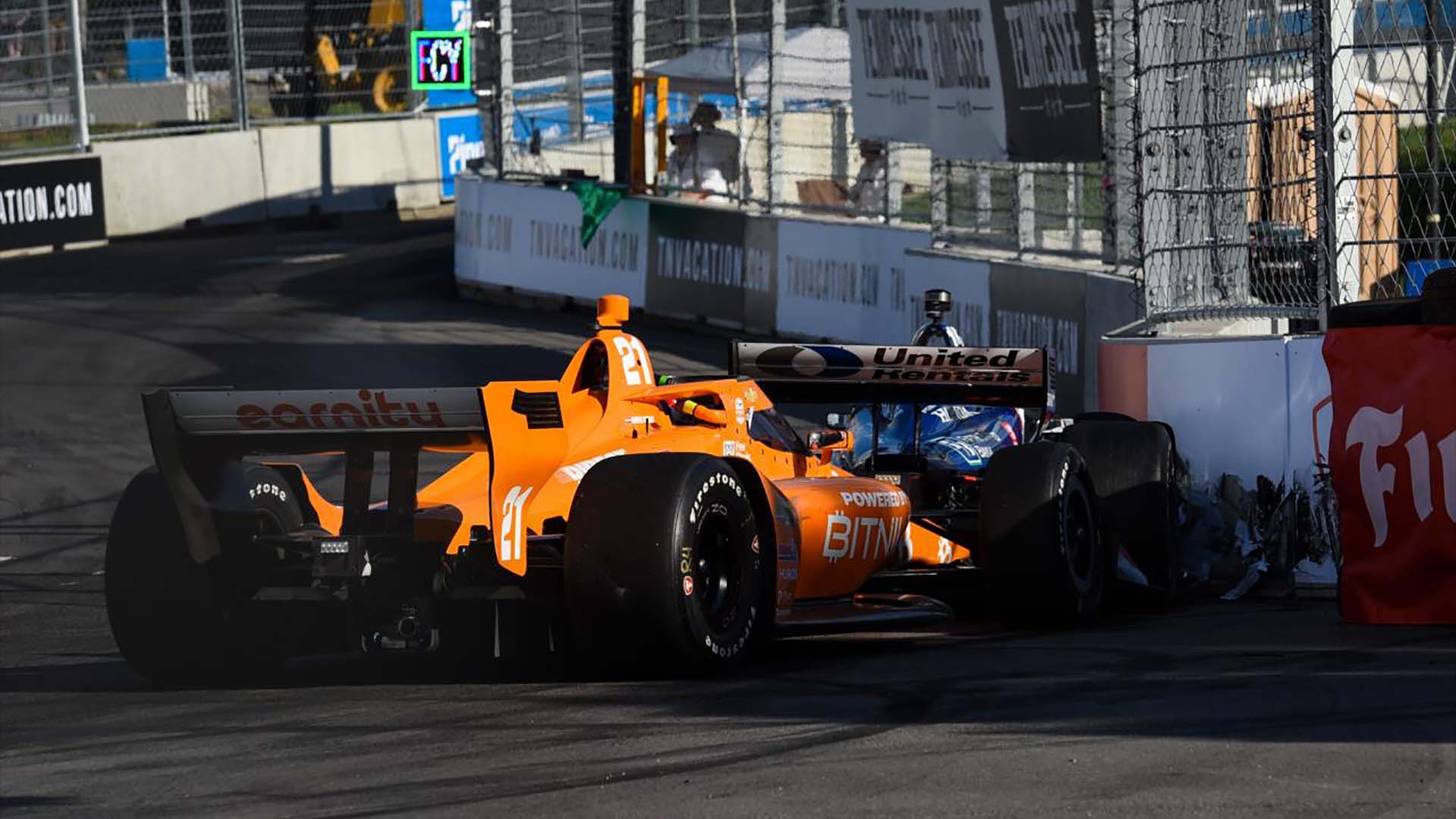 Dixon earned $10,000 from the PeopleReady Force for Good Challenge for the victory, to be split between his team and his charity, St. Jude Children’s Research Hospital. 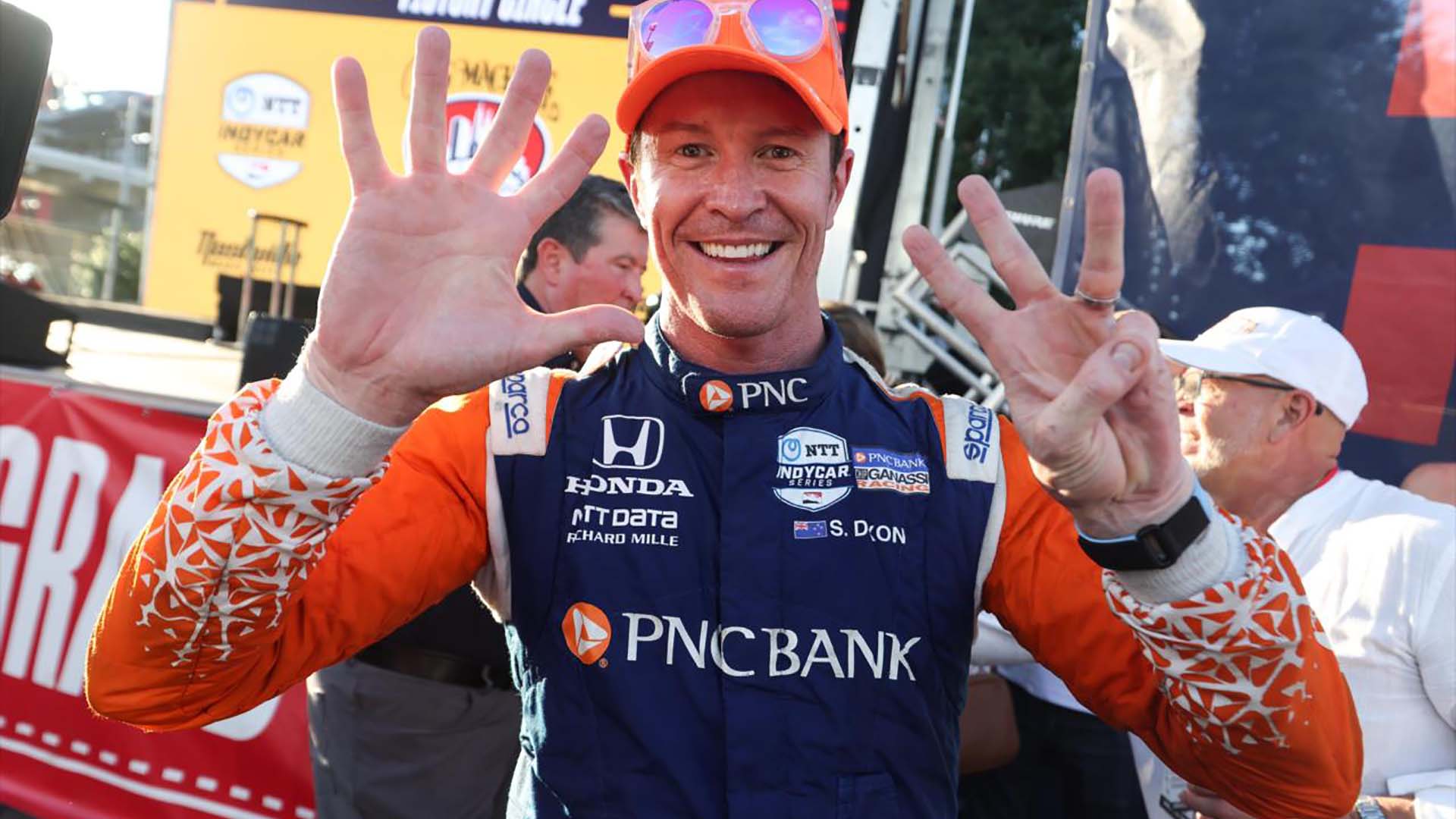 The next NTT INDYCAR SERIES event is the Bommarito Automotive Group 500 presented by Axalta and Valvoline on Saturday, Aug. 20 at World Wide Technology Raceway in Madison, Illinois, just across the Mississippi River from St. Louis. Live coverage on the USA Network and the INDYCAR Radio Network of the last oval race of the season starts at 6 p.m. ET.